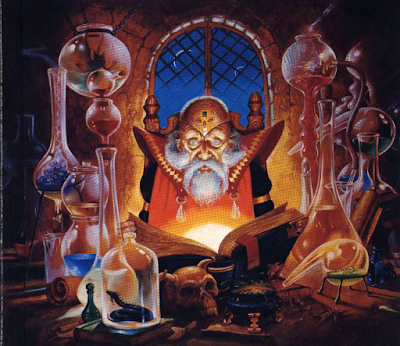 My blogging activities and my "home" Labyrinth Lord Campaign (which plays online over Skype) have both been on hiatus for some time. The last time that particular group played was last September. There are several reasons for the break, chief among them the arrival of two babies -- two of our players have recently become fathers -- and my own mad scramble to get my academic ducks in a row for a major review I'll be subjected to this coming fall (it's not my actual tenure review but it will heavily inform that tenure decision, which lies one additional year in my future). So it has been a busy time full of changes in our non-gaming lives.

Additionally, as I told my group of players via email a few weeks back, I was beginning to experience some DM's fatigue last year. Some of that fatigue may be attributable to a personality quirk of my own: I have this funny thing (in all things I do) where when I reach the "nearly finished" point -- about the 80% complete mark -- and I start to lose interest in a project or undertaking. I have been feeling a bit of that type fatigue with the "home" campaign before the hiatus. As I wrote to the players:


It is not that I "know" our campaign is about 80% done. I do not. There is no way to predict that and I do not have one, set endgame in mind -- I just know who's out there doing what to whom, so I will judge how those personas respond to your party's inevitable meddling . . .

That said, I tend to think that old-school D&D characters should retire from adventuring around 9th or 10th level -- so around then I would expect your characters to be running things (probably not all of Ara -- the Noffellians would secede if you guys took over -- but surely Rogaland, a temple of Endra, a bard's college. etc.) and then we might think about next steps. I could run another campaign in Ara, or . . . . Satan knows.

However, what I didn't tell the players (because I didn't realize it yet) is that part of the issue also lies with the medium through which we play: Skype. I do not mean to single Skype out here, what I mean to refer to is the general difference between playing long-distance vs. playing live, in person, at a table in the same room. For me, there is simply no substitute for that latter experience. I know this because as I have reported before, I am having a grand old time running my public game at the local bookshop. There is a certain magic that can occur when folks are in the room together, and I think certain aspects of character interactions and subtle plot nuances are more easily conducted and conveyed live.

All that said, my online group played again last night and had a thrilling, awesome session (the 87th session of our campaign). It was so fun that we are meeting again in a week. The group teleported their way into a crypt buried beneath the Free City of Kaladar in order to do battle with a vampire and to seek an interdimensional gate they strongly suspect lies somewhere in or near that crypt.

In preparing to go after that vampire, the PCs enlisted the services of a wizard who briefly visited the vampire's lair, allowing himself to be transported there via a magical archway that appears to transmit living beings only, depositing them naked at the destination with none of their gear. This wizard, Tim, was instantly attacked and life-drained by the waiting vampire, and then he teleported himself back out of the vampire's lair to rejoin the party. They all retreated back to the above-ground city to scry the location Tim had seen via a crystal ball, so everybody could be teleported back in to do battle with the vampire.

This raised a question for me and my players: how, besides a crystal ball, does one scry in Labyrinth Lord?

None of us could find any direct reference to scrying except in the spell description for teleport (LL p. 40, AEC p. 80). Any thoughts?

P.S. I checked out my DMG this morning and found that EGG says this about scrying and anti-scrying: 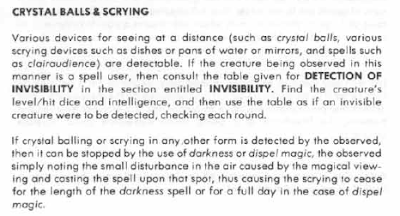