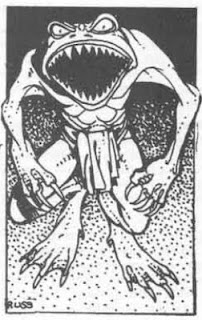 As a continuation of my previous post on The Great Western Swamp, here are the gaming stats for some more exciting NPCs and deadly monsters who inhabit the notorious Swamp.  The first two entries are for Rogath, a fairly well-known Ranger from The Western Lands, and Rabbit-Head, a guide from Marsh Town; please note in this connection that I have recently decided to go with the two Ranger options outlined in Brave Halfling’s Delving Deeper: Ranger, a superb product I highly recommend.  [See also James Maliszewski’s review of DD: Ranger.]

Rogath originally hails from Noffel, which is probably why he favors the long sword as a primary weapon.  Rogath’s current “home” is actually Tradefair, the largest city of The Western Lands, but he is not there very much; he prefers to wander the Swamp.  In case this isn't already obvious, his giant- and humanoid-fighting abilities extend to Swamp Trolls.

Rabbit-Head is a relatively young, severely mentally unbalanced, yet exceptionally talented swamp guide who mainly operates out of Marsh Town (Sluggerton).  Rabbit-Head is not much interested in money, and prefers to barter for his services, demanding unique trinkets, treasures and services as payment for his Swamp guide work.  Due to his unstable personality, Rabbit-Head has on occasion abandoned clients in the middle of the Swamp, and has even once or twice sold them out to brigands, but he is not so much conniving as whimsical, and more often than not he can be trusted to complete the guiding and scouting jobs he contracts for.  Rabbit-Head’s greatest weakness as a hireling may be his penchant for pickpocketing his clients while they sleep, something he does more for fun than strictly for gain.  Rabbit-Head is a physical coward and will typically try to avoid confrontation or combat at all costs, but, as a result of his cowardice, he is very good at evading indigenous Swamp aggressors, a benefit he passes on to parties he travels with (see +1 bonus to Encounter Table Rolls mentioned in the previous post).  All in all, Rabbit-Head is considered one of the best Swamp guides to be found in Sluggerton, and he therefore maintains a busy schedule.

Next, a few key new monsters that dwell in the Great Western Swamp: the frog-like Blaag, the man-eating Swamp Tiger and, in case you missed it in my post about Arandish Trolls, the dreaded Swamp Troll.

Named, perhaps, for the guttural sound they make when attacking, the blaag are small, frog-like humanoids with razor-sharp teeth and a taste for human flesh.  They will go after food (preferably humans and their brethren) voraciously and without any thought of retreat.  They are usually encountered in groups of 3-36.  Their principle weakness is their method of attack, a lunging bite (they can leap up to 20’) that only allows each blaag to attack every other turn, albeit at a +1 to hit.  Blaag are speedy swimmers and will use water to their defensive advantage, diving to retreat and surfacing to leap and attack. 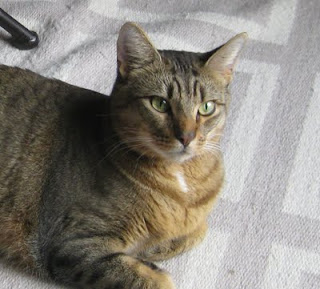 Swamp Tigers are very similar to typical tigers, except that, perhaps uniquely among the big cats, they do not mind water.  Swamp Tigers prefer land, and are excellent tree climbers, but will swim short distances to reach prey or escape death.  All swamp tigers have a taste for human blood and prefer to hunt humans over any other prey.

The most dreaded of all trolls, the gigantic swamp troll inhabits the Great Western Swamp (which I will describe in detail in a future post).  The swamp troll lies in wait for prey, its leathery, muck-encrusted back sticking out of the water like a small island.  When something gets close enough, the troll rises to its full height of 16 feet, striking with terrible, 3-foot claws.  A swamp troll knows little fear, and will not hesitate to attack small boats and other swamp-going craft.  Swamp trolls are nomadic, going where the hunting is good.  They are excellent swimmers, and if forced to flee will dive into the swamp-water and swim away from danger.  Swamp trolls are amphibious and can hold their breath underwater for very long periods.  Swamp trolls have all the same regenerative abilities, and susceptibilities to acid and fire, as other trolls do (see Labyrinth Lord p. 100).

* 2% chance of encountering the apparition of Awra (see forthcoming post); in all other cases, it is a typical magic-user (level 1-6, rolled randomly) fleeing from Noffellian authorities.

** This can be any type of monster or NPC that the guide or barge captain has wronged / made enemies with in the past.  The creature will attack the guide as well as the party indiscriminately.