Skype Will Keep Us Together

As I have previously reported, my Labyrinth Lord group is now gaming via Skype.  Four of our players are still on the West Coast (where the campaign began last January), one player is in the midwest, and I, the Labyrinth Lord, am now in northwestern New York state.  Skype is our friend! 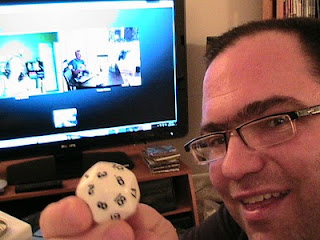 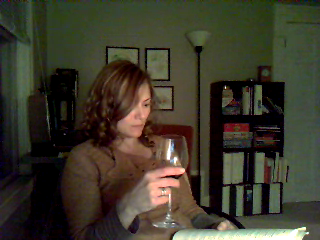 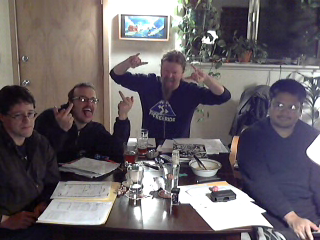 . . . and the rest of the gang in Oregon!
We use the three-way video conferencing function, which is currently available on a free-trial basis.  The rumor is that Skype will start charging for this particular service in the future, though given how reasonable Skype's rates are for calling landlines etc., I don't anticipate that the expense to our group will be very substantive when / if they do start charging.

I have also used Skype on a couple of occasions to participate in Carl's Mutant Future campaign, also taking place on the West Coast.  Recent schedule changes have made this difficult -- they are starting sessions later, so late that it is too late for me to be awake on East Coast time -- but in theory, I could still be gaming with that group as well, thanks to Skype and a couple of well-placed webcams.

In some ways, I am surprised more RPG'ers don't use Skype in this fashion, especially when I hear folks bemoaning their difficulties in finding other gamers to play with locally and regionally.  Skype eradicates the geographical barrier!  Maybe some gamers simply resist this option because it feels too "weird" or their internet connections are not speedy enough to make Skype video conferencing feasable.  It might also be difficult for those that rely on miniatures and battle maps -- I have no truck with that stuff, our combats are all processed verbally, so no hassles there for us.

Is anybody else out there doing stuff like this?