The Lands of Ara Compendium 2011, described here as "collected highlights of the gaming content from the Lands of Ara blog from its inception in 2009 until the end of 2011, to be released as a free, downloadable pdf in the first weeks of 2012," is slowly starting to come together.

In that same post I mentioned that killer OSR artist Kelvin Green was working on new illos for the Compendium, and indeed he has recently delivered these! So here is a teaser of what is to come, in the form of Kelvin's awesome depiction of an Undead Yeti: 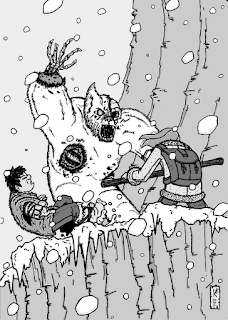 And speaking of killer OSR artists, we have commissioned the Compendium's front cover illustration from Johnathan Bingham. As Johnathan recently wrote, he is well into the initial sketching phase already, and once he has worked his magic, his wife Daisey will be colorizing the cover image for us! No preview yet, but I can tell you I'm very excited about this piece, as well as a number of other GREAT Kelvin Green pics I am keeping secret until the release of the Compendium.