Session 46: Raiders of the Underwater Temple

The party was still monkeying around with the same elevator they discovered last session. Having just killed two big Ponaturi in a tunnel on what I'll call the "Briny Level," the group decided to attempt to ride the elevator even further down into the bowels of the earth. An appropriate place for scum of their sort, in my view.

At any rate, leaving Hazel's follower Fuzz up on the Thoopshib Temple level to work the levers, Vivuli issued him instructions via his monkey familiar, also left upstairs. One lever pull later, the elevator rumbled, and down they went, 800' feet farther below the Briny Level, to a place where they beheld a strange sight indeed.

The elevator exit opened west onto what appeared to be an underwater scene. The ever-bold Dak stuck his arm through the exit-way, feeling a slight tingle as his hand passed through a transparent force-field into rather cold (salt) water. Though it was very dark, the PCs determined that they were looking out at a sea floor about 50' below the level of the elevator floor. The eerie underwater scene was dimly illuminated by some distant light source to the west.

All the party members quaffed water breathing potions. Dak drove a spike into the elevator room floor, tied a rope to it, and the party tethered themselves to this rope in the following marching order: Dak - Yor - Hazel - Innominus - Uncle Junkal. All these (plus Vivuli) set off through the portal, marching along the sea floor toward the light source; Vivuli, untethered, swam a few feet above the column of his comrades as they made their way westward.

The party had a total of 550' of rope, which got them to within about 150' of the light source when they ran out of tether. The pale green light emanated from a huge, glowing, egg-shaped object sticking up out of the sea floor ahead. Vivuli swam ahead alone to scope out the structure more closely, and was able to see that, in the east face of the natural-seeming stone "pedestal" (really an outcropping of the sea floor itself) that cradled the glowing "Egg," there was inset an arched entranceway, 20' across and 30' high. Pitch darkness lurked within the archway; that darkness had a sickly green tint to it.

Vivuli swam back to his rope-bound comrades and, on the basis of his reportage, the group decided to go back upstairs to the Prince's Manor (to rest, recuperate magical abilities, etc.) before returning the next day to explore this weird underwater structure. In particular, Innominus wanted to regain his Locate Object spell, so as to track the location of the coin he placed in the Thoopshib Temple slot a few sessions ago.

Back upstairs in the Manor house, the party learned that the recently recovered Prince Arkus planned to hasten to Farn Junction with cadre of priests in order to save as many citizens of the plague-ridden town as possible. He was taking a regiment of his soldiers north within the next day or so, and was having Grand Vizier Krock and Father Azamondius write letters to numerous Minochian and Kaladarian Holy Orders calling for priests capable of curing disease to meet them just outside Farn Junction. Innominus offered some advice to the Prince on how to proceed with Operation Rescue Farn Junction, but the party felt that their own work was here at the Country Manor, routing out the demonic threat that still dwelt somewhere in its bowels.

Vivuli cast invisibility on the two dwarves that night, and all rested.

On the morning of Day 165 of the party's Arandish adventures, as Prince Arkus readied his men for the rescue operation to the north, the party rode the underground elevator back to the underwater level, quaffed more water breathing potions, and headed back across the sea floor toward the eerie Egg. Innominus cast Locate Object, and indeed that coin of his seemed to be located somewhere within the glowing, Egg-like structure. 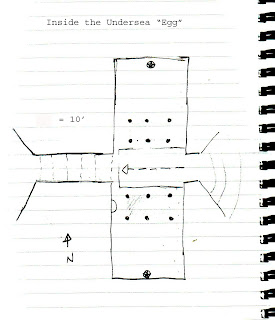 They went through the archway and inside, finding themselves in a large (40' x 160' with 30' ceilings), dark, pillared chamber (see map above). They moved slowly into the place (dashed arrow) in their previously established marching order, only with Vivuli in front this time.

Innominus detected for magic and evil, finding that the twelve pillars in the place radiated literally the strongest magic he'd ever seen, and that the entire place radiated very strong evil. He also cast detect traps, which didn't reveal much.

As they walked westward, the group noticed two other sinister features of the area:

- the spaces between the two columns of pillars to their right and left were TOTALLY black, as if some kind of Void occupied that space (see shaded regions on map), and

- there were two 18' tall statues in the place, one at the extreme north end of the room, one at the south. The northern statue depicted a huge lobster-like creature, with LOTS of eyes on numerous eyestalks, plus two great eyeballs clasped, one each, in its pair of huge pincers. The southern statue looked like this:

Reaching the west side of the rectangular room, the group found Innominus' coin: it rested inside a basin set into the west wall of the south section of the chamber. This basin, seemingly made of platinum, was an offerings plate of some kind, with 385gp in it, along with seven huge (10" diameter) pearls.

The party immediately discussed how they might successfully loot the pearls, and Hazel suggested using the old bait-and-switch move like Indiana Jones did in the opening sequence of Raiders of the Lost Ark: find some valueless object of roughly equal weight and swap it out (quickly!) for the pearls in the basin. 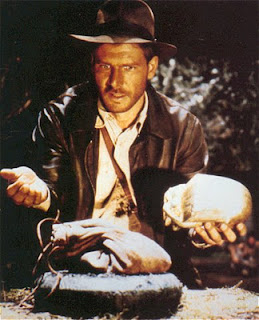 Dak went outside to the sea floor and located a suitably sized boulder while Innominus and Hazel readied defensive spells. The dwarf brought the boulder in, and in a carefully timed effort, he rolled it onto the offerings pedestal as Vivuli pilfered the pearls, the gold coins, and the platinum tray itself! The two thieves were tethered to a rope, which their comrades Uncle Junkal, Fuzz, and Gorgo immediately hauled upon, bringing the looters and their loot back outside the glowing Egg structure.

Innominus then prudently cast Wall of Law inside the chamber, surrounding the central 20' walkway (see line on map) and utterly covering their retreat. That spell:

"Shines as a bright light that will hold all intelligent undead at bay. In addition to taking 1d8 points of damage, any Neutral or Chaotic creatures passing through this barrier must make a save versus Spells and Spell-like Devices at -1 or be calmed for one hour afterwards. Calmed creatures are -2 on all combat rolls during this hour."

Nothing came out of the Egg after them, though Innominus sensed Evil Undead spirits within, unable to pass the Wall of Law he had created.

The group then hastened back to the elevator and rode it to the highest level they knew of: the huge, sulfurous-smelling chamber located 200' above the Thoopshib Temple level they originally came from.

The PCs cursorily poked around in that vast chamber. Yor and Dak walked its perimeter, learning that its dimensions were 1000' (north to south) by 1400' (east to west), with 40' ceilings. Next the whole party* walked out 400' eastward toward the center of the room, and found some demonic etchings in the floor, inscribing a vast, 600' diameter circle. Uncle Junkal and Viv both instantly recognized this as some kind of demonic summoning circle.

And this is where the session ended.

--
*Technically minus Hazel, whose player had had to retire by this point in the evening.