Session 55: Deadly Encounters in the Snow

"[Minoch] is like the Afghanistan of the Lands of Ara."
--Innominus of Endra

The session started on the evening of Day 176 of the party's Arandish adventures; they were standing outside the smoking ruins of Kaminster's country manor house, in light snowfall. Prince Arkus offered Uncle Junkal the position of Vizier of South Minoch, to work with Yor, Baron of Rogaland, and to report to Abernathy the Scribe, the new Grand Vizier of Minoch. The rodian bard accepted. Then the Prince and his entourage bade the party farewell and set off to the north, heading for the Prince's ancestral home near Farn Junction.

The PCs and their entourage headed into Fortinbras and visited the Baron's Residence, which now belonged to Yor. They met the houseman, Thomas, who showed them around the heavily fortified mini-keep. It consisted of two main residential buildings --  a Great Hall and the Baron's House -- plus stables and a small guard house near the front (north) gate. The whole place was surrounded by high stone walls, and the Baron's House contained four bedrooms.

Vivuli began x-raying the whole place, looking for secrets (he found none), while Dak, Innominus, and Uncle Junkal moved the group's possessions -- and their personal hired house staff of twelve dwarves and one Mizarian stable hand -- from their rental house on the west side of town to the Baron's Residence. Meanwhile, Yor, Baron of Rogaland, took his first official midnight meeting, with Undersheriff Xavier.

Xavier reported that ever since yesterday's earthquake, there had been steady reports of demons flying around and attacking travelers in the mountains west of Fortinbras. The undersheriff told the new baron that the mountain village of Wellspring had not yet been attacked or threatened, but that this was a strong possibility. Yor instructed the undersheriff to evacuate the area where the demons had been seen, under the pretense of "forest fire prevention." He also dispatched a messenger to Farn Junction to inform Prince Arkus of this new demonic threat, and assured the undersheriff that he and his adventurous companions would soon head into the mountains to investigate.

Then Yor and the rest of the party bedded down for the night in their new, heavily fortified digs.

The morning of Day 177 saw heavy snowfall in Fortinbras. Innominus rose early, and after paying obeisance to Holy Endra, the cleric went about attempting to remove a curse (to no effect) from the petrified man the party removed from Stonehell, then successfully removing a curse from the Skullface hobgoblin general's sword. Meanwhile, Dak instructed (and paid) his team of dwarven excavators to dig and construct an underground chamber beneath the Baron's residence, and to excavate a tunnel connecting that building to the Great Hall/guest house, the stables, and a point just outside the Baron's Residence's outer walls. At Viv's suggestion, the PCs also ordered another construction team to build an outdoor gazebo on the Baron's property, in order to cover the noise of the secret, underground construction work.

The party spent the rest of Day 177 asking some questions of witnesses who had seen or encountered the demons marauding in the western mountains.

That evening, Viv took to the streets of Fortinbras, dressing as a rich tourist in an attempt to attract a pickpocketer. He eventually did so, and when the pickpocketer struck, Viv caught him and then recruited him as a follower. Rodrick the thief was now part of Vivuli's entourage.

Heavy snowfall greeted the party the morning of Day 178 as they saddled up to head into the demon-infested mountains. Six of Yor's Minochian archers accompanied the party. 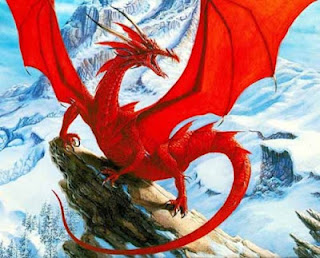 By dusk, they were most of the way to the Stonehell box canyon, wading through thick snow on the mountainside, when suddenly, out of the blinding snowfall, a red dragon assaulted them from the air. It blasted them with flame, but then the party slew it with projectile weapons over the course of a few rounds. It fell to the snowy earth with a tremendous thump.

Viv x-rayed the female red dragon's carcass and found that it had recently eaten some horses but had ingested no valuables or treasure. The party beheaded the dragon and kept the head. Then Dak dug a snow cave and the group encamped for the night. The snowfall lessened a bit as night fell.

In the middle of the night, on Yor's watch, the party was attacked by four ravenous hill giants, and in the bloody fracas, Innominus' longtime dwarven follower, Gorgo, was slain. Uncle Junkal's follower, Claude the Ranger, was almost killed but splintered his shield to save his own life. The session ended after this battle.