Reflections on the Lift Bridge Game and Younger Gamers

In the past I have briefly discussed what it was like to play with younger gamers -- fun! -- and subsequently confessed that despite my interest in playing with members of younger generations, my main mission in reaching out to them as a gamer is to introduce them to the Old Ways, i.e., Labyrinth Lord. Well, I am happy to report that via my Lift Bridge Old-School D&D Group, I am getting my opportunity to do just that.

However, with that mission comes certain responsibilities and special considerations. 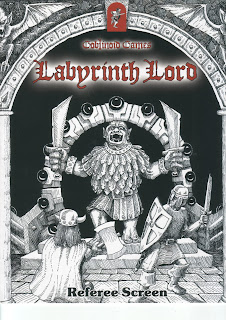 My LL Referee's Screen is seeing a lot of good use these days.

Young gamers are fun for me to referee because they really get into the role-playing and the "imagine the hell out of it" spirit that I like to see from players in my games. I always favor players who come up with inventive and entertaining solutions to problems -- like Rolland the cleric assaulting skeletons with his backpack to avoid using a bladed weapon -- rather than the power gamers who just want to "win" at all costs.

However, I faced a tricky situation two sessions ago that, in retrospect, I did not handle very well. Two younger gamers -- not even quite teenagers -- showed up for the public LL game at the bookstore with characters already generated. In fact, their characters were ones they had been campaigning with for some time in a 2e campaign. I was so excited to have them on board, especially given their familiarity (via 2e) with old-school-style play, that I permitted them to use their current characters without vetting said characters very rigorously. Sure, I scaled their PCs down a few experience levels to bring them closer to the party average of about Level 4, but I failed -- until too late -- to realize how many magical items and special abilities they had been granted in their "home" campaign. Not only did these two guys end up having characters who were WAY too overpowered for the party, but I continually had to haggle with them over what powers and items they could and could not use in my campaign. THIS WAS NOT THEIR FAULT -- it was mine. They brought in their PCs and I did not look them over closely enough; otherwise, I could have nipped this in the bud. But I didn't. And after the game, there was some chatter between the older players on the Old-School D&D Group's Facebook page that went a little like this:

PLAYER 1: Should there be an age limit to our group? I've got no prob's with ppl being comfy and having fun. I just feel if there's children in the groups we have to second guess most the game

PLAYER 2: I'm fine with whatever... it only becomes a problem for me when we have to hold back [our adult-themed talk] because of certain people being present who may find it inappropriate. That and when their characters outclass ours. Maybe they should create new characters that fit into our game

PLAYER 3: It's not fun to have to censor yourself. I will say though, I'm totally fine with getting 5k EXP this session.

PLAYER 4: The real tricky part is how do we enforce this now that two kids have joined and we never had any such rule in place before? Anyone know if they're planning on returning?

PLAYER 2: The kids said they wanted to come back but that lady [their mom] seemed hesitant I think.. if they do come back we could just make them create new characters within our game.

PLAYER 4: I was thinking of just not censoring ourselves in hope of turning them away with our matoor language but then I thought about what a monster I was at age 13. Won't work.

PLAYER 2: haha we should anyways

ME: That's the ticket!

The two young lads did not return for last weekend's session, though I would not be surprised if they come back sometime in the future. I welcome them but I am attuned to my other players' concerns, especially the power gaming issue. I absolutely plan to make those two re-roll fresh LL characters next time they show up.

As for the blue language issue, that is a quandary. Sure, it is a public game in any case, so I do try to somewhat limit how much I use terms like "the goblin violently sodomizes a corpse" and "you sever his testicles and they roll across the floor, trailing semen" in any case. But gamers will be gamers, and since the majority of the group is in its 20s or older, it may be difficult for us to censor ourselves down to a PG-13 level. We may be able to hit a "soft" R rather than a "hard" R, but that's the most I can hope for I think, at least with this particular crowd. But I know I have a responsibility to set the tone and make all feel welcome.

To our credit, we had a different youngster named Alex show up to the most recent game, and he was a big contributor -- his fighter, Joe, was a heavy hitter in melee and was instrumental in bringing down those skeletal spidergoats -- and I think we were able to say some of our raunchy stuff (I know I used the word "buttocks" a couple of times) without offending his young sensibilities. There is probably a balance to be struck here.