My Online LL Group is a Treasure 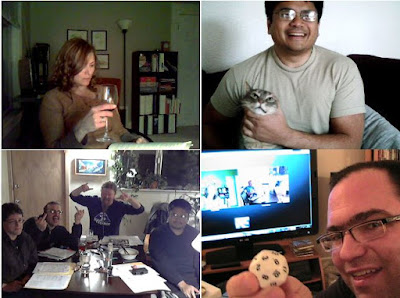 Members of my "home" Labyrinth Lord group in fall 2010.

I recently wrote about experiencing DM burnout and consequently placing both my Labryinth Lord groups on hiatus. In that post I noted that


gaming over the internet, for me, is a pale shadow of gaming live, in person, at a table. No matter how good the technology gets there is, for me, a disconnect or a missing piece that rears its head in various ways online: less spontaneous fun chatter and humor takes place, some details get missed or talked over or need to be repeated, to somewhat lessened effect. The whole thing feels like a giant, three-dimensional, full-sensory experience being strained through a small, thin, partial, two-dimensional medium.

In that same post I claimed that gaming over Skype has been a "disappointment" to me. That is indeed how I felt at the time. Yet my DM burnout was particularly intense then. I was feeling grumpy about the slow winding down of my local public game, which dwindled to two regular players late last year, then an unsustainable one this spring.

No, that earlier statement should be read more as venting than as analysis or plan. It reflected my emotional state and was not meant to condemn the concept of RPG'ing via Skype in general. Most importantly, it was never intended to impugn the members of my "home" gaming group or to devalue the wonderful gaming experiences I have shared with them in the years since this campaign began in 2010. 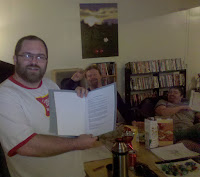 I am quite lucky to have such a wonderful group of gamers and if Skype is the means by which we must reach each other, so be it. We are lucky to be able to keep this thing going in such a relatively simple and straightforward way.

Our particular group is especially fortunate to include players with a wide array of real-world RPG'ing experience. We have one neophyte player, a couple three with some limited prior D&D experience, and three of us who have been playing RPGs (with varying degrees of consistency) since the 1980s.*

Furthermore, the members of this group are gaming associates and also friends. I went to graduate school with most of them, played in a band with another, have edited essay collections with one guy, co-authored scholarly articles with another, and am generally invested in all or their lives outside of RPG'ing.

Given that, it is remarkable and exciting that everybody in this unique assortment of folks is willing to make time to play Labyrinth Lord once every four to six weeks or so, despite being of adult age with families, busy careers, etc.

Most importantly, we all generally get along, in-game and out. There is a supportive, light-hearted, laughter-inducing atmosphere during our sessions. This harmonious vibe shines through, for example, in Yor's player's supportive, appreciative comment on my last session report post: "Thanks for putting these together Carter." It is, of course, my pleasure.

I still have a few minor qualms with the gaming-via-Skype format, but those aren't likely to disappear, barring major, Star Trekkian advances in technology. Probably not even then. Live at the table will always be best. But I have a good thing going here. Maybe I can re-tap into some of the feelings I had earlier on, when I wrote this celebratory post about keeping our campaign group together over Skype: "Skype is our friend!"

In any case, my "home" Labyrinth Lord group is something very special that I will be sure to nurture, appreciate, and treasure. Thanks friends! 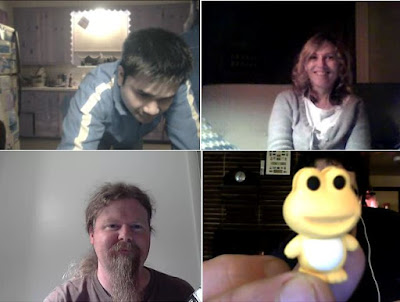 --
* One of our experienced participants is Carl Nash, who introduced me to the OSR via Mutant Future and who is still quite active in the OSR blogosphere. Check out Carl's blog and be sure to purchase his amazing adventure locale, The Fungus Forest, available for "pay what you want" here on RPGNow.