Beastarr the Bobcat: The Coolest Familiar in Ara

The Spawn of Endra lays down this profile of Innominus's familiar for quick reference:

As the avid readers of this blog know, Innominus the Follower of Endra recently cast one of Mr. Bat's great spells from his Ancient Vaults and Eldritch Secrets blog, Conjure Familiar, while up on Greystone Mountain and thus Beastarr the Bobcat* joined the adventuring party as Innominus's familiar. It goes without saying that Beastarr is pretty cool, since he's a cat. Thanks to Bat's spell, Innominus can telepathically communicate with Beastarr, and see through his eyes for 100'. Carter has determined that even though a bobcat has better than human eyesight, he doesn't possess infravision per se. However, Beastarr has awesome sense of smell and can track over short distances if appropriate smell samples are provided (e.g., the hobgoblin general writes a note in his own feces saying "Fuck you , surface dwellers").

The other piece of awesomeness is that Innominus can cast "Animal Growth" on Beastarr, and he takes on Mountain Lion proportions for 2 hours (12 turns)! AAAAAGHHHH!!!! So COOoooollllllll!!!!1!1!1!!!!!  CLAW/CLAW/BITE Fools! It hurts!!

And for good measure:

And rest assured that a linear doubling in size equals a geometric increase in kicking ass.

It has been ruled that Beastarr can't die from reverting back to the bobcat form, so that the loss of the 10 HP from enlarged to normal at worst reduces him to 1HP.

______________
*Beastarr derives his name from the ever-charming I Hit it With My Axe alumna Bobbi Starr (image from Wikipedia).Yes, I'm in a box. I've already been told once, thanks. 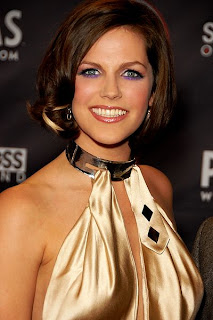