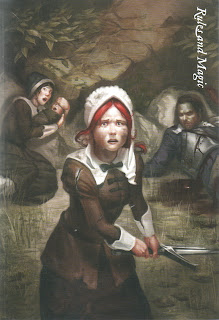 This post constitutes Part 2 of a three-part review of James Raggi's Lamentations of the Flame Princess Weird Fantasy Role-Playing Grindhouse Edition. Part 1 covered the game's Tutorial book; this portion will discuss the Rules and Magic volume. I will review the third and final volume, Referee, in the near future.*

If the Tutorial book was somewhat hit-and-miss in terms of addressing the veteran gamer well-versed in D&D's terminology and conventions, Rules and Magic gets right down to business. This is in fact one of the great strengths of Raggi's three-volume organizational scheme: all the introductory material is confined to the Tutorial, thereby allowing the Rules and Magic installment to run lean and mean. Immediately following the Table of Contents is a short chargen summary, instructions for rolling ability scores, a universal ability score modifier table, brief ability score descriptions, and character classes -- in other words, just what the veteran gamer would expect, very efficiently and clearly laid out. I am especially fond of Raggi's use of a single ability score modifier table -- it is indicative of the streamlined way Raggi presents all the rules herein.

In terms of character classes, most of Raggi's versions conform to "standard" D&D expectations, so I will only mention the two standouts: Fighters and Specialists. In LotFP WFRP, Fighters get a "to hit" bonus that exceeds that of all other classes, AND increases every time the Fighter levels up. This is such a simple and elegant "fix" to the common complaint that fighters gain less power at higher levels than, say, the spellcasting classes, that I wish the writers of 2nd Edition AD&D had thought of it instead of heading down the "weapon proficiencies" road instead. Maybe that would have kept later editions from degenerating into the whole "feats" mess. But I digress.

LotFP Grindhouse Edition provides further balm to the wounded soul of a skill-system hater by finally building one that feels simple enough (10 skills only!) and old-school enough (it uses d6s!) not to rankle a curmudgeonly old grognard like myself. The system is based on a "x in 6 chance" mechanic -- my favorite!** -- and exists in a kind of "default mode" for all PCs. That is, all PCs use the "x in 6 chance" rule for many common adventuring actions, such as climbing, searching, sleight of hand, and bushcraft (foraging for food etc.). But the Specialist, LotFP's substitute for the D&D Thief class, gets extra "points" with which to improve his or her chances to perform some of these skills; a specialist is simply "better at certain activities that all characters are able to do at a basic level" (p. 10). This "diffuse" skill mechanic (available to all PCs but enhanced for Specialists) avoids the stupidity of thief-only d% skill tables and is so elegantly common-sensical that this feature alone provides a huge lure for me to want to play this game. Well done Raggi!

In another example of Raggi's commitment to efficient information design, the table accompanying each class description provides not only level advancement and hit die data, but saving throws as well. What a revelation! This makes so much more sense, and would be far easier to track down during game play, than the "usual" practice of locating saving throw tables in some separate section of the rulebook. This is not meant as a slam against other game designers who have opted for that more traditional mode, but I admit I am really fond of Raggi's choice to list saving throws with the class descriptions, on the same table as the other level advancement numbers.

I have noted elsewhere how amenable I am to Raggi's "cosmic" take on the threefold alignment system, and won't repeat that assessment here.

Others have praised LotFP's encumbrance system, and it looks great to me as well. But I am a pretty damn laissez-faire tracker of encumbrance, and so may not be the ideal reviewer to comment on that subsystem in much depth. Instead, let me praise the "Adventuring: The Rules of the Game" (pp. 30-37) section of the rulebook more generally. As Jeff Rients has written:

LotFP shines as pretty much the tightest version of D&D I've ever seen. This virtue comes across most clearly in the section devoted to what I call "operations", i.e. how to open a door or check for traps or crap like that. Most reviews of most D&D descendants (and many whole games!) completely skip this stuff because it's usually boring to read, but in actual dungeoneering play these mechanics are crucial. LotFP delivers the best, most coherent set of operations rules I've ever seen.

Agreed! Highlights for me include the game's foraging and hunting rules (based upon the Bushcraft skill), its precise description of what constitutes "defeating an enemy" (and what doesn't), and its breakdown of mapping procedures. However, one rules choice described in this section puzzles me a little: a character is merely unconscious at 0 hp and does not die until reaching -4 hp. Why? I know Raggi is not the first game designer or DM to proffer such a system, but I guess this is an area where I simply prefer that hp 0 = death.

"Maritime Adventures" in Grindhouse follow similar rules to Labyrinth Lord, but with more boats listed on the table.

"Property and Finance" is an interesting section, very helpful for games with PCs approaching Name Level.  I may well borrow some of these concepts, like "Investments" and "Taxes," for my own Domain-Level Labyrinth Lord game.  We'll see.

"Encounters" unfolds generally as one would expect it to, but with some nice enhancements not found in other games, such as rules for "Firing into Melee" (p. 59) and "Pursuit" (p. 61) which strike me as convenient, if not 100% necessary, at least not for me.  These are the kinds of things I enjoy ruling on in the moment of game play; but it is thoughtful of Raggi to include guidelines for them, especially for newer referees.

As for "Spells," this review is getting too lengthy as it is, and I am not feeling inclined to go through the spell lists exhaustively at this point.  I know that Raise Dead and Resurrection don't exist in Grindhouse, and that Raggi has added many custom spells to the standard D&D roster.  Maybe I will post separately on this, maybe not.

Similarly, I don't want to spend tons of time reviewing the Rules and Magic artwork, but I do want to reiterate my contention from the Tutorial book review that the layout and quality of the art throughout this game are absolutely top-notch. As usual, Raggi is setting a very high standard here, and there is really nothing I can say by way of complaint or critique. And since I am an amoral anarchist who does not believe in abstract "community standards" concerning such matters, I have nothing to contribute to the discussion of the artwork's content or subject matter, except possibly: it rocks! The art throughout vividly evokes the world Raggi wants us to see when playing this game, which is precisely what RPG rulebook art should do. 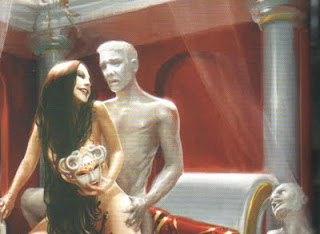 All that said, let me single out a few of my favorite pieces from Rules and Magic: its cover (by Jason Rainville, see top of post), the badass female specialist pic on pp. 12-13 (by Amos Orion Sterns), the remarkable Dean Clayton piece on p. 89 (check out the shading!), and the GREAT medusa illo on p. 70 (by Cynthia Sheppard, see cropped sample above) -- this last being a standout favorite of mine from the whole Grindhouse trilogy of volumes.

To conclude, I would echo James Maliszewski's recommendation that James Raggi "sell the Rules and Magic book separately from the [Grindhouse] boxed set" since "Rules and Magic [has] been combined into a single 168-page volume that contains everything a player would need to play the game." Agreed! I was fortunate enough to be one of the first 100 orderers of Grindhouse and as part of that deal, I got a spare copy of Rules and Magic thrown into my order. I am immensely thankful for this, since that is indeed the book GMs and players would want to refer to most during game play.  So let me say that again, just in case James Raggi is reading this review: PLEASE RELEASE THE GRINDHOUSE RULES AND MAGIC BOOK AS A STAND-ALONE PRINT PRODUCT.  There surely must be a market for that, yes?  For folks who want to play the game and own a print copy but don't wish to throw down the big bucks for the complete box?  Or would this violate Raggi's conception of the game as a three-volume entirety?

[UPDATE: As JDJarvis notes below, the stand-alone Rules and Magic book is available as a free, no-art pdf downloadable here.]

--
* As I mentioned in the first part of my review, I am really taking my time reading these books. Raggi clearly put a great deal of effort into creating, laying out, and publishing this game, and as a bibliophile I cannot resist taking my sweet time looking through it and savoring what I find there. So don't be too surprised if a few weeks pass before you see the final installment of my review.
** Regular readers will know that I favor d6-based skill mechanics for Thieves and Bards in my current Lands of Ara campaign.