The Tower of Death Lives!

Sometimes working on an exciting project gets me enthused about other, related projects as well.  I suppose a kind of synergy develops; the thrill of the first project spills over a bit and fuels my productivity toward the second.

Spawn of Endra and I have been making great headway lately on the Lands of Ara Compendium 2011, due out as a free pdf in a couple of weeks.  The compiling, revising, and copy editing of the material for the Compendium has gotten me re-jazzed about The Tower of Death, my OSRCon-inspired adventure module project.  This past week or so I have taken three key steps toward developing that module for eventual release:

1.  I emailed Spawn to see if he would be interested in doing the module's cartography.  He said yes!

2.  I emailed Johnathan Bingham some ideas about the module's cover illustration, and he agreed to take the job, which will likely evolve as another full-color collaboration sketched by Johnathan and colored by his wife Daisey. Hurrah! 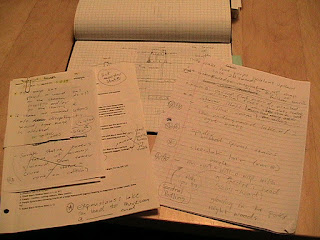 A glimpse of my OSRCon notes for The Tower of Death, plus some new ideas on the right-hand sheet.

3.  With these great talents onboard, I felt morally obligated (and genuinely inspired) to dig out all my handwritten notes and drawings and scribbles and half-formed ideas from OSRCon, and to begin typing them up.  I got on a roll: over the course of this week, the text for The Tower of Death has gone from a scattering of mostly handwritten notes scrawled on maps and a few bullet-pointish descriptions to nearly eight pages of typewritten material broadly organized as a module.  I have even made some expansions and revisions along the way, streamlining certain parts of the module and elaborating certain other areas that were only very vaguely sketched for OSRCon play.

Compendium first, I know!  Nevertheless, it has been fun to let another Lands of Ara Enterprises project take me over this week, especially since I couldn't pester Spawn too much over Compendium matters as he is completing final revisions on his doctoral dissertation.