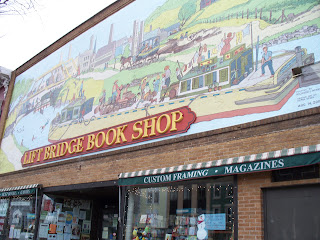 As I have previously reported, I am currently running an ongoing Labyrinth Lord game at Lift Bridge Books in downtown Brockport. The open-to-the-public group is really gaining momentum, with four or five regular players at this point. Yesterday's game saw record attendance -- seven players plus myself! -- including two new players who hadn't attended before. Word seems to be getting around.

Given how lazy I have been at keeping up with play reports in general,* it should come as no surprise that I haven't reported the details of that group's adventures. However, Cid, one of the regular players, has done a fine job of chronicling the first three Lift Bridge sessions here, here and here. Thanks Cid!

However, since (real-life bard) Cid has missed the past two Lost City Campaign sessions due to work obligations, allow me to briefly bring you up to date on the party's latest exploits:

7/29 Session
After the encounter with the "corpse-eating ghouls" in the dwarven graveyard between Lupner and Darkoul mentioned by Don Ximen, the group traveled further westward, stopping at the small outpost of Blart for the "night." As they rested, the outpost was attacked by a raiding party of several large fish-men, a regional menace whose lair was known to lie along the northern road leading away from an intersection of four significant underground roadways known to locals as "the Crossroads." After helping the Blartians fight off the fish-men raiders, and looting the bodies, the party set off the next day for "the Crossroads," only a mile away. The group was now within about twelve miles of the sizeable underground dwarven city of Khaz Dargur, yet chose to turn immediately southward, toward the rumored demesne of Zappo the Obscure, a local wizard of some renown.

"Our arcanist, Crimnox, sought to take a diversion from our trog-hunting endeavors in order to find allies amongst the wizards of the deep." -- Don Ximen Fernandez de la Vega

The party made its way southward for several miles, and soon came to where the tunnel opened up into a VAST underground cavern, through which their road progressed along a 12' wide, raised ridge sticking up out of the darkness. They tightened their formation and tied themselves together with long ropes -- all except Jarl the dwarf, who took point and remained unsecured.

They had progressed about a half-mile along the narrow ridge when they were attacked from above by three huge pteranodons! The party made fairly quick work of dispatching these foes. . .

8/5 Session
. . . only to be beset moments later by several amber golems, who moved with uncanny silence and were far harder to destroy than the pteranodons.** But prevail the party did, and then traveled another few miles along the ridge until the road entered an enclosed tunnel enveloped in an arcane darkness their torches and infravision could barely penetrate. Some arcane-looking runes were etched outside the tunnel mouth; Crimnox the Sorcerer was able to read them: You have reached the realm of Zappo. Do not enter here lightly. Of course, the party entered, Jarl, as always, in the lead.

After sneaking around a bit and scouting a couple of different empty chambers, the group made their way south then west into Zappo's cave complex proper, only to be viciously attacked by some skeletal spidergoats at a four-way intersection. This battle raged for some time, and came with great cost: Rolland the fighter was killed during the battle, then reincarnated (via a scroll Crimnox pinched from the dead fish-men in Blart) as a fourth-level cleric!

9/16 Session
The four undead spidergoat skeletons were eventually defeated, in an exciting ongoing melee that included recently reincarnated cleric Rolland doing everything in his power -- attacking with a flaming 10' pole, a lasso, and even a backpack! -- to avoid using his two-handed sword, his former (bladed) weapon. After dispatching the abominations, the group proceeded west then north then west again, into another stretch of passage cloaked in spooky arcane darkness. Entering the dark patch, most of the party (except Jarl and Rolland) fell instantly unconscious, and had to be dragged into the next chamber by their two awake fellows.

That next chamber contained a statue of a wizard, holding a wand aloft. Jarl and Rolland made offerings of gold and psychedelic mushrooms to the statue, and the statue's wand tip glowed and then the statue receded to reveal a downbound spiral staircase hidden underneath. Jarl dragged his companions down these stairs, then he and Rolland waited twenty more minutes for the others to wake up. All awake, they opened a well-polished wooden door with brass fittings at the foot of the staircase and proceeded into the chamber beyond . . . 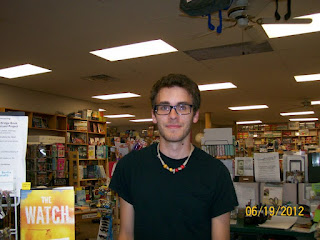 An expert Lift Bridge Books staffer -- also the player of Bobandy the Dwarf.

I want to take the time to thank Lift Bridge Books (especially co-owners Pat and Archie Kutz and store manager Joe Hoffman) for hosting the D&D group and getting the word out really effectively. One of my new players at yesterday's session said his dad saw an announcement of the Lift Bridge Old-School D&D Group in the paper. Way to work the publicity machine!

--
* I am still behind by about five session reports for my "home" Labyrinth Lord group.
** We had some new players that session who helped me, through no real fault of their own, to unbalance the party a bit too extremely, thus the amber golem battle was not quite as thrilling as it could have been; more to come on that issue in a separate, forthcoming post.