I picked up the new revised DUNGEON! board game the other day. Back in early 80s me and my sister and a bunch of neighborhood kids played it for hours when the Fresno summers made sitting in air conditioned homes more fun than running around outside. I figured maybe this would be a cool Xmas present for my niece and nephew, but I wanted to make sure WotC hadn't altered it so much as to irk me so I checked it out first. This is the only WotC purchase I've made aside from a pack of Magic cards I bought back in 1994. Not that I hate them, I just didn't buy their stuff.  And I assumed whatever cosmetic changes they made, I'd be able to see past them and have a good time. After laying out the board with its sort-of-isometric perspective, the whole thing started to shift around like a big old Necker illusion and now I can't see it right anymore. I'm serious.

All of the passages look like narrow bridges of blocks above a blue-black pool, and the rooms all look like Jell-O shots whose contents are subject to oblique gravity. Some doors look like they're in the side of the block pathway I'm walking on top of, and others seem to go directly into a floating Jell-O shot. 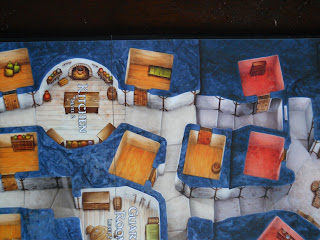 This is admittedly worse towards the edges of the board than the center, but my brain doesn't really sort that out. The oddest chamber is The Hole, which looks like a cylindrical ring with a bottomless pit ... going down at a 45 degree angle ... that's not the most bottomless thing I can imagine, but of course I'm not feeling the oblique gravity vectors 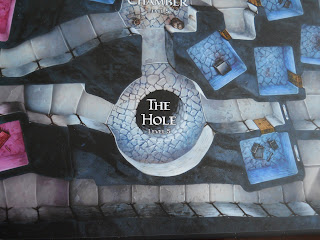 The least awkward section is in Level 5. Here it mostly looks like a set of chambers and passages sunk into a blue-black surface. 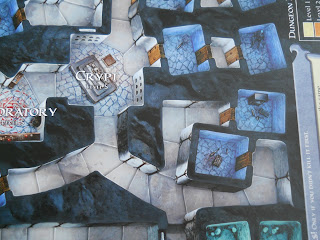 The overall effect when you look at the whole board is that the elevated walkway surfaces appear to be curving up at the edges, as if the blocks are stuck to the inside of a large bowl. Weird. I'm ambivalent about this art design. It's technically executed well, with neat details, etc, but there's something wrong with all the drop-shadow effects and the visually conflicting textures.

To the game itself, for now I'll just point out that they changed around the characters -- Heros -- you can be. Now it's Rogue, Cleric, Fighter and Magic-user (Elf). Elf is in parentheses because that's how it is in the rules, and their little markers below look like elves. The Rogue and Fighter are more or less self-explanatory, but the Cleric? Described as "Holy Warriors", they can't use spells but can use magic swords. Not very Clericky. They are in the photo below in blue, take a look at them. 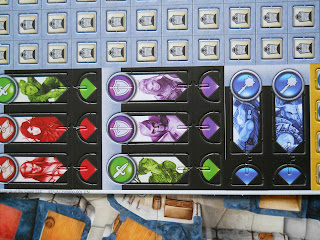 Tell me those two aren't dwarves. Yeah, no beard on the female, but compare her to the other characters. They're dwarves. Why not have dwarves instead of clerics since there's no clericness to be had in the game?

Dumb. But whatever, I can just call them dwarves if I want. I'm a grown up. Not sure if I'll buy another copy for my niece and nephew yet, but I'll keep you posted.