At the end of last year's OSRCon, I wrote a post about a specific photo that really summed up for me all the wonder, adventure, and camaraderie I felt during my first OSRCon experience. I would like to continue the tradition by sharing my single favorite photo from this year's Con and telling you the story behind why I love it so. 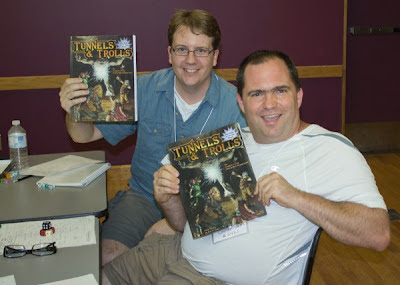 For one, look at the smiles on those two guys' faces. They are having a great time. The guy on the left is named Chris and the guy on the right is me. The shot was taken right at the end of the last session of the Con, mere minutes before we would all disperse and say farewell for another year. Chris and I are sitting at Ken St. Andre's game table, having just played a rollickingly good session of Tunnels and Trolls with the Trollgod himself, and are proudly displaying our T&T 5.5 rulebooks for the camera. Minutes after this photo was snapped, I would ask Ken to sign my copy. He did. 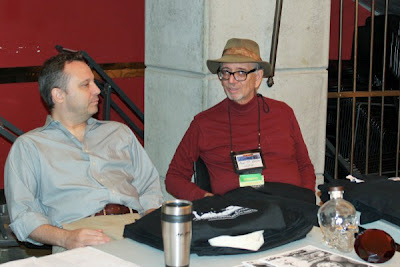 So that's number two: I met Ken St. Andre this year. In addition to playing two different T&T sessions with him, I also got to hang around with him after the Con activities were through -- in fact, we breakfasted together the morning after this shot was taken, and then Spawn and I had the pleasure of driving him back to the airport on our way out of town. Ken is a witty, warm, interesting man and it was a true delight to get to pal around with him for the weekend. Back when I started playing T&T in the early eighties, I would never have believed that now, thirty some-odd years later, I would be gaming and eating breakfast with the game's creator. My weekend with Ken at OSRCon 2012 will always stand as a major highlight of my entire RPG'ing career.

Thirdly and finally, while this photo at least partially captures these two lads' glee at playing T&T with the Trollgod, it does not fully explain why Chris and I were so enthused. You see, during the session, Chris played an orc who got involved in a shipboard rivalry with another orcish crew member on the riverboat we worked aboard. At one point, Chris decided to teach the other orc a lesson by "accidentally" shoving him overboard and drowning him, and he asked my character -- a human warrior named Hobart the Brave -- to back him up in case he got into trouble. (As I recall, the target of Chris's orc's vengeance had a big orc brother who swore to avenge any foul play visited upon his sibling.) While a bit dubious of Chris' character's motives, Hobart agreed to help his fellow party member, and, when the orc PC's attempt to knock his rival into the river failed -- Chris' character plunged into the water instead -- Hobart leaped into action, faking a stumble and knocking the NPC orc into the river to be killed by Chris' PC. It was awesome, if a little immoral; Chris and I conspired to do something "naughty," i.e., murder an NPC ally, and through teamwork (plus some insanely good die rolling on my part -- best of the session for me) we pulled it off. We laughed quite gleefully after the deed of vengeance was done. I think Ken thought we were bad people after that, but we sure as hell had a great time together.

And that, for me, is what OSRCon is all about: making new allies at the game table with whom to commit somewhat unnecessary acts of violent revenge. Who could ask for more? THANKS CHRIS AND THANKS KEN! 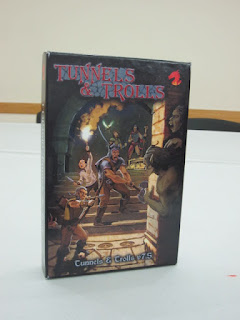