Humor in games has been on my mind lately, since Cyclopeatron mentioned it in a comment to this post, and James M. discussed it quasi-recently on Grognardia. Humor is also a core feature of Tunnels and Trolls, which I have been promoting of late. I suppose I have always been a firm proponent of humor in RPG's, largely for pragmatic reasons: I am clownish by nature, favoring comedy over other modes, so I find it constitutionally impossible to resist placing "funny stuff" into the campaign in certain areas.

For example, I love funny names for places (Bull-Licker Terrace, Snotream Harbor) and people (Ox-Head, Fish-Breath). Or, another: I want combat itself to be deadly and for real stakes to exist, yet my descriptions of foe deaths are usually excessive and pretty grotesque and/or scatological, e.g.:

"You slice open his stomach, and his last three half-digested meals spray out onto the floor. As he scrambles around on all fours, screaming in agony as he tries to gather up his spilled intestines, your final blow kills him and he falls to the floor. He flatulates horribly as he expires."

I think the core REASON I enjoy deploying humor into my campaigns is because I actually believe in fun. I want my game sessions to be fun. While I acknowledge the truth and beauty in the ideals set forth by James Raggi in his seminal essay "I Hate Fun," I guess at the end of the day, I am a somewhat lazy, low-genre type of guy and I want my cheap thrills and I want my fun. 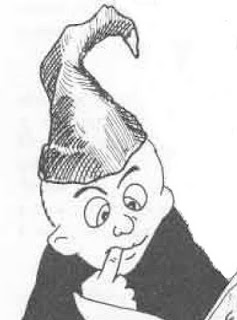 Mind you, I am aware that Raggi's post title is meant to be provocative, and that his real argument is not against fun per se but more against players who feel entitled to certain types of comfortable, predictable, non-deadly fun. I am largely in sympathy with Raggi's "anti-fun" position, and by claiming to like fun in my RPG's I am NOT disagreeing with a passage like this one:

"The clue phone is ringing, and it’s a collect call for these fun-seekers: YOU’RE NOT SUPPOSED TO LIKE IT. Goddamn, risk and challenge and failure are as much part of role-playing as prancing around like Errol Flynn… er, sorry, Legolas (sorry, wouldn’t want to make a reference that the average modern person wouldn’t know off the top of their head) or something. Shit out there is trying to KILL YOU and there are critters out there that will fuck you up but good if you’re unlucky or not careful.

"What part of, 'The giant spider bites you… oh, you blew your save… roll up a new character!' is supposed to be fun or heroic? Obviously the game was built on a different type of satisfaction."

This is well stated. I too believe in creating a dangerous campaign universe and letting the dice fall as they may and saying FUCK BALANCED ENCOUNTERS. But I also want there to be some levity and laughter and pure, unadulterated fun mixed into my experience at the gaming table. And I don't mean non-diegetic, out-of-game fun like non-gaming-related jokes and the like, which are okay but best kept to a minimum IMO. Rather, I mean IN-GAME-WORLD levity and funny names and comedic weirdness and silly fun. This is a FANTASY world I'm running here, people, and so it can be whatever my players and I wish it to be! In my case, that means a place that is to some extent Monty Pythonesque and silly.

I think most of my players enjoy this humorous style of mine but it may be that some just tolerate it long enough to get back to other more serious and/or exciting parts for them. Overall, my players and I co-create a wide array of gaming experiences at our sessions, including boring ones, and occasionally downright un-fun ones, but also epic ones, and harrowing ones, and brain-teasingly mysterious ones, etc. So it runs the gamut.

But at the end of the day, I am pro-fun.