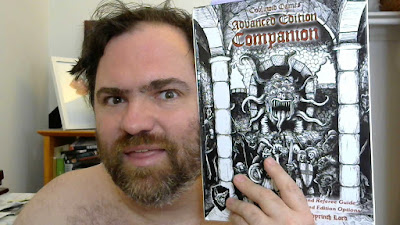 I have supposedly been running two simultaneous Labyrinth Lord campaigns for several years now. I say "supposedly" because my "home" game (played over Skype) has really been on hiatus for a year or more at this point -- the last two sessions (numbers 87 and 88) took place in June 2015 (on 6/8 and 6/15) and those came after a break lasting since September 2014. I love that group but I cite two factors that led to me losing steam and enforcing, mainly through inaction, a hiatus:

(1) I must admit that gaming over the internet, for me, is a pale shadow of gaming live, in person, at a table. No matter how good the technology gets there is, for me, a disconnect or a missing piece that rears its head in various ways online: less spontaneous fun chatter and humor takes place, some details get missed or talked over or need to be repeated, to somewhat lessened effect. The whole thing feels like a giant, three-dimensional, full-sensory experience being strained through a small, thin, partial, two-dimensional medium. It will do in a pinch but sadly I must report that online RPG'ing has ultimately been a disappointment to me. There are, of course, high points and much fun to be had, but also a lot of tiring pragmatics that drag the experience down for me.

(2) I am experiencing general DM burnout. As evidence of this, just this past weekend I also made official a hiatus for my public Labyrinth Lord game at Lift Bridge Book Shop. The group hadn't met for about a month anyway and "the group" in this case is really down to one guy. Or maybe almost two guys: one player who could show up on time, and another who came for the last hour of each session, unable to come earlier due to his work schedule. Then recently, even guy #1 started missing sessions due to the demands of a new job, so between my feelings of DM burnout and critically low attendance, it was time to give that campaign a rest, at least until summer but maybe indefinitely. 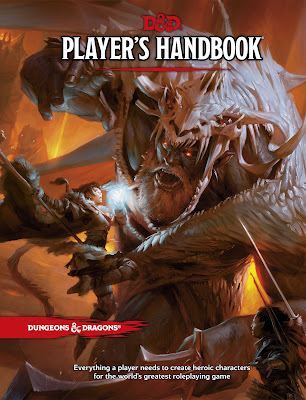 Meanwhile, somebody else I met through the bookstore -- who also happens to be a bookstore employee -- has started running an after-hours 5e game, which I have joined as a player. I am playing Ur, a dwarven barbarian, and having a grand old time fighting undead and the like. I think it is really crucial (at least for me) to take time to see both sides of the referee's screen. Playing in someone else's campaign is really freeing, fun, and rejuvenating. So thanks Christine for running such a great game!

That 5e game has been running a couple of months so far and last weekend we had our first session in which only two players showed up. Prior to that, we were averaging at least three players (in addition to the DM) each time. But never fear, the DM was ready -- she had prepared a short one-off scenario using the old TSR Marvel Super Heroes RPG -- the one that uses the brilliant FASERIP system. (If you love that game as much as I do, check out this site.) I had a great time playing -- who else?  -- Ben Grimm, while my comrade chose Spidey. So fun! It's clobberin' time! 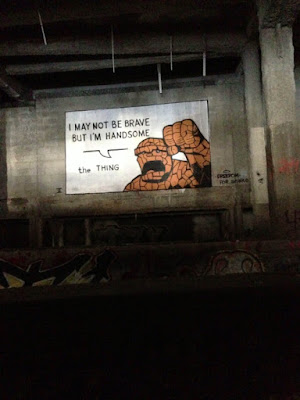