This post continues the work begun in this previous log, chronicling the ongoing exploits of my "home" campaign group. That group's PCs include:

As before, these updates will take a more brief "capsule" form -- feel free to ask for elaborations in the comments.

Starts late afternoon of Day 194 at the Arkus Residence in the Lookout Hill District of the Free City of Kaladar. Heavy snowfall. Most of the party rests and relaxes at the Minochian Prince's modest but well appointed town manor.
Morning of Day 195 -- extremely heavy snowfall.
Tonight at midnight a Grand Council of Wizards is scheduled at the White Council Guildhall, to discuss recent demonic incursions into Ara and Kaladar.
Uncle Junkal, accompanied by Innominus, visits his old campus, the Central Bard's College of Kaladar, and consults with on old grey haired rodian bard there. Asks about the cryptic note he got at the Orc's Balls Inn in Session 61, learns next to nothing. UJ also asks about Morag's Gates and possible folkloric locales for Morag's Workshop. His source says the workshop is either in the eastern mountains of the southern trollish territories, north of Gannar in Novellan, or possibly on the Komar Peninsula (though this last surmise could be the result of a mis-translation).
As for the chits and the gates, Ben the Librarian asks UJ and Innominus if they've seen a Gate or used a chit in one, and Innominus tells him they buried a Gate under Kaminster's Manor in Rogaland, South Minoch. Upon further questioning, during which the Endran priest mentions encountering a "lobster woman," Ben tells of ancient battles between her slimy legions and Fort Hragdor -- maybe Kaladar Island is a holy place for Blibdoolpoolp?
Viv seeks an assassins' guild to join, hopes to be tapped to join The Red Hand. He instead meets some representatives of the Kaladarian Murder-Heads.
Day 195 at midnight: Grand Wizards' Council, Zardoz presides.* Opens by mentioning the 800-year ban on wizards getting involved in Arandish political or military affairs. Dak and Innominus insist that the whole continent is being undermined by demons and balrogs. They state that they have both seen pits to hell appear in Fortinbras and Farn Junction. They outline a plan in which the Kaladarian White Council wizards will assist in finding and sealing the hellpits.

In the wee morning hours of Day 196, Viv gets a mission from the Kaladarian Murder-Heads at the Three Fingers Inn. By the end of the night, he succeeds at his mission and is awarded a Murder-Heads medallion from Franco, his contact in the guild.
Dawn of Day 196 -- more heavy snowfall. Once Yor takes residence, the House of Arkus stands as a kind of informal Minochian Consulate in Kaladar.
Around midday on Day 196, Claude the Ranger comes back to Kaladar from a scouting trip and tells Yor that he saw balrog forces amassing near Farn Junction.
That afternoon, a Kaladarian Special Council is held at the headquarters of the Lady Mayor.** Yor speaks on behalf of the Prince of Minoch, telling the council that "the nature of this [balrog] attack requires magic to respond." The Free City of Kaladar, Delzar, Rogaland, and the White Council of Kaladar mutually endorse a Resolution to End the Hellpits.
Dak asks for and gets a special appointment to the Kaladarian Guard, "Field Marshal in Charge of Hellpit Closure," reporting directly to General Izod. Dak takes military command of a special demon-fighting unit, to be trained in Kaladar starting immediately. He requests and is granted New Steel weapons and fire resistance potions for all his personnel.
The evening of Day 196, Yor visits local pubs including the Green Dragon Inn to recruit dwarves for Dak's anti-demon task force.
After consulting over dinner with General Izod, Dak orders Noffellian troops to Fortinbras. Innominus sends out a call for any priests with demon-fighting abilities or experience to converge on Kaladar.
Day 197-198 -- Dak makes preparations, UJ asks Alara at the Bard College about cat creatures that live in the east, and she confirms their existence. Innominus asks around about demon-hunters, finds out the Church of Achelon is a good bet and that there's also a guy names Father Wickley of the Church of Telengard known for such skills.
Day 199 -- tryouts begin for Dak's anti-demon squadron . . . and four green dragons attack! 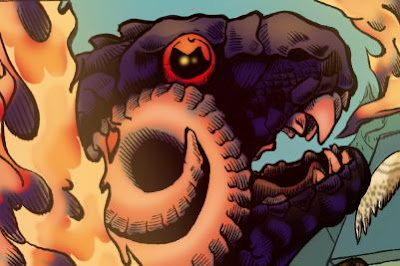 Midday of Day 199, very light to no snowfall.
The party just survived an extremely rare green dragon attack within Kaladar's city walls. (Green dragons are known to inhabit the woods to the north and east of the Free City and many Kaladarian landmarks are named for the creatures.) Then, all of a sudden, Innominus, Hazel, and Yor hear distant screams and explosions from the west and Hazel sends her kestrel aloft to seek out the disturbance. The kestrel sees balrogs flying round the West Gate of Kaladar, attacking the Royal Guards posted there by dropping fire gems and whipping them.***
Four saurian balrogs swoop over the city and attack Dak, Dak's task force inductees, Uncle Junkal, Viv, and Hazel. The PC team kicks their asses and heads for the West Gate. They converge there with Yor and Innominus. The party helps the Kaladarian Royal Guard fend off a vile balrog assault on the Free City of Kaladar. Collectively, counting the ones vanquished at the recruitment training field, they kill eleven balrogs. One balrog flees.

Day 199, just before midday. Heavy snowfall. The West Gate of the Free City of Kaladar. Kaladarian Royal Guard troops line the rooftops and Outer Wall. The PCs loot 7 balrog corpses, recover a total of 6 fire gems. They also find one of Morag's Keys, a bone-like chit etched with an image of a lobster-headed and -clawed woman.
Beastarr the Bobcat sniffs out whence the sole retreating balrog fled, leading the PCs to a place just inside the Free City's fortified Outer Wall. Innominus detects residual magic traces in the air and along the interior of the wall. Beastarr smells a pungent fishy smell.
Dak goes to Lady Mayor Annabelle and warns her he thinks there's a double agent in Kaladar. He tells her that the party will be staying at rooms in the Hotel Kaladarian. He then tells General Izod they'll be at the Green Dragon Inn.
The party catches late night pub dinner at The Seedy Snake, a somewhat vile southside bar. Some party members espy a ghoulish figure who exits the pub via a private exit behind the bar. With his great strength, Yor throws Innominus at the departing ghoul, and the cleric first tackles then turns it.†
The PCs surround the ghoul in the Seedy Snake's kitchen and Hazel uses ESP to discover that it is spying on them on behalf of its master, a sinister, dark-cloaked figure. The PCs take the subdued ghoul to an inn on the next block, The Smelly Skunk, where they get a room and prepare to torture the ghoul spy . . .


Yor:
Prince Arkus was targeted -- am I also being targeted? 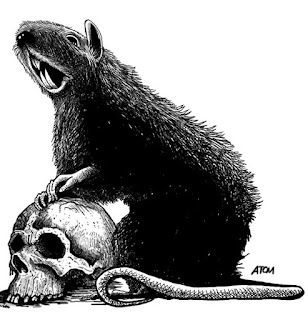 Just before dawn of Day 200. Very light snowfall. A rented room in The Smelly Skunk, a filthy inn in the South Gate District of the Free City of Kaladar. The PCs -- mainly Vivuli and Dak -- are torturing a ghoul to find out who it works for and why it was watching them.
Dak sticks a bunch of fishhooks into the ghoul, then threatens to bring back a high priest to destroy it. The PCs then exit the room, leaving the ghoul tied somewhat half-assedly to a chair.
Once the PCs are outside and across the street, Vivuli sends an invisible rat back into the room at the Smelly Skunk. Vivuli sees what it sees: a Peter Lorre-ish looking guy comes in, liberates the ghoul, covers it with a cloak, and walks it south 4 blocks then east 18 blocks into the Green Dragon District. The scrawny guy and the ghoul sneak into a cellar via a cramped alleyway. The rat follows. It sees the two meet a third figure, a black-cloaked wizard-y looking individual. All three vanish.


Dak:
Where are the fishhooks I stuck in that thing?

Innominus:
[casts locate object]
Teleported to a spot under the city, beneath Lookout Hill.

The PCs go six levels beneath the Free City, into the sewers, and Dak and Yor lift a huge rock cap to access an even deeper level. It is dank and rotten-smelling. Beastarr smells a doggish scent. They are attacked by 7 slime-hounds, who they eventually vanquish.

Rodrick the Thief:
He slimed me!
[dies]

--
* Notable arcanists in attendance include Zardoz the White of Kaladar, Zklek of Kaladar, Arel, Dicktoad the Inscrutable, Thorv, Arthurius, Threk, and Savlene.
** Main attendees include Lady Mayor Annabelle of Kaladar, Sir Draco of the Kaladarian Royal Guard, Delzarian General Aron, Achelonian Colonel Zorn, Noffellian Captain Conkle, Claude the Ranger, and Zimroth the Mysterious (a Delzarian Ranger).
*** A favorite weapon of the saurian balrogs, fire gems have been used recently by the party in Session 63 and by balrogs in Session 59.

† Yor is naturally quite strong and he also purchased a girdle of giant strength early in the campaign. What he doesn't know is that that the girdle is powerfully cursed, has already sterilized him, and will inflict even more terrifying calamities upon him if he does not get rid of it soon.