My concerns about having too many players in attendance last night (given that my optimal party size is 4-6) proved groundless, for the party who met in the Erratic Crow pub in Swampsedge at the start of our session  consisted of just four PC's:  Uncle Junkal the Juggler, a rodian bard, Percival the Scribe, a human historian and magic-user, Hazel, a human bard, and Innominus, a human cleric.

The party consists of two bards, a PC class I had not even considered allowing until these two players started describing their character concepts to me over the past weekend.  I am no great fan of bards in general -- like James M., I find them a bit nebulous and unfocused -- but it became clear that the bard would be the best class to use for these two players who wanted to play jack-of-all-trades type characters, so I swiftly ordered and downloaded Brave Halfling's Delving Deeper: Bard and used that class as the basis for Uncle Junkal the Juggler and Hazel the negotiator / charmer / mountebank.  Obviously, I tend to be far more interested in letting my players play the characters they imagine than maintaining any kind of fidelity to my stodgy preferences, so now we have two bards -- albeit very differently inflected ones -- in the party.

After meeting each other and consulting a couple of Swampsedge locals to confirm some orc raid rumors, the party swiftly moved out of Swampsedge toward the north, heading for an orc-ravaged village called Vedik that they had heard about in the local Swampsedge rumor mill.  Vedik is a day and half march north from Swampsedge, and during the first watch of the first night camping out in a copse near the northbound road, the group was attacked by a band of seven troglodytes.  [This was a case where I had to stick to my promise to myself to honor the die rolls, for part of me hesitated about sending in seven trogs.  I might have been tempted to reduce that number by two given that this was a party of four PC's with no front-line fighters, but I rolled seven trogs and I stuck to that.  My new mantra: The dice are fate.] 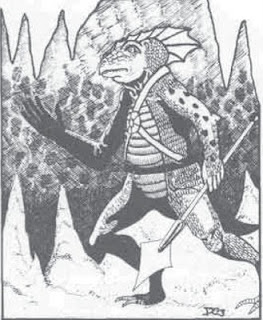 The attacking trogs would have achieved total surprise had Hazel (who stood first watch) not noticed their foul stench a split second before they attacked.  She alerted her sleeping companions, who sprung into action; we rolled for initiative and the party won.  Percival unleashed a magic missile, then elected to roll his once-nightly d30 roll for the damage.  This proved a master-stroke: he rolled a 28 for damage (!), and I therefore ruled that the missile passed through the first trog and roasted two more of its vile companions who were running up behind it!  With three trogs instantly fried, now the odds were evened out a bit: four remaining trogs versus four PCs.

Hazel got off a bow shot or two, then, once one of the trogs was upon her, she did an evasive maneuver and lured the trog closer to Innominus the cleric, who was a better melee fighter.  Innominus killed at least one of the trogs with his war hammer, though he did roll a critical fumble in there at one point, dropped the hammer, and had to switch to his morningstar.  Both Uncle Junkal and the trog he fought were unlucky die rollers, and went at least two rounds without hitting each other -- the poleaxe-wielding juggler would make a last-minute comeback though.  After his stunning magic missile triple-kill, Percival pulled out his bow and started shooting his companions' opponents in the back.  Combat raged on.  In time, Uncle Junkal dropped his trog with a mighty polearm strike, and Innominus and Hazel (who drew her dagger for melee combat) finished off the other remaining attackers.  Now the party was safe to sleep the rest of the night -- the two bards took watch shifts so the m-u and cleric could get full rest and recover their spells via memorization and prayer in the morning --  and to proceed onward to Vedik the next day.

While the party's peasant informant in Swampsedge (who had fled Vedik some weeks before) implied that the village council of Vedik might offer a reward for vanquishing the orcs, once the party arrived in Vedik it became clear that the locals did not have anything in the way of resources or wealth to offer.  The party negotiated with the Vedik locals for a future payment based upon the villagers' next years' crop yield and a promise of future assistance if the party should need laborers or henchmen.  We left off the session with the party preparing to head for the nearby orc caves with some local Vedik farmers / fighters coming along as hirelings.  There was also some talk about goats -- Innominus seemed keen to bring some goats along and herd them into the orc caves ahead of the party -- but I am not sure whether or not that issue got definitively resolved by the time we quit for the night.

My thoughts on the party: A very promising group!  They were able to keep their wits about them and survive the trog attack despite none of them being fighters.  Also, I am excited by the ideas I hear this group bandying about as they strategize: at one point, one of the players (Hazel's I think) brought up the idea of negotiating with the raiding orcs to get them to stop attacking Vedik and its environs.  Of course, orcs are not known for their willingness to parley with humans and their allies, so this suggestion may not be actualized, but the mere fact that such an idea got raised bodes very well for this party and its ability to "think outside the box" and not necessarily rush into every situation with weapons swinging.  Then again, Innominus seems to have a strong penchant for killing, so he may resist party efforts to negotiate with foes, and there's also Uncle Junkal, who wanted to "trade" the party's orc-dispatching services for complete dictatorial control of the village of Vedik upon their return!  So who knows where these whacko PCs will take things next?  I only know I am looking forward to it immensely.

My thoughts on the rules: So far, so good.  I think Labyrinth Lord is excellent and accessible, though I am still getting used to the layout of the book, and personally I wish the "Encounters and Combat" and "Labyrinth Lord Lore" sections were closer together in the book since those were the main sections I referred to during the session.  There were also a couple of additional house rules I decided to invoke at the last minute -- i.e., maximum HP for all characters at 1st Level, and yes to DEX-based initiative modifiers -- but overall Labyrinth Lord seems to be working great.  Even our total first-time rpger had no obvious difficulties in grasping the basic mechanics of character creation and combat, and this speaks volumes about the potential for old-school rpgs to lure in new players.  And for the first time in my DMing career I used morale checks!  I did two separate monster morale checks during the trog battle, once after Percival blasted three of them away with a single magic missile, and once after they were down to two trogs standing.  The trogs succeeded at the checks both times and fought to the bitter end.  I think I like the morale rules, and it makes even more sense to use them now that we have bards in the party who may want to influence the party's or their enemies' morale in future situations.