Suhl - Island Home of the Rodians

Suhl is the name of the island where the first rodians made landfall after the fateful voyage of the Tarandis.  Actually a small cluster of three separate islands, the rodian territory of Suhl lies at the southeastern end of the Bay of Noffel, hundreds of nautical miles south of the nearest Noffellian or Blintian ports.  The only mundane way to reach Suhl is via a seagoing ship, which typically means booking passage on a Noffellian or Suhlian vessel out of one of the southern Arandish ports on the Bay of Noffel.

1.  Suhl, the largest and most populated island, also called the Big Island.   The Big Island is long and somewhat boomerang-shaped, 75 miles long and 20 miles wide.  Its capitol city, Suhl (a medium town, population 8,000), is also its largest and most commercial port.  The city of Suhl is also where the Lord Governor of Suhl resides.  While there are many non-rodian merchants and travellers who visit the city of Suhl, there are few non-rodian full-time residents; for the most part the town and its island are inhabited exclusively by rodians. Some judgmental Noffellians have been known to snidely refer to Suhl as "Buccaneers' Port," which causes some Suhlians to anger and others to grin with roguish pride.  Further inland on this same island is the small town of Awra's Gate, where stands the Rodian Invokers' Guild. 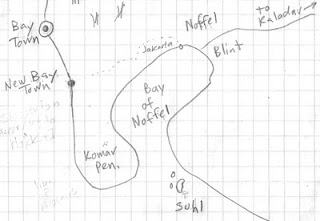 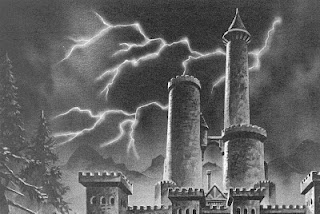 3.  Arkian [AR-kee-yan], home of the Suhlian Illusionists.  This tiny (20-mile diameter) island houses only one structure: the Black Cloister, the tower stronghold of the Suhlian Illusionists.  Some Suhlian Invokers and rodian merchants regularly deal with the denizens of the Cloister.   Most rodian commoners -- that is, non-adventuring residents of Suhl -- somewhat fear Arkian and its arcane denizens, and few rodians would come here uninvited except under dire circumstances.  Outsiders -- that is, non-rodians -- are discouraged from visiting Arkian at all.  The Illusionists of the Black Cloister prefer their seclusion.

As has been previously recounted, rodians first came to Ara many generations ago, establishing a few small (and now largely defunct) colonies and one large city, New Port, along the Arandish west coast.  Unfortunately, this is land that the elves of Aldoria also consider to be theirs, and a bloody conflict has raged between the elves and rodians there for some years now.  Despite this racially charged conflict, some seafaring rodians have established trade relations with the elves of Al-nurna, though most such traders are wary of their elven business associates and do not typically form lasting friendships with them.

The Suhlian rodians have also made contact by sea with the kingdoms of Noffel, Blint, and Kaladar, and a prosperous trade has grown between the Suhlians and these Arandish nations.

It is said that those wishing to explore the southern half of Rakar’s Peninsula would do well to first pass through Suhl, for there are many rodian seafarers who have knowledge of its coasts, and perhaps even a few of its inland secrets. . .