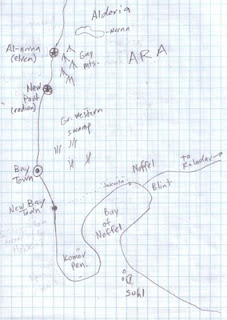 Particularly since I am starting my players off in the northwestern Noffellian town of Swampsedge, which offers swamp barge access to points further west into and beyond the Great Western Swamp, it feels high time to say a few words about the four major settlements that lie along Ara's west coast.

Note that those who set off via barge from Swampsedge will typically travel through Marsh Town before reaching the west coast.

Here are brief descriptions of the four Arandish West coast cities, proceeding from north to south:

Al-nurna
Al-nurna is a very large (pop. 16,000) elven city, ruled by an Aldorian prince.  Humans (except those few who serve on rodian crews) have never seen this port city, for the coastal Aldorians will not do business with humans nor do they welcome human visitors.  But seafaring Suhlian rodians have traded with the elves for some time, though most rodian captains are wary of their elven clients and do not typically form friendships with them.  I have never had an adventure party visit Al-nurna so I know little else about it.

New Port
New Port, today a large (pop. 12,500) and thriving trading port, originated as a rodian settlement and is still governed entirely by rodians.  In fact, New Port is called by some "New Suhl."  However, all are treated fairly by the rodian government and militia here, and inter-racial and inter-national trade is widely encouraged. Members of the various branches of the Karibekian family are (in some cases prominent) citizens here, and Captain Hokka is known to bring the Sea Scorpion to New Port with some regularity.  As previously mentioned, another rodian family, the Borasukians, have a respectable cargo transport operation in New Port.

Bay Town
Bay Town is a medium sized (pop. 8,000) town founded and maintained by affluent human nobles from the inland Arandish kingdoms.  It is a popular trading port for those dealing in expensive or rare goods, for the specialty markets of Bay Town are legendary up and down the west coast and in all the major cities of Ara.  Bay Town's local ruling council retains a formidable militia (commanded by and largely made up of retired Noffellian soldiers) that successfully keeps piracy and black marketeering largely at bay, or at least out of the public eye.  Bay Town is undoubtedly the most cosmopolitan west coast city, and most small-scale and/or law-bending sea captains are loathe to put in here, due to strict inspection laws and exorbitant harbor fees.

New Bay Town
New Bay Town is a small (pop. 3,500) yet seedy hive of scum and villainy, with lots of untrammeled coastal piracy nearby as well.  In fact, many locals call New Bay Town "Black Market City" because of the high volume of illegal materials that come through here from Marsh Town and elsewhere.  There is also a growing contingent of legitimate merchants and idealistic settlers who attempt to maintain law and order in New Bay Town despite the fact that they are always getting raped and robbed.  As you can see, this is a town ripe for adventure!