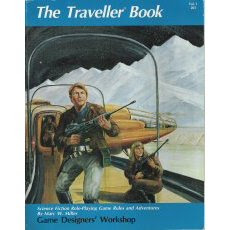 As I have previously discussed, in the olden days (the 1980s) one of the RPGs I loved the most was GDW's Traveller -- yes, the original little black books by Marc Miller.  Actually, by the time I started actively playing Traveller, GDW had released (and I bought) The Traveller Book (an 8 1/2 x 11 tome, blue-ish cover with a sandy-haired man brandishing a gun in the foreground) for the core rules, then supplemented that with LBBs such as Mercenary, High Guard, Traders and Gunboats, and adventures like The Chamax Plague/Horde and Marooned/Marooned Alone.

I liked  -- and still like --Traveller a great deal and would definitely use it as my default outer-space / sci-fi RPG system.  I think the rules system is extremely elegant, I appreciate the game-within-a-game that is character creation, and to me, the ships in Traveller -- the pinnace, the ship's boat, the air/raft -- look just perfect, vaguely reminiscent of Kubrick's 2001: a Space Odyssey or the TV program Space: 1999.  Bad ass!

I wish I still owned all my old Traveller books, especially the adventures.  Part of me holds out faint hope that they may still be in a box somewhere in my parents' house in the Seattle area.  But my instincts tell me that those books were probably lost during one of the unfortunate "purges" of my youth, when (a) I decided I would likely never play the game again (as I did with all my original AD&D materials circa 1990) and/or (b) I needed the money I could get by selling them back to a book or hobby shop.  Reminder to self:  No more purges!

But it appears I have been saved from myself by the wonderful folks at Far Future Enterprises, where one may obtain reprints of a great many of those original Traveller little black books.  Hooray!  As a kind of gratuitous coda to my recent rpg spending spree, I have in fact ordered the first of these reprint publications, "The Books 0-8."  This will prepare me in case my Labyrinth Lord party ever incidentally stumbles across alien technology somewhere in Ara (which I do have an avowed penchant for) -- and of course I look forward to feasting my eyes on all those great Traveller spaceships again!  Score!