As I have recently commented, the Labyrinth Lord rules have been working out just wonderfully for my role-playing group so far.  I really couldn't be happier.  In fact, the only house-rule amendments I have felt compelled to make to Labyrinth Lord as writ are these two:

1.  I allow players to search for secret doors multiple times in one area.

2.  I have a very generous character generation procedure, including allowing players to roll up six attribute rolls and order them as they wish.  This does give the players a bit more leeway to craft their own characters and it eradicates the random factor in character generation that James M. and others have blogged so eloquently about.  Note that I am generally pro-"risky" character generation (as in Traveller) and I probably wouldn't be so generous if I were refereeing a more "standard" (i.e., non-Arandish) campaign or adventure.  But given that much of the fun of adventuring in Ara (for me anyway) comes from playing the interesting new races (e.g., rodians) and classes (e.g., sword-clerics) specific to the setting, I wanted my players to have a wee bit more control so they could play those types if they chose to.  (It must have worked to some degree because we have two rodians in the current party.)

It says a lot that I have felt inclined to modify so little.  Further, it is a tribute to the comprehensibility and playability of the Labyrinth Lord rules system that my players are all picking up on the rules so quickly -- this is true even of those players who have had no prior RPG experience.

However, the players are so jazzed about the rules that they are all referring to the Labyrinth Lord rulebook a fair amount during play -- mostly to look up "to hit" charts and weapon ranges during combat, but probably also to "browse" the spell tables and other goodies as players are wont to do.  Thus I barely get my hands on my (paperback) print copy at all during an average session.  This is as it should be, for I sit at my computer desk during the bulk of session time, and refer to the art-free pdf of the LL rules when I need to look something up.  But I am an avowed lover of real, printed books, and it struck me a couple of weeks ago that I should have nice, hardbound copies of those key texts I will actually use, such as (obviously) the Labyrinth Lord Revised Edition rulebook.  So I ordered a hardbound copy of that book a couple weeks ago; it arrived here Saturday. 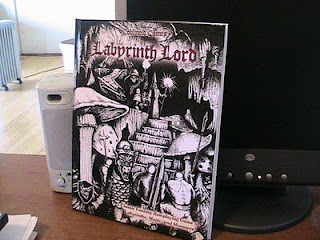 As a book lover, what a delight it is to have a nice, hardbound edition of Labyrinth Lord!  Furthermore, leafing through my hardbound copy of the LL rules Saturday afternoon, something really struck me: when you lay an open book down flat -- and when it is a hardback that easily remains open when laid down. . . 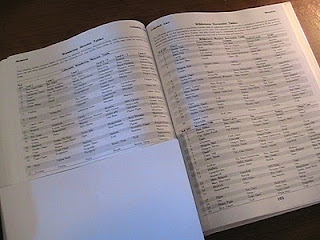 . . . then you can really see how the book's layout takes frequent advantage of the two-page spread.  Take, for example, the two pages of tables above.  (I have blocked out the original artwork for copyright protection purposes, though it's a shame because it really looks good.)  All the dungeon wandering monster tables and wilderness encounter tables are neatly grouped together.  So convenient and so aesthetically pleasing. 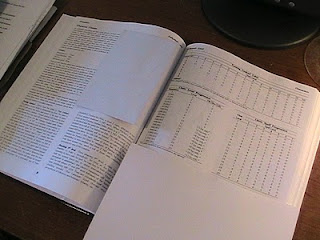 Or consider the "Cleric" pages above.  Again, all the descriptive text, tables, and illustrations having to do with a single character class spread out across two facing pages.  Very satisfying.
I know this must seem like really obvious stuff but what I'm marveling at here is that I did not really notice these finer nuances of the book's layout until I obtained it in hardback and could lie it flat.  I am so glad that I also ordered my Advanced Edition Companion in hardback.  I suppose Mutant Future will be next. . .
Anyway, these hardback editions are going to be my special, DM-only editions that I greedily covet on my side of the screen.  The players can continue to use my paperback copies while I fondle my new, glorious hardbacks.  (AEC please come soon!)