5 Best TSR Modules Ever (For Now)

Here is my list of the five best TSR modules ever. I am deliberately doing this from the hip, not letting myself overthink it, just going with what feels right. 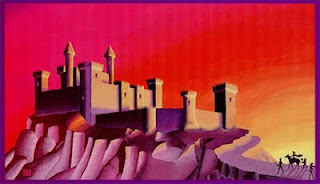 1. B2 Keep on the Borderlands
As James Maliszewki and Justin Alexander have pointed out, Gygax's B2 is a totally classic example of old-school module design, with the Caves of Chaos acting as a kind of introductory megadungeon (in a feat of "implied expansiveness" as Maliszewski puts it) set in a wilderness locale.  What is not to love about that?  This is an endlessly customizable and modifiable module, thus achieving very high re-playability value.  And it has the advantage of being the first module I ever played or DM'ed -- it came in my Holmes boxed set -- so it surely set the tone for EVERYTHING that followed in my RPG'ing career.

[EDIT: Read this post (and also this comment) for a really sharp, spot-on deconstruction of the usual assumptions made about B2.] 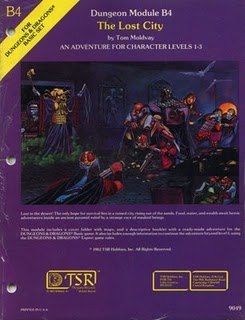 2. B4 The Lost City
I am so hot to play this one that it will very likely be the first scenario I trot out for the upcoming public Labyrinth Lord Game at my FLBS in September. 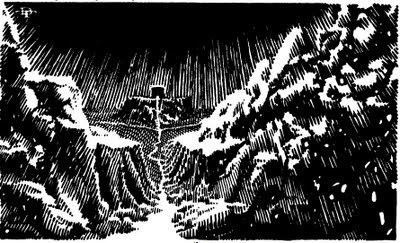 3. D3 Vault of the Drow
This one has always haunted me, it describes such an evocative and adventure-pregnant place.  Vault of the Drow is essentially another sandboxy hexcrawl, with political intrigue, factions, and the like built in to the various locales in the setting. I submit that this module represents the true climax of the G1-3 and D1-3 series, and could easily be used as the central locale for an entire underground campaign.  Note that it was somewhat difficult for me to choose this one over D2 Shrine of the Kuo-Toa, another personal favorite, but in the end it is the expansiveness of the Vault itself (and the spookiness of the Fane of Lolth) that gets me. 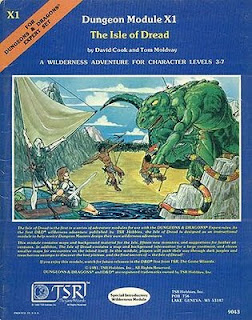 4. X1 The Isle of Dread
The coolest "lost island" hexcrawl. Badass dinosaur on cover. Lots of replay value since encounters can easily be modified or swapped out. What's not to love?

5. Q1 Queen of the Demonweb Pits
This last is a controversial choice because I am not really judging Q1 on its merits as a module alone, but more as a demonstration of what an extraplanar adventure can be. As I have discussed before, Q1 is not so much a module I want to run as a module I want to keep around as a reference and inspiration, to be read, pilfered from, and re-skinned in other guises -- more of an idea generator than a full-blown adventure. Looked at this way, even the map of the Demonweb alone is worth the price of admission! Maybe if we called this publication The Planar Travel Handbook and thought of it as more a sourcebook than a module, people would appreciate it more.

To be fair, if I were judging the Top 5 only in their functionality as playable adventure modules, I would toss out Q1 and give fifth place to S1 or S2, probably the former. 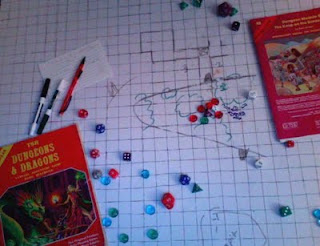 What I Have Learned
The above list tells me that I like sandboxy wilderness hexcrawls, and seem to prefer dungeons that either mimic such hexcrawls in an underworld environment (D3) or else directly provide them (X1, B2). It also shows my age, as I clearly prefer the "old classics" that I grew up with -- all my Top 5 modules were published before 1983.

Please note that of my Top 5, I have only actually played one of them, i.e., The Keep on the Borderlands.  It is therefore possible -- perhaps even likely -- that some of my module choices here are based upon my desire to finally play them rather than a verified-by-real-game-play knowledge of their strengths and weaknesses.  Perhaps my next task will be to connive ways to run and/or play in all of these modules at some time or another in the near future -- or at least the first four.

The Limits of My Knowledge (and Sample Size)
To fully grasp the limited relevance of my current Top 5 list, one must know what a pitifully small "sample size" of TSR modules I chose from in making these selections.  I have actually owned, read, and/or played a relatively tiny fraction of all TSR's published modules -- to say nothing of other old-school third-party publishers like Judges' Guild, a company whose work I know hardly at all.

To remedy the small scope of my current "classic module" knowledge, one of my new projects is to slowly acquire some of the old, out-of-print classics and read them, maybe even play them. Along this line I recently ordered T1 The Village of Hommlet from Noble Knight, and I look forward to finally laying eyes on a module of which James Maliszewski and Joseph Bloch think so highly.

But as you will see below, my need to make up for knowledge gaps in this area is rather great -- as I said, the number of published TSR modules I have actually used or even read is woefully small. I guess that's what happens when you start world-building: you get lost in your own game-world and use published modules less frequently.