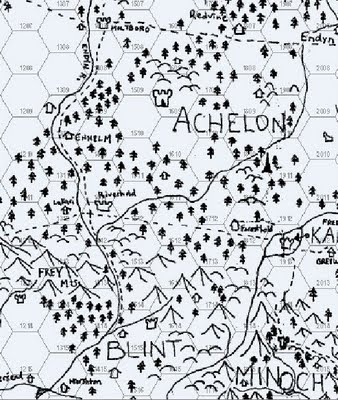 The group started Day 130 of its Arandish doings on the estate of Sir Barton of Achelon [hex 1308] in Northern Achelon. Bidding immediate farewell to Sir Barton, Innominus, Dak, Vivuli, and Gorgo ventured into the nearby small town of Holtboro [hex 1407] in order to ask some questions of the matriarchal Church of Achelon, the dominant local clerical order. At the Church Temple, Innominus and Sister Fenway discussed the strange evil medallions he discovered in that graveyard on the party's way northward through Achelon last session.

The Sister recognized the objects immediately, calling them "necromantic talismans" most likely used by a Necromancer to extend its power -- that is, she said, the Talismans act as magical relays to geographically extend a Necromancer's evil influence and necromantic abilities. Sister Fenway claimed to have seen one other such medallion, found by a fighting man who came through Holtboro some months ago. The fighter said he found his Talisman in the Great Western Swamp after a wraith attacked him there, but Sister Fenway could not confirm this, nor did the warrior leave the evil coin in her keeping for any extended period. She now asked Innominus if he would leave one of his Necromantic coins with her, so she and her cohorts could examine it further, possibly discovering its owner and/or source. Innominus complied, asking the clerics of the Church to send a message to his house in Fortinbras if they discovered anything interesting or alarming.

At the docks on the east bank of the Endyn River in Holtboro, the party met with Captain Niles of the Queen's Pride, a good-sized riverboat gifted to the PCs by Sir Barton. The captain and his crew -- First Mate Bixby, Oarmaster Clive, and ten burly oarsmen -- expressed their readiness to depart at any time. The PCs wasted no time; they loaded two of their Mizarian draft horses onboard, disassembled the War Wagon enough to place some parts onboard and to tow the bed and chassis behind the boat on the way downriver, and set off southward, bound for Blintsport on the Bay of Noffel. Due to limited space on the boat, their remaining three horses were sent overland to the Free City of Kaladar, in the company of one of Sir Barton's trading caravans.

The PCs spent the first chilly southbound day on the river (Day 130, a few solid weeks into the northern Achelonian winter) mounting the war wagon's ballista onto the prow of the Queen's Pride.* However, there were no foes to shoot at for the next two peaceful days of riverboating, and the crew made good time, covering well over forty miles a day and arriving at the beautiful river-straddling town of Riverhold [hex 1312] mid-morning on day four.** The party floated on through Riverhold and was well into the countryside to the south when an unexpected attack occurred.

The PCs heard the familiar but terrible sound of dragonwings flapping in the air somewhere above them, and next they knew, a vicious black dragon was breathing acid on their boat! One oarsman instantly disintegrated and the boat's hull was damaged before the PCs could react to the airborne menace. Innominus offered a Prayer to Endra, and then various characters and NPCs (including First Mate Bixby, a longbowman) shot projectiles at the dragon as it hurtled past, but failing, in the first volley, to slay the creature. The fearsome dragon swooped back to deliver another searing blast of deadly acid, then moved in close to strike at the party with claws and bite. Despite its ferocity, within a couple of rounds, the party managed to cut the black dragon to pieces.

However, no sooner had they disposed of the first dragon than a second black dragon appeared in the sky overhead -- apparently the first one's mate. After circling once, the second black dragon made to dive at the Queen's Pride; Innominus loaded his "sling of madness" and let fly a deadly projectile attack -- an attack made much more deadly by Innominus' election to use his nightly d30 roll for the damage. He rolled a "29", nearly enough to kill the dragon. Another character picked the dragon off with a bow shot the same round. After it crashed onto the riverside, Innominus' familiar, Beastarr, ate one of its testicles.

Post-melee, Dak asked Captain Niles if black dragon attacks were common in this region. Niles answered that such attacks were not atypical of the immediate area, but that he was somewhat surprised to have encountered black dragons hunting this far north. The riverboat captain surmised that these particular dragons must have had particularly difficult hunting further south to be ranging this far north this late in the year.

After a brief interlude for boat repair, during which Vivuli and Innominus dissected one of the black dragon carcasses, taking rigorous notes and gathering a few specimens of black dragon acid, the Queen's Pride got underway again.

That night, the smell of dragon's blood in the water brought sea snakes around the boat, but Innominus was able to snake charm a couple, and Vivuli and Dak shot arrows at the third one until it left. Late the next afternoon, Day Five of their southward journey down the Endyn River, they passed south of the Frey Mountains and entered Blint proper [hex 1414], whereupon Captain Niles optimistically opined that they might make Blintsport two days hence.

Indeed, the riverboat crew did make remarkably good progress over the next two days, passing the village of Blorch [hex 1515] on the first day and drawing within a few miles of Blintsport [hex 1316, mislabeled "Marshton"] by the evening of the second day.

However, in a bizarre move, fate decreed that Captain Niles would not live to see Blintsport, and sent -- you guessed it -- a black dragon to descend upon the Queen's Pride that evening. The dragon's first move was to breathe acid upon the riverboat captain, instantly disintegrating him. Captain Niles R.I.P.

After the captain's death, a colorful battle ensued, wherein Dak attacked with a sling, Innominus his mace, and Vivuli threw chunks of the other dead black dragons at their new foe, surely weakening its morale (or perhaps simply enraging it). During this melee the dragon did take out yet another crewman, First Mate Bixby, whom it bit in half. Nevertheless, a few rounds later the third black dragon of the session lay dead.

Midmorning on Day Eight of their riverboat adventures, captianless and carrying aboard the partial carcasses of more than one black dragon, the PCs arrived at Blintsport, a key port city on the Bay of Noffel that lies at the confluence of the Endyn and Blintsflow Rivers. 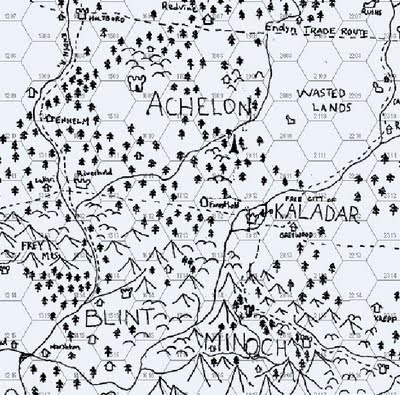 Seeking a replacement captain for the journey eastward up the Blintsflow River, the PCs visited a local sailor's bar called the Salty Serpent. There they met Captain Snargler, a local riverboater happy to help them pilot the Queen's Pride up the Blintsflow to the River Farn [hex 1616] and onward into central Minoch.

The PCs also visited a local adventurer's pub, the Blintsport Inn, and impressed the clientele with tales of their three recent black dragon slayings. To verify their tale, Dak and Innominus handed out complimentary black dragon scales! After presenting themselves as fearless dragon hunters, it was not difficult to successfully negotiate the hire of Rodney, a Blintian polearm-wielder eager for mercenary adventuring work. Learning that Rodney was also a proficient archer but currently without longbow, Dak bought the retainer such a bow, hoping to impress the warrior with his generosity.

The next day, Day 139 of their Arandish exploits, the party left Blintsport, headed east toward the village of Wellspring in central Minoch. Of the Queen's Pride's original crew, only Chief Oarsman Clive and nine other oarsmen remained; Blintian Captain Snargler was now in command.

Aside from spotting (and avoiding) some giant piranhas and crashing into a couple of huge ice floes, the party arrived without incident in Wellspring [hex 1816] seven days later, on Day 146 of their Arandish adventures -- now approaching the dead of winter.

[UPDATE: I capitalized "War Wagon" and clarified why some of the party's horses were sent overland.]

--
* We statted our ballista using Module B2 Keep on the Borderlands pp. 6-7, which describes the ballista as "a huge, heavy crossbow manned by two men. It fires like a crossbow, but has a range of 480 feet, hits as if it were fired by a fighter of 1st-3rd level, and does 2 six-sided dice of damage plus two points (4-14 points of damage per hit). Each ballista has 12 missiles. They may only be fired once every four rounds (requiring 3 rounds to load and 1 to fire)."
** Riverhold straddles the Endyn River; as such it occupies space in hexes 1312 AND 1412. The party passed under portions of the western side of the city, in hex 1312.