I think Beedo over at Dreams in the Lich House has been on quite a roll lately -- his posts have been getting me all jazzed up and inspired. His latest one, which constitutes the debut of a new regular feature called "Saturday Sage Advice," considers the use of encounter tables as the very definition of a campaign setting.

This is a subject I remember Zak blogging about, talking about how we should describe our settings "in the form of rules (and monsters and items and all that) and nothing else." In other words, as Zak so eloquently puts it,  we should "build the fiction out of the tools you give us to run it." I like that idea a lot. 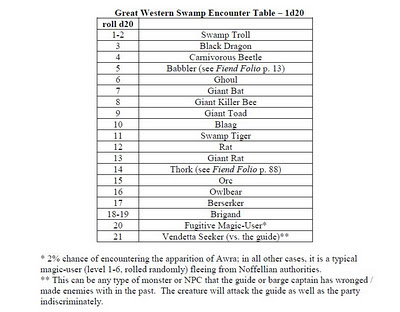 Beedo does too, celebrating collaborative setting generation wherein "details emerge organically through play at the table and no mind-numbing info dumps are necessary. Players learn details only as they become relevant." Indeed!

James Maliszewski has commented on this idea before, including back when he discussed his original intentions for Dwimmermount, stating that "Dwimmermount is explicitly an experiment in seeing how both rules and campaigns develop organically through play. [. . . ] The setting[s], like the rules, are living things and they grow best in response to stimulus, not by being force fed."

This sort of stuff has been on my mind lately due to my decision to abandon the megadungeon project on the grounds that it was being "force fed" rather than organically grown through play. In the same post in which I announced the megadungeon's temporary cancellation, I mentioned my interest in other projects such as the Lands of Ara Compendium 2011 (due early 2012) and The Tower of Death (due 2012) -- both of which HAVE grown through play. That is why they remain viable.

Even more recently, I have begun to talk with Spawn of Endra about a future project called The Lands of Ara Gazetteer, and this is where the "build the fiction out of the tools you give us to run it" ruminations really come into play for me. I have already written text blurbs about many of the key regions of the Lands of Ara for this blog (see Gazetteer hyperlinks on this page), and see no reason to repeat them in a more formal Gazetteer. No, our Gazetteer may have some very short text blurbs for each region, but it will mainly consist of encounter tables, maps, NPCs and monsters, and all that usable, gamable stuff that would allow people to play adventures in the Lands of Ara. That is a superb game product design principle, and I thank Zak and Beedo and James M. for reminding me of its importance.

In fact, thanks are due to all the various OSR Sages who have helped me improve my game, as well as the ways in which I share it with the public. The RPG projects that are flourishing over here at Lands of Ara Enterprises are the ones that have grown out of the insights I have gained interfacing with the OSR blogging community and playing Labyrinth Lord these past couple years. I literally could not have done any of this without you!

And best of luck on the new regular column, Beedo. I know I'll be tuning in.