This post is part two of a two-part series in which I attempt to answer Jeff Rients' list of "Twenty Quick Questions for your Campaign Setting." My first ten answers are here, and Jeff's answers about Wessex are available here and here.

So here is Part 2 of "Twenty Quick Questions for The Lands of Ara":

11. Where can I hire mercenaries?
Almost anywhere in the areas right around the Bay of Noffel -- i.e., the Free City of Kaladar, the Noffellian port towns of River's End, Silverhilt, and Jakama, and/or the Blintian bayside metropolis of Blintsport. In the north, your best bet is Tradefair or Ironcrown, though a certain number of B-grade mercs and swamp-lurking types are probably available in Swampsedge.

12. Is there any place on the map where swords are illegal, magic is outlawed or any other notable hassles from Johnny Law?
Arcane magic is outlawed in Noffel, upon punishment of exile (for the most minor infractions) or death (for everything else). And in general, as far as law enforcement goes, the Noffellian High Guard, the Kaladarian Royal Guard, and the Telengardian Roughriders are the most feared, manichean organizations in the Lands.

13. Which way to the nearest tavern?
I have blogged about this before, but now, thanks to the travels of my current PC party, I can happily add a few more entries to the list of Noteworthy Inns and Taverns of Ara. Here are some key establishments the PCs in my current campaign have visited during their adventures so far:


in Farn Junction
- The Lazy Basilisk, an adventurer's bar
- The Stone Mountain Inn, a dwarven establishment


in the Free City of Kaladar
- The Orc's Balls Inn, a somewhat seedy establishment near the South Gate
- The Greedy Lion, in the North Wall District

In general, it is not difficult to find a drinking establishment anywhere in Ara, though many Noffellians tend to be restrained drinkers or even teetotalers, as are some fairly extreme Telengardians.

14. What monsters are terrorizing the countryside sufficiently that if I kill them I will become famous?
There is always Krakko the Iron Drake, who is so notoriously hated and feared that his death and killer would be celebrated forever throughout the Lands of Ara and beyond.  More realistically, there is a greatly feared red dragon named Razgar who terrorizes northern Ara, a rumored Troll-King in the wildlands down south of Mizar, and many notorious hobgoblin tribes in the northeastern dwarven lands and in the central Minochian mountains.  Lately, there seem to be a great many black dragons terrorizing central and southern Ara as well. And lastly, in the region of the Great Western Swamp, anyone who could exterminate a sufficient number of swamp trolls so as to reduce their deleterious impact on towns like Swampsedge and Sluggerton would be thanked, rewarded, and revered in that region for years to come.

15. Are there any wars brewing I could go fight?
Yes, the so-called New War between Delzar and Mizar, which is really just a long, drawn out border dispute, but no less violent or bloody for it: a great many Mizarian, Delzarian, and mercenary lives are lost to this longstanding conflict every day.  At the opposite corner of the map, there are (rumored) skirmishes between elven and rodian forces taking place in the far northwest, near the western Arandish sea coast on the city of New Port. And of course, there is constant territorial infighting in many places throughout the Western Lands.

16. How about gladiatorial arenas complete with hard-won glory and fabulous cash prizes?
Arenas and gladiatorial battles (to the death anyway) are considered somewhat uncivilized in southern Ara, though there is a famous old arena in Highgate, nowadays only used for ceremonial purposes. However, there is a thriving gladiatorial circuit in the Western Lands and parts of Telengard: Ironcrown, Tradefair, and even Swampsedge all contain active gladiatorial competitions.

17. Are there any secret societies with sinister agendas I could join and/or fight?
The most noteworthy (or notorious) of these would include: (1) the Red Hand, a super-secret assassins' guild supposedly based in Kaladar, (2) the Invisible Hand, a secret society of powerful wizards who resist Arandish law, refusing to join the Council of Arlon, and (3) various dragon cultists, the most terrifying and evil of these latter groups being the one that worships the aforementioned Krakko.

18. What is there to eat around here?
This is the hardest one to answer, and it varies regionally.  The lands immediately surrounding the Bay of Noffel, i.e., Noffel and Blint, serve a lot of fish and seafood; Blintian mussels are treasured throughout southern Ara.  Minochians herd a lot of goats, but also grow various vegetable and grain crops in the areas east of the high mountains.  The most lush farm- and grazing lands in Ara are in central Achelon and throughout Delzar, so practically any edible crop or form of livestock may be consumed in those Lands or in the Free City of Kaladar.  Despite monster incursions, sheep are raised in many areas of northern Ara and the Western Lands.  Telengard, consisting largely of blighted lands, depends upon local goat-herding as well as imported grain, fungi, and meat from the northeastern dwarves for its sustenance.  Mizarians occasionally herd cattle, and when they do the meat produced is the finest in the Lands, but they mostly prefer to hunt large land mammals (tigers, oliphants, etc.) that roam the southern plains.  And lastly, there have occasionally been unusual fruits and meats brought back by explorers of the southwestern Komar Peninsula, but none of these exotic offerings has yet taken a firm or consistent place in the culinary traditions of the Lands of Ara.

19. Any legendary lost treasures I could be looking for?
Yes, The Crimson Blades. 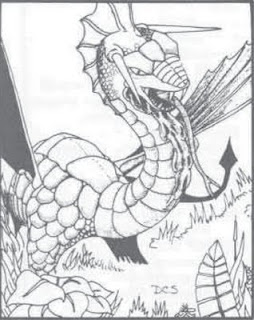 20. Where is the nearest dragon or other monster with Type H treasure?
Well, converting that "Type H" B/X / AD&D designation into a Labyrinth Lord Hoard Class using my handy-dandy Treasure Type Converter, I see that this query refers to creatures of Hoard Class XV, i.e., dragons and dragon turtles but not much else.  So I would refer you to item 14 above, which is mostly a list of dragons anyway.