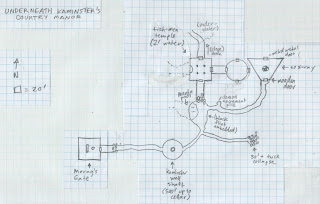 Underneath Kaminster's Country Manor.
Map scale = 20' per square.
This concluding part of Session 44 started right near the end of recently killed and subsequently raised Dak's two-week recovery period, roughly Days 161 and 162 of the party's Arandish adventures.

The still-mobile members of the party ventured back down the 500' shaft a few times during Dak's recovery time, to have Viv do x-ray searches of the various rubble piles and to collectively perform such excavation operations as could be safely conducted. Thereby were recovered a few more items of interest, including a note reading: "Dearest Bobby -- Keep the faith. --Sir Reginald"

In related news, Innominus cast Tale of Death on the skeleton he and Dak had earlier excavated from a rubble pile in the caverns far beneath Kaminster's Country Manor. He learned that the fellow had died by being ripped to shreds by three saurian Balrogs named Gor, Threk, and Zorchl*. 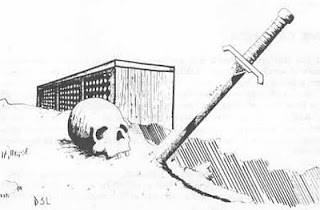 Meanwhile, Yor sent a letter north to his relatives in the mountains west of Farn Junction, hoping to obtain news about the fate of the supposedly plague-ridden city. After a few days wait, Yor's relations reported the worst: yes, there seemed to be a deadly plague sweeping the walled town. The malady was known locally as "the Dark Plague" but Yor's dwarven cousins hadn't seen any actual cases in person; they were staying the hell away from the town and the roads.

The day of Dak's restoration to full health, Day 163 of the party's Arandish adventures, the whole group returned to what was left of the Temple of Thoopshib. Innominus inserted a gold coin (1 gp) into the slot at the base of the (now demolished) altar. The coin instantly vanished. The cleric then cast Locate Object and sensed that the coin was now far away beneath them, more or less directly downward from their present position.

So Innominus next cast dispel magic on the Thoopshib Temple's eastern exit door, green sparks shot everywhere, and the door opened. The party proceeded along a 40' eastbound passage to another door marked with the Thoopshib fish-head glyph. Dak hand-axed this glyph, only to be zapped by green sparks and knocked a pace back by the potent electrical charge. So Innominus deployed his second dispel magic spell against this magically warded door, which opened, leading into a circular chamber almost 60' in diameter.

Viv inspected the whole place with his x-ray vision, and discovered that the circular room was in fact a cylindrical elevator car seated within a slightly larger (60' diameter) shaft. Through the three other Thoopshib-glyph doors, he saw a passageway (north), a small control room with knobs and four levers (east), and another passageway (south).

The session ended with the group standing in the elevator room.

--
* The "chl" at the end of Zorchl's name is an approximation of a letter (and pronunciation) with no direct equivalent in human language.