"We're at war with the legions of hell!" -- Dak the Younger

This session started in the wee hours of morning on Day 179 of the party's Arandish adventures; the PCs were standing over the slain body of their longtime associate Gorgo, who perished in an unexpected hill giant attack the night before. After displaying the giants' heads on poles in a circle around the headless corpse of the red dragon they also recently slew, they set off to locate the latter's lair, which they surmised (a) must be nearby, and (b) must contain shitloads of treasure. 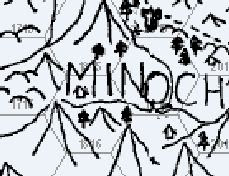 Both Greystone Mountain and the village of Wellspring lie in hex 1816.

Since the village of Wellspring lay less than a day's travel to the north, the group decided to head there first to see if any of the locals knew of the red dragon's dwelling place. They trudged for a few hours through very light snowfall, descending Greystone Mountain, crossing the icy but not yet frozen-over River Farn, and entering the village from the south. They visited the village's main lodging-house, the Inn of the Snow Leopard, met its proprietor, Bob, and partook of some excellent mutton stew. Bob told them of a local wise man named Grumbledook who lived in the woods at the eastern edge of the village -- he suggested that Grumbledook would know much more about the comings and goings of local monsters than anyone else in the area. He also told the party that the council of village elders would be honored to throw a feast on behalf of Yor, the new Baron of Rogaland, that evening. Yor and company graciously accepted this offer.

The party left the Inn and headed to the northwest corner of the village to the Church of Rogaland. There, Innominus requested that Gorgo's body be placed on ice, to preserve it until such time that it could be raised from the dead. The local clergymen complied.

Then the group headed eastward out of the village, to the wooded copse where the reclusive Grumbledook was known to dwell. A rabbit guided them back to a clearing deep in the snowy woods, where sat a huge bearded fellow wearing layers of furs and a dirty brown cloak. This was Grumbledook. 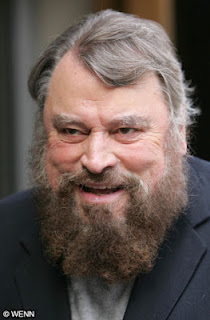 Grumbledook led the party to a smallish hut deep in the copse, and bid them enter. The place was much larger-seeming on the inside than it had appeared to be on the outside.

After lighting a fire, Grumbledook told the party that the female red dragon they killed was Harak, known to most locals as "Zelda." Her mate was an ancient red named Boris, who dwelt atop a craggy mountain far southwest of here, on the Blintian frontier [in hex 1617].

Grumbledook also carried on his own private conversation (in a tongue no PC could comprehend) with Beastarr the Bobcat, telling Innominus afterward that the feline familiar would become an important player in regional events yet to come.

The PCs returned to the village proper and reclaimed their riverboat, the Queen's Pride, from the boathouse in which they left it five weeks earlier (at the end of Session 38). The group spent the afternoon readying the boat and acquiring new oars and poles.

That night, a feast in their honor. Yor, Baron of Rogaland, told the village elders to prepare an evacuation plan for the village in case of imminent balrog attack. The group spent the night in the Inn of the Snow Leopard, though they did not pay a fee for their lodging given Yor's status as Baron.

The next morning, Day 180 of the party's Arandish adventures, the group loaded up the Queen's Pride and, leaving two archers and all their horses behind in Wellspring, set off downriver to the west under moderate snowfall. They anticipated a three day journey to the Blintian town of Marshton [hex 1517], where they would re-supply and prepare to approach Slag Mountain, home of Boris the Red Dragon.

Marshton is actually in hex 1517, north of the Blintsflow River; the city erroneously listed as "Marshton" on the above map is Blintsport.

After their first day on the river, the group decided to travel by night as well, having the dwarves keep watch with their infravision.  Thus, by midday on Day 181, the group had reached the confluence of the Rivers Farn and Kaladar into the Blintsflow [hex 1616]. Shortly after passing this fork, the party was attacked by a vicious band of six hill giants, who approached from the south and waded into the icy river to attack the party with clubs and spears. The party eventually vanquished these foes, but not before significant damage was inflicted to their boat. They held up and camped and repaired the Queen's Pride using parts from the War Wagon, which they had been towing behind them since Wellspring. After this brief hiatus, they set off downriver for Marshton on the morning of Day 182.

However, a huge snowstorm rolled in that day, and within a couple of hours, the Blintsflow had completely iced over and the party was completely buried in snow. They decided to build a shelter using the sail of the Queen's Pride and yet more parts from the War Wagon, and ended the session at the bend in the river in hex 1517, mere hours away from Marshton but unable to get there.