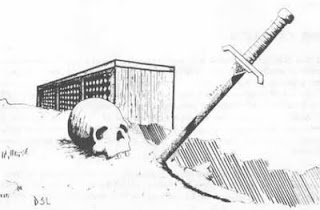 I am no great fan of having tons of magic items in my campaigns.  No, I prefer a sparse distribution of magic items that favors either extremely low-level stuff -- rods of continual light, potions of cure light wounds, the occasional ring of invisibility, a sprinkling of +1 weapons and armor -- and/or full-blown artifacts with unique histories and tons of powerful NPCs of all stripes seeking to take possession, usually violently.  Dave Miller, my co-creator on Crimson Blades of Ara, must have felt similarly, and together we devised an alternative to having abundant magical weapons drifting around in the Lands of Ara: the superiority of dwarven steel.  That is, we posited that dwarven miners and smiths in the principal dwarven city of Gannar in northeastern Ara discovered the secret of making steel sometime prior to the end of the Old War, and wisely kept the knowledge of steelcraft to themselves.  After the Old War ended and the dwarves declared independence from Telengardian human rule, they began forging -- and already had the market cornered on -- what quickly became the most valued non-precious metal in Ara.  I suppose with our "dwarven steel" scheme we were really just riffing on Tolkien's mithril to some extent, but hell, who doesn't steal from Tolkien at some point or another in this hobby?

Anyway, what follows are some notes on the availability of "standard" magic items in Ara, followed by a description of Arandish dwarven steel and its properties.

Magic Items and the Arandish Enchanters' Guild
Enchantment, the endowment of scrolls, weapons, armor, wands, rings, amulets, etc. with magical powers or properties, is an arcane magical art practiced by Arandish humans -- but by NPCs only.  The sole Enchanter’s Guildhall in Ara is nestled in the mountains of central Minoch, and from this facility and the nearby Minochian trading town of Farn Junction, the Enchanters Guild does business with nobles from the various kingdoms of Ara, as well as magic item vendors in the Free City of Kaladar and elsewhere.  Note that all magic weapons and armor in Ara are presumed to be forged of iron, since dwarven steel cannot be enchanted (see below). 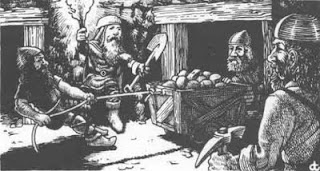 Dwarven Steel
Dwarven steel is the strongest, most expensive non-precious metal there is on Ara. It is fairly hard to get, since dwarves alone know the secrets of its mining and manufacture, and steel items take much longer to forge than similar implements made of iron or bronze.  Steel is highly sought after by dwarves and non-dwarves everywhere.  It comes in two varieties:
New Steel, which includes any steel implements made after the end of the Old War, is of slightly lesser cost and quality than older steel weapons and equipment. By and large, methods of craftsmanship have become more industrialized in recent years, and much of the fine art of steel craft has given way to larger-scale production techniques.  Items crafted from New steel (usually weapons, armor, or decorative items) cost at least forty times what iron implements cost (e.g., a New steel short sword costs, at a minimum, 280gp) and, as I mentioned above, are fairly rare and quite hard to get.  Performance is amazing: New steel weapons offer a +1 bonus to all attacks, they do one and a half times normal (iron) weapon damage, and New Steel armor is 1 AC lower than standard armor.
Old Steel implements are even rarer and more expensive than New Steel ones.  Old Steel is easily recognizable due to its brilliant bluish luster and its incredible effectiveness: Old Steel weapons attack at +2, do twice the damage of their iron counterparts, and Old Steel armor is 2 AC lower than standard armor!  The cost of an Old Steel weapon or implement is usually around two hundred times the cost of a comparable iron item, but would never be sold to a non-dwarf, and probably would never be sold, period.
There are only a few practical places to obtain dwarven steel weapons and armor:
(1) In the dwarven realm of Gannar, one could attempt to purchase or trade steel from the northern dwarves themselves.  Expect to pay the maximum price unless you are well known and liked by the dwarves, or are close friends with a particular dwarven steel-smith.  Steel bought from the dwarves in this way will always be New Steel. . . they consider what Old Steel artifacts they do have left to be sacred, and would never sell such things to an outsider.
(2) In the Free City of Kaladar, there is bound to be someone who will have what you’re looking for, but the sources are often illegal and always astronomically priced.
(3) There is some steel weaponry lost out in the wide world somewhere.  Dwarves have been crafting steel for nearly a millennium—there are bound to be stray items scattered about the wilderlands of Ara, ripe for plunder or purchase.

Note that dwarven steel cannot be enchanted nor endowed with magical properties by human enchanters or magicians of any kind.  It is rumored that certain dwarven steel-smiths have been able to imbue steel weapons and items with unique powers, but that notion is vehemently denied by the dwarves of Gannar and has never been otherwise substantiated.