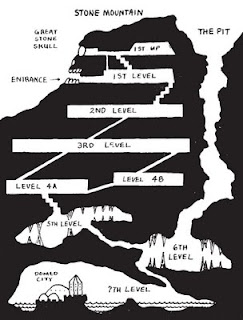 [PLAYER SPOILER ALERT: If you are a prospective player in my forthcoming 2010 Arandish Labyrinth Lord campaign, READ THIS POST AT YOUR OWN RISK.  It contains information that could ruin surprises I have in store for you.]

As James at Grognardia has written:

When I say "megadungeon," I'm talking about what Trent Foster calls a "campaign dungeon," which is to say, an adventuring site so large, open-ended, and dynamic that it becomes a campaign setting unto itself -- a kind of "dungeon wilderness," if that makes sense.  [. . .]  A megadungeon, by its very nature, [. . .] [is] "impressionistic" and relies heavily on ad hoc adjudication by the referee, as the players explore it.

In the most general sense I have always used this open-ended "megadungeon" concept for my campaign settings, though in my case I have tended to prefer wilderness areas to actual underground dungeons much of the time.  I suppose that in theory, the Lands of Ara is my megadungeon, embodying a kind of Wilderness-as-megadungeon concept applicable to the setting as a whole, or to certain regions like the Great Western Swamp, which could be seen as one huge, outdoor megadungeon.

However, I believe "sandbox" is actually the more accurate term for the Lands of Ara.  For information about sandboxes and how to construct one, see this extremely helpful post on sandbox construction by Bat in the Attic.

In terms of more traditional, underground types of megadungeons, I have recently come up with five ideas for megadungeon sites / concepts for the Lands of Ara.  I will now elucidate these in broad, "impressionistic" terms.


Novellan Mountains (Northern Telengard)
These high mountains teeming with bulettes and rock trolls are a possible location for the Vaults of the Hobgoblin King, a rumored underground complex of huge proportions presided over by a super-powerful (and possibly demonically assisted) hobgoblin king.  In addition to the hobgoblin king's Vaults, these mountains could serve as an excellent ongoing adventure location, due to the following dangerous attractions:
1.  Bulette country, including hunters who pursue bulettes.
2.  The nearby dreaded Ghardash Wilderness, filled with high-level monsters and strange, dark wizardry.
3.  Razgar the Red Dragon.
For more information see this post on Telengard and/or this one, a Novellan Mountains encounter table.

The Spire of Mornlyn (Southern Achelon)
The spire of Mornlyn in south Achelon is an obsidian spire about 300 feet high that sits over an underground chaos node -- a deep node of primordial chaos and evil energy.  There has always been much strife in the surrounding area -- for example, the Old War between Achelon and Telengard, plus the many battles over control of the city of Kaladar -- and many attribute this turmoil and violence to the influence of the spike.  The Mornlyn Spire is also where Arlon imprisoned the evil necromancers at the end of the Old War, and despite their escape, much of their dark energy is believed to linger in the locale.

I posit that the Mornlyn Spire is really a negative / evil / necromantic energy conductor, wicking such energy out of the once-sealed prison chambers at its base (and buried sub-levels below. . . ) and projecting that evilness out into Ara's stratosphere.  Of course, this negative energy discharge may be traveling out into space and attracting horrible extra-planetary attention to Ara. . .

I have used Mornlyn as an adventure locale a few different times; in my own Arandish campaigns, it is the "most famous evil place" in the Lands of Ara.  (Crimson Blades of Ara's co-creator Dave Miller tended to favor the Ghardash Wilderness as Ara's most notorious locale -- see Novellan Mountains above.)  Yet no party has yet ventured below the first couple of levels, those housing the necromantic prison designed by Arlon.

Ancient Minochian Underworld (Minoch)
Minoch is small and entirely mountainous country.  It is tough to travel to, for its mountains are high and steep, and riddled with rock troll warrens.  Furthermore, the weather, particularly at higher elevations, is harsh.  Minoch is known for its long, cruel winters.

The Great Catastrophe of Minoch, in which most of the original settlers of this region disappeared, is thought to have happened in Old Calendar year 787.  What few Minochian records survived the destruction of the original Minochian people and their culture do not make clear what exactly occurred.  Suffice to say that some force caused the demise of this ancient civilization and scattered the survivors. The last king of the ancient Minochians was Orlannas III.

Minoch has since been resettled by humans from all over Ara, but most prevalently from mountainous regions like northern Noffel and Telengard, and nearby Mizar.  Present-day Minochians most often have mixed Mizarian and either Noffellian or Telengardian ancestry.

While I have never taken a party to the buried ruins of ancient Minoch under-the-mountains, I know from a brief campaign there run by Scott Peoples that the Great Catastrophe was that ancient Minochian miners dug up some more ancient and/or alien and/or super-potent creature or power, a power / horde / being that consumed them, enslaving them to a bunch of demonic / undead / Shoggoth-type minions. Thus I would treat any venture to Ancient Minoch as a trip into a dark, horrific reality with bizarre aliens / horrors run rampant.  Maybe James Raggi's Death Frost Doom would plug in well here.

If I ran an ancient Minochian megadungeon I might also include some kind of mass hobgoblin and/or demon incursion(s) into the underground realm of ruined Ancient Minoch -- the hobgoblins have burrowed over (on orders from their own demon council) from the eastern Arandish mountains, beyond Mizar and Delzar.

Ancient Pre-Noffellian Ruins (Komar Peninsula)
The peninsula south of Noffel and the Great Western Swamp is an area ripe for wilderness adventures as well as exploration of a rumored huge, ancient megadungeon -- the last remnant of the lost civilization that predates the ancient Noffellians.  The southern two-thirds of the Komar Peninsula (below the swampy northern third) is a tropical rainforest with vast expanses of jungle and many huge mountains -- very difficult travel and probable high density of dangerous and unusual monsters.  Strangely, I have never used this region despite its exciting possibilities, although Scott Peoples once staged a campaign Endgame there with all the human armies of the Lands of Ara battling it out with a huge fleet of invading interstellar aliens!

If I were to use the Komar Peninsula -- called "Rakar's Peninsula" by the rodians, in reference to a much-dreaded race of scorpion-like humanoids called Rakars who dwell there -- as a megadungeon locale, I might use a Hidden Shrine of Tamoachan (Module C1) kind of vibe, starting it with a vast ruined temple and/or city complex, a place inhabited by gods and monsters heretofore unseen in the Lands of Ara. . .


The Troll-King's Castle (Wild Lands South of Mizar)
I have always felt that somewhere a good distance south of Mizar there must be a vast civilization of trollkind, presided over by a Great Troll whose powers rival a demigod's.  The existence of this Great Troll-King's Castle and its surrounding underground warrens and monster-infested cities would allow for a kind of Keep on the Borderlands setup, where Mizar is the relatively safe home base defended by humans and their allies (i.e., the "Keep"), and the Troll-King's Castle is the variously approachable and infinitely changeable "Caves of Chaos."

I have never actually taken a party south of Mizar before, but it is a vast plain largely unexplored by Arandish humans.  It seems likely to me that in addition to the Troll-King,  there is probably a barbarian-king as well, and maybe a bunch of cyclops and/or giants thrown in for good measure.  And of course a race of deadly Rakarian scorpion-men invading and attempting to colonize this region from Rakar's Peninsula (called the Komar Peninsula by Noffellians and the Northern Arandish) across the Bay of Noffel.