Minoch [MY-nock] is a relatively small mountainous region widely believed to have been haunted by strange energies and ghostly spirits long before the first Arandish human settlers (the Minars of ancient Noffel) came here in the decades following Old Calendar year 171.  These weird energies are thought to influence Minochian natives to this day, making them seem distant and strange to many other Arandish people, though this may also have to do with the geography and climate of the region: Minoch's mountains are high, steep, and riddled with rock troll warrens, and the weather, particularly at higher elevations, is harshly cold.  Minoch is known for its long, cruel winters, as well as its rock trolls and dire wolves.

It is fairly certain that by Old Calendar year 360, the early Minochians -- immigrants from ancient Noffel --  had made contact with the Mizarian horse raising tribes to the east and south.  Limited trade between these peoples may even have taken place in the years following initial contact.

In Old Calendar year 392, the people of southeastern Minoch were devastated by a series of large-scale assaults by southern hill trolls.  The surviving Minochians were driven into the high mountains, and what little contact existed between these people and their ancestral brethren to the west in Blint and Noffel was severed.

By Old Calendar year 431, bronze was being smelted in Minoch, and bronze weapons are forged to repel invading hill and rock trolls.  Further, bronze implements of all kinds are traded to the Mizarians for grain, wool, and horses.  The introduction of bronze tools and weapons to the Mizarians will allow the horse tribes to drive back the trollish hordes and become the new masters of the southern plains.

The "uncanny" properties of the Minochian region are almost certainly connected in some way with the Great Minochian Catastrophe of 787, in which most of the original settlers of this region suddenly and inexplicably disappeared.  What few records survived the destruction of the original Minochian people do not make clear what exactly occurred.  Some force caused the demise of this ancient civilization and scattered the survivors.

Minoch has since been resettled by humans from all over Ara, most prevalently from mountainous regions like northern Noffel and Telengard, and nearby Mizar.  Thus present-day Minochians most often have mixed Mizarian and either Noffellian or Telengardian ancestry. 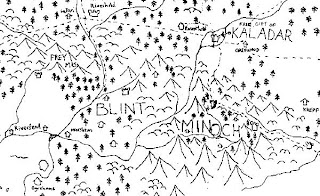 Minochian Geography
On the map excerpt above, cropped out of the older large Lands of Ara map (Map #1, downloadable here), the first Minochian town encountered as one ventures south on the trade route from Kaladar is Farn Junction.  Farn Junction (a medium-sized town, straight above the "o" in "Minoch") is the central trading point for Minochian imports and exports -- most notably, dwarven-crafted iron implements are brought here from the northeast for enchantment by the Enchanters' Guild nestled in the high mountains of Minoch.

That other Minochian town to the southeast of Farn Junction (to the right of the "h" in "Minoch") is Fortinbras, smaller than Farn Junction but fairly well-traveled nonetheless since it is the the gateway to all the smaller villages that lie above the Minochian snowline to the west. Fenris Pass (unmarked on the map) is only a few days' march west (and straight uphill) from Fortinbras, and those snowbound villages (like Crystal Lake and Snowdrift, unmarked on the map) lie in the snowy mountain reaches beyond. 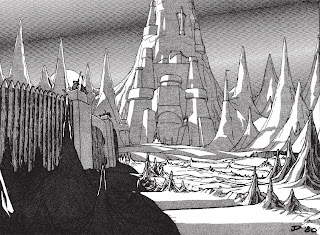 The Enchanters' Guild
The sole Enchanters' Guild in the Lands of Ara is located on a remote mountainside in central Minoch.  The Enchanters put their Guildhall and workshops there in part because (as they claim) the weird energy of the Minochian Mountains aids them in their arcane work.  Minoch is also a somewhat convenient location between the dwarven iron-smiths of the eastern mountains and the markets and shipping ports of Kaladar, Blint, and Noffel.  The Enchanters' Guildhall and workshops do wholesale business only -- PCs wanting to purchase or custom-order magical items must deal with retail vendors in Kaladar and other large Arandish cities and towns.