This session picked up seconds after the last one ended, at about 6am on Day 73 of the party's Arandish adventures.

The main aim of this session was to withdraw safely from Level Four of Stonehell, where the group had just vanquished the horde of vicious rust-colored rock trolls that had been keeping Zappo prisoner (presumably for future eating). After stashing what treasure they could on their persons and in the group's Bag of Holding -- and having to leave 8,000cp behind in the troll's secret chamber due to encumbrance limits -- the group briefly debated setting the Black Oil pools on this level afire. Dak seemed in favor of such a move, and Vivuli echoed his support, but Hazel questioned the idea, wondering if there might be far-reaching consequences that would be more damaging to the dungeon or to the party than they would to the Hobgoblins who had been (until lately) harvesting the oil. So the party opted against this strategy, and moved out of the rock trolls' den, through the caverns toward the elevator up to level two.

But their way back was not unobstructed. Just outside the rock troll lair, the party encountered a group of five albino apes, who, upon seeing the party, began beating their chests and moving forward aggressively. With Yor dead and many other party members seriously wounded from the rock troll fracas, the PCs opted to retreat submissively to the north, allowing the apes to believe they had successfully defended their territory. This strategem worked: the apes beat their chests a few more times and let the party go.

The PCs next crossed through the northern chamber with the water pool in it, only to find another group of dungeon delvers entering the same cavern simultaneously from the northwest. The other party's point man, a rodian, called out "Who goes there?" Vivuli answered that they were another group of adventurers looking to get out of Stonehell. Hazel also spoke up, saying that the PCs had no ill intentions toward the newcomers.

The other party -- which consisted of seven adventurers calling themselves "Atavar's Red Rogues" -- responded that they had just been fighting some gargoyles off to the west, but were now looking around for easier prey. Our party offered to direct them to the albino apes. The deal was brokered.

On the way south to the ape lair (which lay along the alternative route back to the elevator room), Dak offered Bart, the other party's dwarf, some dwarven whiskey; Bart politely declined. It was then that our PCs noticed that every member of that other party -- two human warriors (including party leader Atavar), a Mizarian barbarian, Bart the Dwarf, the rodian scout, a wizardy type, and a mysterious individual in a concealing yet simple brown robe -- wore the holy symbol of a local Lawful sect. In other words, Bart the dwarf refused Dak's alcohol offer because Atavar's Red Rogues were teetotalers to a man.

Hazel pressed the Red Rogues for information and rumors about the whereabouts of the still-missing Sir Boren of Achelon, and learned that they had heard he'd been killed.

Vivuli attempted to pick the mysterious brown-cloaked fellow's pockets, but came up with nothing. Vivuli did notice, however, that "browncloak" smelled of tree sap and kept not gold coins but rather herbs or plant material in his belt pouch.

After parting ways with the NPCs, the PCs made the elevator and, after a short skirmish with three giant centipedes on the first level of the dungeon, made it out of Stonehell. They headed down the mountain to where they had stashed their horses and wagon, only to find that the wagon and two of their four horses had been buried by a landslide. Hazel used a potion of plant control to manipulate nearby vines into partially digging out the wagon; the PCs were able to finish the job in fifty minutes total. Luckily the wagon was more or less undamaged and therefore road-worthy.

The party encountered one more natural event on their way back to Fortinbras: a steam geyser erupted near the roadside, inflicting heat damage on point man Dak. After that, however, it was smooth travel to Fortinbras, where the group arrived in the late evening (roughly 11pm) on Day 73 of their Arandish adventures.

Father Ouzo of the Brothers of Carcoon, still in town for the ongoing investigation into Baron Kaminster's death by exsanguination, was roused from bed and paid a 2,500gp donation to raise Yor from the dead. The group then retired to their rented home in southwestern Fortinbras, offering the shell-shocked wizard Zappo lodging there as well.

Upon the group's return to town, Gorgo the dwarf, Innominus' follower, decided to pledge himself to the party for good, becoming the cleric's Loyal Follower. Meanwhile, the party's other dwarf retainer, Hoark, decided he'd had enough of this kind of danger, and quit the party's service.

The next day, Hazel began asking around for the nearest spell library, and learned from local Fortinbras sorecerer Clarko that the nearest bona fide Council Spellcaster Library was three days north in Farn Junction. Hazel made plans to head up there sometime during the two-week window of Yor's recovery from the debilitating effects of raise dead.

Meanwhile, the PCs hired a bookbinding specialist to dry out and partially restore the waterlogged spell book that Innominus found in the stalagmite chamber the morning before. The bookbinder was able, over the course of five days' work, to dry out the pages so that they could be readable to an arcanist. Hazel then read those restored pages and found that they contained three somewhat high-level spells: Dimension Door, Telekinesis, and Project Image. Hazel was not high level enough to cast such spells yet,but was happy to have them for her own spell book. The bookbinder warned that due to the excessive water damage to the book over time, there was a chance that the wording of those spells had been altered or obfuscated.

The last key event of the session -- while various PCs went around town buying new weapons and minor magic items from vendors, and Vivuli went on a profitable pickpocketing spree -- occurred when Innominus visited the local temple of the Brothers of Carcoon to see if they had retained any of the late Baron Kaminster's clothing or possessions. Indeed, the clerics had the baron's death shroud on display in their main hall, so that local citizens could come and pay their respects to their departed leader. Innominus cast Tale of Death and touched the shroud, and recieved the impression of a dark, cloaked figure approaching the Baron in his sleep and sucking his blood like a vampire. However, although the Tale of Death spell is technically supposed to reveal all the details of the circumstances of the target's death, in this case Innominus could sense that some kind of powerful dark magic was blocking the spell's ability to reveal the identity of the killer. All the Cleric of Endra could glean was that Kaminster knew his killer personally.

And that is more or lees where the session ended. 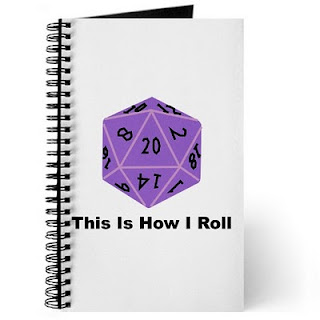 My new DM's notebook from Cafe Press.
DM Notes and Reflections
Whereas last session I couldn't roll a Wandering Monster Encounter to save my life, this time -- when the party was pretty much beat to shit and in no mood to fight -- I rolled three or four in a row! Such can be the fickleness of the dice. But I really enjoy succumbing to the old-school principle of letting the dice fall where they may, and I showed no mercy on that count. The PCs were quite lucky that I rolled a neutral reaction roll for those five white apes, and that I came up with two "Natural Disasters" in a row once they were out in the Minochian wilderness (because I can tell you, there are some deadly-ass creatures on my new and improved Minochian Mountains d30 Encounter Table!).