This is, in part, why I am immensely appreciative of James Raggi's discussion of alignment in his LotFP Grindhouse rules, about which I have mused at length before. The main idea is that Law and Chaos are palpable cosmic forces affecting the game-world, not just moral abstractions. So almost everybody in the human and demi-human species are neutral. Demons and the undead are aligned with Chaos, as are those who meddle in the arcane arts (which could simply be called "chaotic arts"). All clerics, unless they serve demons or chaotic demigods, are aligned with Law.

In some ways, this Law/Chaos business all ties back to the presumption of a multi-dimensional universe and the possibility for inter-dimensional travel: Law is what "naturally" occurs in one's home dimension, including its "indigenous" gods, and Chaos always comes from without, crossing into a foreign dimension via the energies of Chaos.

Again, I did not really make this up on my own, although it makes a lot of sense to me. I am once again indebted to Mr. Raggi, who succinctly describes arcane power thus:

"Magic fundamentally works by ripping a hole in the fabric of space and time and pulling out energy that interacts with and warps our reality. Various mages have managed to consistently capture specific energy in exact amounts to produce replicable results. Spells.

"The Summon spell opens the rift between the worlds a little bit more and forces an inhabitant into our world to do the Magic-User's bidding. What exactly comes through the tear, and whether or not it will do what the summoner wishes, are unpredictable."

[from the Summon spell description on Grindhouse Rules and Magic pg. 142]

This description fits perfectly with the core assumptions about how magic works in Ara. We have always included summoners as part of the Lands of Ara setting, and acknowledged in our own original writeup how dangerous Summoning could and should be. Summoning is a major part of what attracts demons -- i.e., Evil Gods -- to Ara in the first place. That is why it is technically an outlawed Art in the Lands of Ara now.

Yet Summoning surely still persists. Hell, the PCs in my current campaign are hot on the trail of some demonic entities that seem to have access to Summoner-created dimensional gates of some kind!

On a practical note, I wonder if I should technically make Raggi's Summon spell available in the Lands of Ara setting? Seems logical. . . 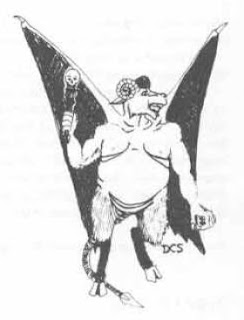