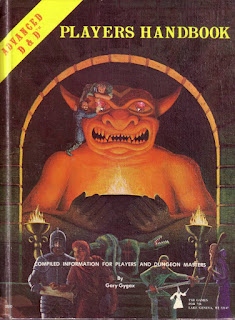 ckutalik over at Hill Cantons recently made some really smart observations about the implied Domain Game rules to be culled from the class descriptions in the AD&D Player's Handbook, including:

Only clerics, fighters, and magic-users are able to exert political authority enough to be able to squeeze income out of a local population. Furthermore they collect this revenue in varying amounts implying that the classes have different spheres of activity in the realm that [they] can control.

I find this post interesting and timely because in my current Lands of Ara campaign, many party members are creeping up toward levels 6 and 7, i.e., they are approaching name level. Innominus of Endra is the closest -- he just reached Cleric level 7 a few sessions ago. Then, just two sessions after that, the priest of Endra was granted sufficient land and funds with which to begin construction of a Temple to his deity in south Minoch.*

Discussing the role of clerics in domain-level play, ckutalik tells us that the Players Handbook says:

At 8th level [clerics] must build “a place of worship, a building of not less than 2,000 square feet in floor area with an altar, shrine, chapel, etc” to attract followers. At 9th level to rule they have the: “option of constructing a religious stronghold. This fortified place must contain a large temple, cathedral, or church of not less than 2500 square feet on the ground floor. It can be a castle, a monastery, an abbey or the like. It must be dedicated to the cleric's deity (or deities). The cost of construction will be only one-half the usual for such a place because of religious help.”

So in terms of the proto-domain game in my current campaign, Innominus is seemingly right on target, possibly even a bit ahead of the curve.

Okay, that covers our cleric. As for magic-users, Hazel (currently MU-4) has announced her extended hiatus from the campaign, so Vivuli is our only contender in this area, and my perception is that he considers himself an assassin first, and an arcanist second. Of domain-level assassins ckutalik writes that:

Like thieves, [assassins] cannot build strongholds but can build guild headquarters when they reach 13th level and defeat the sitting guildmaster “the headquarters...is always within a large town or big city...It is typically a warehouse or other nondescript structure, with safeguards and traps added.”

As [assassins] reach name level they must fight and defeat increasingly smaller circles of high-level characters (and presumably must be fielding the same from NPCs and other PCs) culminating in a single character of the highest level.

If Vivuli decides to foreground his wizardly role more so, he may decide to build a wizard's tower and take a more active role in local/regional rule, but I suspect that his player's proclivities -- and his multi-classing as an assassin -- will prevent this.

Of dwarves we learn that:

Level-caps make [the domain game] a humanocentric part of play for PCs. Only Dwarves with 18 STR [. . .] can become name-level fighters. [. . .] So ruling is really left as far as PCs go to humans.

Obviously, these restrictions do not really apply to my Labyrinth Lord campaign, in which we are using the Dwarf race-as-class. In the LL ruleset, dwarves can reach level 12, and are permitted to create a dwarven stronghold starting at level 9 -- see Labyrinth Lord p. 10.

Furthermore, campaign-setting-wise, the Lands of Ara are a bit less human-o-centric than standard AD&D, at least as things are unfolding in the current campaign. Humans still hold the vast majority of power positions, but our own campaign has seen Yor the Dwarf ascend to a position of considerable political influence in Minoch. This makes sense: dwarves are by far the most numerous and economically influential of the Arandish demi-human races, and Yor is rising to power in a region heavily populated by dwarves -- dwarves who are beginning to act on their desire to challenge the dominant human power structure.

Anyway, I will look forward to more of ckutalik's ruminations on the domain game as my PCs move inexorably toward their own version of it.