Session 54: Burn it to the Ground

This session began right where the last one left off, with the party standing over the recently-turned corpse of Grand Vizier Krock, which was lying on the large bed in the Prince's suite of the country manor outside Fortinbras. It was late morning of Day 176 of the party's Arandish adventures.

The PCs moved back down the westward hallway of the manor's second floor to search the rooms along both sides. Using his x-ray vision and working his way westward, Vivuli saw nothing in the first two rooms, but behind the next two doors, he learned that there were a great many undead beings gathered here: about six lich-wights (like those vanquished in the bedchamber last session) in the north room, and nearly a dozen more of them in the southern room. Upon such close inspection, both these doors revealed the foul, pungent reek of ancient undeath emanating from between the door-cracks. 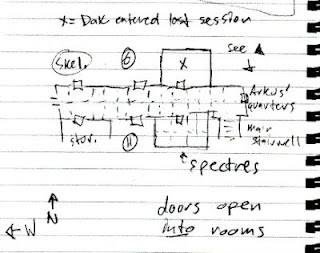 Map of the western half of the country manor's second floor.

Further west, at the end of the long hallway, the two westernmost doors concealed yet still more undead (and undead-related) horrors: the north room housed a skeleton warrior and its five skeleton attendants, while the south room, a former storage area, was wall-to-wall with the (mundane) rotting corpses of what appeared to be the Prince's former country house staff and soldiers.

INNOMINUS: Why is it again that we don't want to burn this place to the ground?

Calling upon benevolent Endra, Innominus invoked a divine wall of law, placing it east of the middle set of doors, thereby blocking off the hall (and staircase) to the east. Vivuli then snuck back down to the westernmost northern door and quietly used his lockpicking ability to lock the door from the outside. He succeeded.

Next Viv moved to the middle set of doors and threw them both open, and his compatriots started hucking flasks of holy water into both rooms. The lich-wights within charged out into the hallway to attack the party. As Innominus implored Endra to help him turn these abominable things (he rolled low and turned only two lich-wights the first round), the party beat a fighting retreat back past the wall of law, which the wights could not pass. 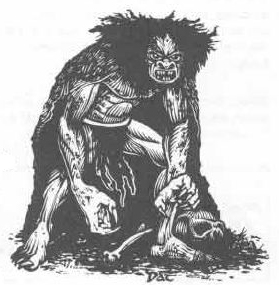 Second round, the wights pulled out crossbows to shoot through the wall of law at the party, and Innominus turned undead again, repelling one additional wight.

Third round (in which the DM won d6 initiative in a 6 vs. 5 contest), four as-yet-undetected spectres flew out of the easternmost door on the south side of the hallway, flanking the party! The spectres attacked the party members but all of them missed. In their initiative round, Innominus acted quickly, casting protection from evil 10' radius and instructing his fellows to stick close as they all retreated down the stairs and out the front door of the manor house. The malicious spectres followed them all the way down and outside, cursing and hissing as the protected party, but stymied.

Outside -- it was still late morning -- it had begun to snow vigorously. Prince Arkus and his troops surrounded the entire property just outside the main gate, accompanied by Father Azamondius of the Kaladarian Temple of Carcoon. Innominus called upon Azamondius to help him turn the four spectres; the clerics turned one each, then the party fought the remaining two by less divine means, keeping them busy until Azamondius could finally successfully turn them a couple rounds later.

Once the vile spectres were dispatched, Innominus cast two more walls of law over the manor house, effectively sealing it off, trapping whatever undead were within inside.

INNOMINUS: I'm a big fan of burning the entire place to the ground.

The Prince and the party agreed that the manor house seemed a lost cause, overrun as it was with lich-wights, skeletons, and spectres, so they started piling flammable wood and other tinder around the outside walls. Vivuli then shot two fire gems into the place: one upstairs, one downstairs. White-hot explosions racked the manor, and then it caught fire and burned down completely over the next several hours. The assembled party and forces of the Prince heard the terrible hissing of multitudes of wights as they perished in the hellishly hot flames.

By late afternoon, in lessening snowfall, once the ashes of the destroyed manor house cooled down enough to walk around in, Dak, Viv, Innominus, and Father Azamondius searched the rubble, especially around the area where the central staircase -- and secret entrance to the cellar level -- had been. Dak estimated that the central stairs down would take at least five hours of labor to excavate of rubble and ash. Innominus instead suggested that they leave the collapsed ruins be, proposing to cause a divinely inspired earthquake to further collapse the cellar and lower levels below. The party and the Prince agreed to this plan.

And so Innominus read from a scroll, called upon Endra once again, this time to cause the third earthquake to wrack the Rogaland Valley in as many days. This one was centered upon a point 120' below the ground level of the country manor.

The manor house's smoldering ruins rumbled and shook, and a huge black cloud of dust and ash, smelling of death, billowed up into the dusky winter sky. After awhile it settled, as did the earth, and the country manor truly was no more.

Innominus then turned to Prince Arkus of Minoch and requested an immediate land grant, so that he might build a Temple of Endra here near the site of the destroyed country manor. One of the Endran Temple's purposes would be to house a group of holy warrior clerics charged with watching the site (and its presumed gate to hell) for all time. The Prince agreed.

The Prince also bestowed upon Yor the title of Baron of Rogaland, thereby installing him as Kaminster's replacement and making him the man in charge of southern Minoch. Yor accepted the barony, and that evening, the Prince took his party northward, to return to his ancestral home beyond the dead, demon-held city of Farn Junction.


"This is like the Afghanistan of the Lands of Ara."
--Innominus of Endra, referring to Minoch

--
* In case you missed it, Hazel's player is on long-term hiatus from the campaign as of last session. Uncle Junkal's player also missed this particular session, I can't recall why.