Games to Play Before I Croak

A long time ago Beedo posted about the D&D modules he'd like to play before he "finally hangs up the dice for good." My own D&D "bucket list" includes not only modules but also some OSR-ish games I would like to play before my final days. To wit (and in no particular order): 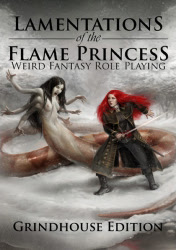 - LotFP Grindhouse Edition: I hope I get to referee or play in an LotFP Grindhouse campaign at some point. Raggi has written a really clear and functional rules set and has added some inventive twists, in particular his Specialist Class, that I would love to road-test. Maybe Spawn of Endra could be persuaded to run LotFP one day?

- The Grinding Gear: Of all the Raggi modules I've seen, this is the one I most want to run a PC group through [see my review here]. Maybe as a one-off, or as a tournament module at some future convention. Maybe it could be done over two consecutive convention sessions.

- The Isle of Dread: Gods, this is the "classic" module I most want to run but never have. That dino on the cover has always appealed to me, as does the module's open-ended "sandboxy" nature. Viva Moldvay! 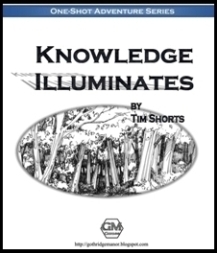 - Knowledge Illuminates: A strong module with which to kick off a campaign and/or unite a band of adventurers -- perhaps this may be run in my public gaming group in the coming year, or perhaps to start my next Arandish campaign, if the current one ever reaches an ending point. Tim Shorts' fresh, generative module is a terrific wilderness campaign-starter which I've reviewed here.

- Mutant Future: To be fair, I've played this one: I entered the OSR via Mutant Future, playing in Carl's awesome campaign which eventually wrapped up. One day I would like to run a Mutant Future campaign, or at least a few sessions of the game, to see how I like it. I have only played, but have never run, a post-apocalyptic game (outside of Shadowrun, a game I have run in the past but have little interest in playing again), and Mutant Future would probably be my system of choice, unless I get more serious about learning Twilight 2000.

- James Bond 007 or Top Secret: One day I will get around to running a "contemporary" espionage RPG, at least as a one-off or short "single mission" campaign, and it will likely be using one of these two systems. 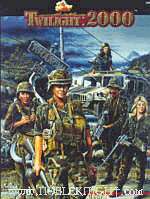 "Hey Carter, can't we be friends?"