As I touched upon in a previous post, I like my campaign's magic items to have specific histories and to be somewhat unique.  I do not want a ton of +1 through +3 weapons in every PC's hand; I want to see a very few high-powered, unique, artifact-type weapons, maybe an occasional +2 sword bought at great expense from a Kaladarian merchant, and everybody else makes do with mundane iron weapons or new steel weapons when/if they can afford them.  In short, magic items are fairly rare and very expensive in Ara.  Dwarven steel weapons and armor are preferred and more widely available.

Don't get me wrong; in Ara there are indeed enchanters and wizards out there creating all kinds of bizarre and unique magical weapons, artifacts, and oddities.  But PCs don't get their hands on them all that often, and when they do, I prefer them to find unusual or unique magic items, or else fairly low-powered ones, rather than lots of randomly rolled magic weapons.  I am quite careful about how, when, and especially how often I place magic items amongst treasure hordes. 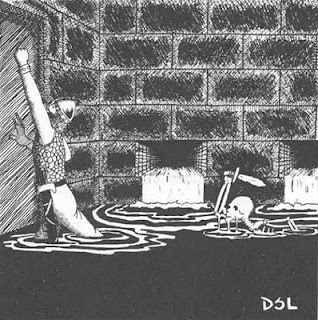 The Legend and Whereabouts of the
Crimson Blades of Ara

The Crimson Blades are the most famous magic artifact weapons in the Lands of Ara.  As was related in this post, in old Calendar year 2288, the creator-sorceress Awra sailed from Noffel on the vessel Tarandis and ended up shipwrecked (in 2289) on the island of Suhl.  Most of the Noffellian human sailors on that voyage were transmogrified by Awra into what we now call rodians (or sometimes Suhlians).  However, a few Noffellian warriors, led by a man named Rogath, resisted being transformed and, after making landfall on Suhl, demanded to leave the island in an attempt to return to the Arandish mainland.  As these Noffellians set sail in two ship's boats from the Tarandis, Awra reportedly proclaimed:

"Go forth now, thou thirteen unbelievers, to meet your destiny!  I now lay an enchantment upon these boats that they may see you swiftly whither thou will.  And I lay upon you a curse of forgetfulness, so that should you reach the mainland, not one among you will remember this place or this voyage.  But your blades will bear the mark of these events forever."

The journal of the sea captain who commanded the Tarandis reports that dark thunderheads swept the sky surrounding the rocky shoreline from which Awra pronounced this curse, and as the thirteen Noffellians began to row out to sea, each of their thirteen swords glowed a dull, deep shade of crimson.

Ever since, these legendary thirteen Crimson Blades have been the most sought-after magic artifacts throughout the Lands of Ara.  Only three have ever been found, and in the present day, the whereabouts of only two Crimson Blades are known.

The first Crimson Blade ever found, Gathar, resides in the the vaults of the King of Noffel in the Royal Palace at Highgate.  This beloved Crimson Blade, once wielded by the legendary Noffellian Sword-Cleric Silverblade, is brought forth and shown to the Noffellian public by the king himself during the most important Noffellian state functions, such as a new king's coronation or a formal declaration of war.  Silverblade (called Silverblade the Stout-Hearted by most Noffellians) successfully recovered Gathar during his family sword quest at the age of 18 in New (or Arlonian) calendar year 682.  True to Noffellian custom surrounding sword quests, Silverblade never revealed exactly where or how he found the sword which would come to be known as The Gleaming Sword of Noffel.  But upon his death in 719, Gathar passed into the hands of the Noffellian monarchy, where it has remained in safe-keeping ever since.

The second known Crimson Blade is Balak, the Life-Stealer, kept by Lar, the Duke of Anorak, in his keep in the northern reaches of the Western Lands.  Balak is (rightfully) dreaded by most Arandish humans and demi-humans due to its reputation as a chaotic evil blade.  Since its discovery in Arlonian year 776, it is known to have driven three of its wielders insane, and most suspect it did the same to its original owner.  This blade played a key role in the restoration of Kaladar as a Free City after the Achelonian Occupation of 889-95, and became the possession of the Achelonian Queen as a condition of the treaty that ended that occupation.  Lar keeps the blade sealed underground in a magically guarded vault at the behest of the current Queen of Achelon, with whom he is close.  Lar and his minions and troops will fight to the death to keep the blade locked away, and will be assisted by Achelonian troops from Tradefair within four days of any serious attempt to take Balak.  So far, since Lar took possession of the accursed weapon in Arlonian year 1269, no one has even attempted to liberate the chaotic blade from his keeping.

The third Crimson Blade ever recovered was Hallas, the Dancing Blade, found (and subsequently wielded) by Silverblade's great-great-nephew, Grimmtouth the Gallant, in Arlonian year 802.  Hallas was lost at the time of Grimmtouth's disappearance (and presumed death) in the Gray Mountains in 813.

In general, it is not precisely known whether the Crimson Blades are blessed, cursed, whether they prefer Noffellian wielders, nor what their specific powers might be.  They are only known to be greatly powerful, and sought after by all.  Thousands of legends and rumors exist about the thirteen Crimson Blades -- they are viewed with reverence and fear throughout Ara, especially by Noffellians.  As in most things, Sawith, the Chief Scribe of Kaladar, is in possession of the most complete archive of Crimson Blades-related historical materials, but there are also many other reputable Crimson Blades lore-masters, including Lar, Duke of Anorak, Herbald, Duke of Orr (Western Lands), and a notable Delzarian folklorist named Zalbheeth.

I personally suspect that each of the thirteen Crimson Blades have taken on something of the personalities of their original owners, all of whom had been through plague and near-death at sea, not to mention witnessing a mass transmogrification, before fleeing Suhl in fear for their lives and disappearing from history.  The thirteen Crimson Blades are all sapient (see LL p. 121) and have a wide range -- from purely good to mixed-up insane to disturbingly fucked-up -- personalities.  None of the original owners -- their bodies nor conclusive proof of their deaths -- has ever been found.