Lost Expedition to the Barrier Caverns of Fretsno-jcanth

For this year’s annual Christmas migration to the ancestral abode in Fresno, I had something to look forward to. I had visions not of mere sugar-plums dancing in my head, but of finding THE BOX with all my old RPG stuff in it, and scoring a real old-school haul. What treasures did I expect to find? Well, for sure there would be my 1e DMG and PHB, a bag of dice of varying quality, and I figured there would be some classic modules. The three I was really hoping to recover were S3 Expedition to the Barrier Peaks (mostly for the artwork, honestly), S4 Lost Caverns of Tsojcanth (for all the cool magic items and new monsters), and B2 Keep on the Borderlands (because it’s B2!). Well, I found A BOX, but not THE BOX, which now I suspect may no longer exist. Anyway, there was some loot.

Yes the PHB and DMG were there, as well as my original copies of Moldvay Basic and Cook Expert, which was unexpectedly cool. Of moderate coolness were two slightly mangled sets of Steve Jackson’s Cardboard Heroes: the Brigands, Orcs, and Goblins set and the Animals set. 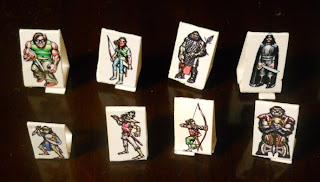 I take that back, "moderately cool" is unfair. Cardboard Heroes was a fucking awesome product, fairly cheap (<$5 a set I think?) and a really cool substitute for lead miniatures, which I never devoted much time or money to. Plus these will come in handy with Innominus soon to conjure up a Dangerous Bobcat familiar (thanks to Carter allowing the use of all of Bat's Ancient Vaults Spells in the Ara campaign), which when Animal Growth gets cast is going to take on Mountain Lion proportions ... CLAW/CLAW/BITE! Too awesome! But more on that some other time.

The rest of the box contents seemed to date to a later period of gaming, which included Star Frontiers (the original rules, Alpha Dawn expansion, and Zebulon’s Guide to the Galaxy, which is a pretty cool book) and Marvel Superheroes, which would have been early high school era stuff (the end of the 1980s). Ah, yes, and Palladium’s TMNT. Scanning through that I remembered that TMNT was cool before they cartoonified the franchise. Balls. That book also has some great artwork.

But none of the big 3 modules were there, much to my dismay. Nor were there some others like X1 Isle of Dread, X2 Castle Amber (? did I own that or not...), or X5 Temple of Death. Now, I may later post something on “Nostalgia”, which I have some issues about with respect to Old School gaming, but let me make clear that I wasn’t trying to recover my past or seek refuge in childhood memories or any of that crap. I just wanted to get my cool stuff back, now that I’m gaming again and have an adult mind to turn towards mechanics, themes and ideas I really couldn’t take in back when I was 10-12 years old. But I did find a bit of a B/X treat. In addition to the rulebooks, there was B4 The Lost City, which I think I got for my birthday towards the end of my D&D era, and never played. I think by that time I was still laboring under the delusion that my friends and I had graduated beyond Basic and Expert to Advanced, and so playing a Basic Module was for little babies that couldn’t deal with hardcover books. Now having got back into the Old School via Lab Lord and reading all of these blogs, I understand that B/X is an entirely separate system to AD&D (this is what I mean by turning an adult mind to this stuff and now actually getting it). And furthermore, as I looked through the DMG for the first time in decades, I realize that we hardly ever used that book except for cooler spells and treasures. We thought we were playing AD&D, but were actually playing B/X with PHB classes and hit points – a hybrid I now recognize to be quite similar to the LL Advanced Edition Companion.

So I looked at those books and the module with fresh eyes. First, the books have been through hell: 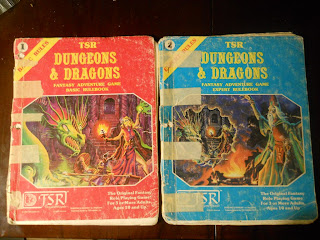 I bought these from a friend of mine in 5th grade, who had savagely cut them down spine so they could go in a 3-ring binder, and then taped the covers together when he gave them to me. I apparently then stapled the pages back together with all the staples I could find. I should have just put them in a binder. You know, 5th graders are just fucking stupid. They should never be allowed to vote or given drivers licenses. You can quote me on that. Anyway, looking at B4 now I see that this is a pretty cool module, set in the middle of a desert, so it can be stuck into just about any game universe, and has enough complexity with the factions and the history of the Lost City to be fairly rich even though it looks to be specifically designed as an intro modules for both players and DMs. Probably this is because Moldvay wrote with that in mind? The handy Fast Packs and pre-gen character stats at the back of the module, and the sort of one-off format seems designed for ready play, in a way that B2 is not. I guess it’s seems like B2 would be more difficult for a new DM to deal with, but since I haven’t read it for ages maybe I’m off the mark. The other cool thing about B4 is that it can be expanded to higher level play, so the transition to Expert rules can be made if the players want to delve deeper in the pyramid. Good stuff, lots of cool ideas. Once again I see that Basic doesn’t have to mean bland.

Well, that’s it for now. I’ll have some obligatory notes on what is scrawled in these books in a later post. The other thing I hoped to do was visit the only cool thing left in Fresno (since I no longer live there), the Forestiere Underground Gardens which was highlighted over on The Lost Continent a while back. Unfortunately the weather did not cooperate. Anyone traveling through the valley on Hwy 99 should stop off and check it out, or I will destroy you.