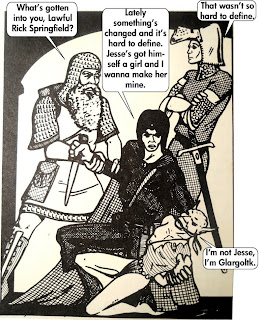 Once spoked Ein Spawne:
In an earlier post concerning the recovery of some Old School goods, I promised a post about the scrawlings found in my Moldvay/Cook B/X rulebooks, as well as my 1e DMG and PHB, or whatever was worth mentioning. It seems traditional to do this on Old School blogs, and occasionally yields some important insights (e.g., who found that Basic boxset of character sheets with Mr. T as a PC a while back?). And sometimes it does not. Well, we’re all dice-throwers by nature, so we’ll take our chances on this post, right?

There’s probably more to say about the desperate condition of these books than what was scrawled in them. But either way, I find no marginal inscriptions in the Moldvay Basic book. Cook Expert is a different story, with some notes made by the previous 5th grade owner of these books (who has since gone on to become a successful surgeon, not that I endorse that sort of thing). We’ll call him El, to protect his identity.

p. X6: The Jeff Dee pic of a human saying some words to a male halfling and his shocked female companion ... there’s an implied dialog line, never realized. Please feel free to supply your own one-liner in the comments! 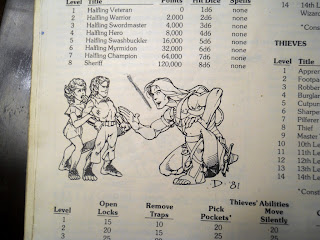 p. X9: Cost of Weapons and Equipment: Apparently El enumerated every item in that page (minus Water Transport) from 1 to 61. That is, Equipment and Land Transport is 1-33: ‘Backpack’ through ‘Wagon (4 wheels)’, and then ‘Weapons’ and ‘Armor’ cover 34-61. Strangely it seems that Chain Mail and Leather Armor are left off. But El added ‘Helmets’ sometime later as #62, which would give -1 AC against ‘head attacks’, and cost 10 gp.

To this list I added “Stars” (shuriken), for 3gp each, and “Nunchuka”, (rather than ‘nunchaku’), which sold for 15gp in my Expert world. I also added an asterisk to show they could be used by Clerics. 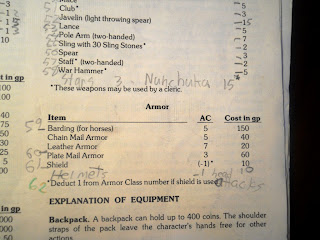 On p. X25 on the table of Variable Weapon Damage, El changed Lance from 1d6 to 1d12. This is a nice touch, both because a Willingham jousting image appears on the opposing column, and because 25 years later we’re still griping about what the hell the d12 is for. 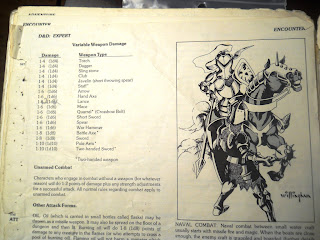 The last set of marginalia were placed on my 1e DMG, probably during a high-school revisit. It looks like I tried to cover over the captive woman’s hair to make it more modern or something (this doesn’t come out so well on the photo). 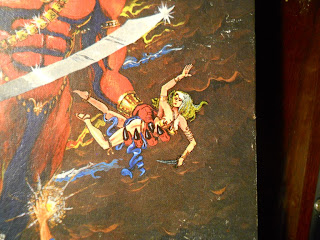 I have a pretty keen eye for my own fetishes, and the motivation for this escapes me. Maybe a reference to Bridgett Nielsen in Rocky IV? Note also I blanked out the useless knife. Further inspection tells us that the Sutherland cover “shows an encounter between three adventurers and an efreet on the Elemental Plane of Fire.” (DMG, p.2). Was the female adventurer wearing that Princess-Leia-in-the-thrall-of-Jabba-the-Hutt get-up when the session started or are we missing part of the story? All told, with an unarmed and unarmored magic user (casting Light apparently) and a frightened fighter in tow, this party has clearly stepped into the Elemental Plane of Whoop-Ass. But we’re still rooting for them, am I wrong?

And finally, I see that my high-school era self had made a sarcastic, but oddly insightful, evaluation of the DMG after years away from it. Added to the list in “Herein you will find:” are “Funky Pictures”, “Big Words (necessitate)”, “And stuff you’ll never use ... Converting AD&D to Boot Hill!”. 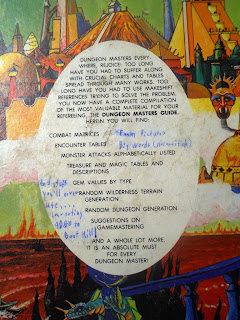 That may be a bit harsh, and if you had awesome inter-dimensional campaigns between Greyhawk and Deadwood back in the day, jolly good for you. I never saw the appeal of Boot Hill, personally. But it’s interesting to me that as a teenager I was able to pick up on and be critical of Gygax’s verbosity (some folks ascribe this to the influence of Jack Vance, I’ve read?). And the art is mostly very good; I’m not sure what I meant by “funky”, but images that seem sub-par to me now include the panels of the adventure-in-progress from p.170-173, and back-slapping carouser with Thunderbirds-puppet body proportions on p.101. I might have meant Will McLean’s cartoony asides, but now I think that without them there to take the piss out of Gygax and D&D in general, the DMG would totally collapse under it’s own immense ponderositude (as EGG might have put it).

Anyway, the sentiment expressed on the back cover does reinforce what I mentioned in a previous post, that even though we thought we were playing AD&D, we mostly were just playing B/X with PHB classes, hit dice and spells. We rarely actually used the DMG itself because it was so dense, and despite saying in the first sentence of the intro that “The format of this book is simple and straightforward” it still doesn’t seem so to me. But, it IS full of awesomeness. Just not easily gotten awesomeness. Just the other day we used it find out how much a ballista costs so we could outfit our new War Wagon! Rock on.