Last Monday's session (played 1/3/11) was one of the most exciting and action-packed ones we've had in the Arandish Labyrinth Lord campaign so far. The party -- Innominus (Clr-5), Uncle Junkal (Bard-4), Hazel (Ftr-4/MU-3), Dak (Dwarf-4) and Yor (Dwarf-4), plus NPC's Gorgo (Dwarf-3), Darvey (Dwarf-1), Garvey (Dwarf-1), and Marko (Thief-5) -- set off from Fortinbras toward Greystone Mountain, in the hope of finally rescuing Gark Steelsnout, a popular local dwarf adventurer, from Stonehell. A few sessions back the PCs learned that Gark was part of an adventuring party led by Sir Boren of Achelon that had entered Stonehell about four weeks ago and has not been heard from since. Knowing that Boren's group was going to Stonehell to investigate the Black Oil, our PCs felt that there was a high likelihood that Boren, Gark, et. al. had run afoul of the Skullface Occupational Army, a well-organized legion of hobgoblins harvesting said oil out of the megadungeon.

Having met with disastrous results -- pursuit by hobgoblin patrols and the eventual death of Innominus -- upon their prior frontal approach to Stonehell, the party knew they needed a new strategy this time. To that end, before leaving Fortinbras, Dak bought a map detailing the mountainous region around Stonehell, while other party members asked around town for rumors about other Stonehell entrances besides the well-known one inside the box canyon. They learned that:

(a) The Skullface Occupational Army (of hobgoblins) has supposedly burrowed a new access tunnel into the Stonehell Dungeon,

(b) There is another rumored entrance to Stonehell located inside the "Brigand Caves" over the ridgeline to the south of the box canyon, and

(c) Some adventurers have been known to pay a local Fortinbras wizard to teleport them into previously visited (familiar) locales inside Stonehell.

The party immediately dismissed ideas (a) and (c) as being not useful / too dangerous for them to do much with. They further deduced that the Brigand Caves must be the same caves they had poked around in two sessions ago, and that since these caves were currently infested with hobgoblins, that route would not necessarily make for easy egress into the dungeon either. Besides, Innominus felt some lingering uneasiness about traveling in the vicinity of the southern caves, since that is where he died at the hands (tentacles?) of an Advanced Otyugh last session.

So, using Dak's map to guide them, the party circled round to the west side of Greystone Mountain and ascended the peak from the back, far from the prying eyes of the encamped hobgoblin army. They encountered and quickly dispatched one small hobgoblin patrol on their way up, and soon found themselves crouched behind boulders at a point just above and to the west of the hobgoblin camp. It was late afternoon, almost dusk.

The PCs observed approximately fifty hobgoblins in the camp, going about their various militaristic tasks. They also espied a large, tipi-shaped tent at the near (west) end of the camp and a squat stone structure at the far (east) end that looked like it could be a stone giant dwelling.

Knowing that an outright frontal assault would not go well given the odds, the PCs hatched an ingenious scheme: Innominus and Hazel would sneak invisibly into the hobgoblin camp and use their respective Hold Person and Sleep spells to quickly neutralize a goodly number of the hobgoblins there. Then the rest of the party would charge in and help them kill the remaining hobgoblin soldiers by means of bold melee combat.

So Hazel cast invisibility on herself, Innominus wrapped up in the rock troll's invisibility cloak, and the two of them sneaked into the camp, heading straight into the tipi-like tent. Inside were five hobgoblins -- an especially brawny and well-decorated fellow with an eye patch whom the PCs took to be the camp leader, plus four high-ranking aides -- and two shackled prisoners: a dwarf and a half-orc. Both prisoners were beaten up rather badly and did not look like they had been fed recently nor well-cared for in general.

Hazel used her wand of paralyzation to instantly freeze the hobgoblin inhabitants of the tent, then she and Innominus administered coup de grace to the four aides, leaving the one-eyed General alive but paralyzed. Next, since Hazel's invisibility spell was nullified by her attacking the tent hobgoblins, the two PCs huddled together under the rock troll's cloak and crawled out into the middle of the encampment. Despite the fact that the cloak could not completely cover two humans of their size -- hence their ankles occasionally poked out visibly -- no hobgoblin spotted them and they crept to the exact center of the 270' long camp.

While Hazel and Innominus had been about their business inside the tent, a seven-hobgoblin patrol had decamped and headed down the northern canyon wall, thereby leaving a total of 36 hobgoblin soldiers inside the camp at this point (48 originally, -5 paralyzed in the tent, -7 in departing patrol = 36 left in camp).

Innominus cast Hold Person, then rolled his nightly d30 roll to see how many beings the spell would affect, rolling a 21. Of those 21, 5 hobgoblins made their save, but the cleric nevertheless succeeded in neutralizing 16 hobgoblins with one spell.

Hazel cast sleep, and also rolled her d30, getting a somewhat disappointing die roll result of 8. This was still enough to put 3 more hobgoblins out of the action.

Meanwhile, Dak, Yor, Uncle Junkal and Uncle Junkal's charmed rock troll all hustled down the slope toward the camp.

The remaining 17 hobgoblins leaped into combat readiness, but the PCs (thanks to Hazel's +2 DEX bonus) won initiative. Innominus Held one more key hobgoblin guard outside the tipi, and he and Hazel hastily retreated from the center of camp to the tipi entrance. Once there, Hazel whipped out the paralysis wand again and froze 10 more hobgoblins in their tracks. This left 8 combat-ready hobgoblins in the camp before the PC reinforcements even arrived. Of those 8, 4 were ordered down into the box canyon, presumably to alert other hobgoblin troops below of what was happening. The 4 remaining hobgoblin warriors advanced slowly toward the tipi, crossbows at the ready. They stopped just outside longbow range and started shooting their crossbows at Hazel and Innominus. They never hit.

The dwarves and bard arrived, Innominus cast Bless, and Yor, Innominus, Hazel, and the rock troll swiftly dispatched the remaining hobgoblins. Meanwhile Dak entered the tipi and freed the dwarf and half-orc prisoners. The party thereby succeeded in liberating Gark Steelsnout and his adventuring companion Korak from the clutches of the Skullface Liberation Army.

The session ended with the PCs gathering in the tipi and Uncle Junkal charming the eyepatched hobgoblin General. . .

Notes and Comments on the Session

What I liked best about this session is that it involved a wide array of adventuring tactics and some excellent use of party teamwork. To begin with, the PCs formulated a clearly stated goal -- to find and rescue Gark -- and, before leaving town, used rumor-gathering and town services (Dak visiting a local cartographer) to prepare them to conduct the mission intelligently. They knew from their prior visit that they couldn't simply charge into the box canyon and expect to survive against the hobgoblin patrols to gain access to Stonehell or assault the hobgoblin camp. So this time they outsmarted the hobgoblins by approaching from the one side the Skullface Army did not patrol so rigorously. 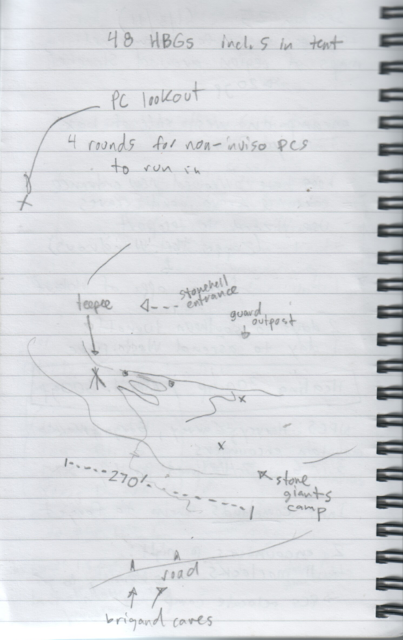 DM's sketched map of the Hobgoblin Encampment.
Then, in the raid itself, the PCs deployed their magic-wielding characters to soften the target -- a feat which succeeded spectacularly -- then brought in the heavy melee fighters like Yor, Dak and Uncle Junkal's charmed rock troll to clean up the remaining hobgoblin combatants. I did have a few unlucky rolls on my side of the screen, especially when Hazel and Innominus were sneaking out into the middle of camp under the one rock-troll-sized invisibility cloak -- I gave my hobgoblins many chances to spot the two PCs, which, due to poor rolling, they failed to do. Yet most of the PCs' triumphs were due to good planning and effective execution of their plans, which makes their victory feel well-deserved, even to me. They achieved their goal of finding Gark, with minimum danger to themselves. Smart play, and very satisfying to observe.