My journey to Toronto for OSRCon 2011 this past weekend was so action-packed, stimulating, and out-and-out fun that I hardly know where to begin.  Trying to capture the essence of the event in words will be challenging enough; to express the various ways it has impacted me personally is a whole other matter, and will no doubt spin out over the course of the coming year and the years to come. 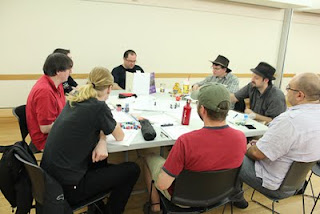 My Friday morning Labyrinth Lord game gets underway.
The first word that comes to mind as I reflect on my OSRCon experience is: magic.  Another way of putting it would be to use the word synergy.  Whatever the descriptor, there was a palpable enthusiasm and harmony and momentum in the air across both days of the two-day event.  I felt a relatively high degree of group cohesion amongst the attendees, and the vibe was overwhelmingly positive and fun-o-centric.  As Chris alludes to in his blog post, that gaming room got loud!  People really got into their games, gave it their all, and as a result a deliriously enjoyable time was had by everyone.

And while all the players and DM's and Guests of Honor "brought it" to the game tables and to the Saturday panel, surely Chris Cunnington's expert planning and orchestration of OSRCon was the pivotal factor in the Con's overall success.  Never have I attended an open-to-the-public group function of this particular size and scale that was so well organized and executed.   The facility was TERRIFIC, the fridge was always stocked with cold soda and water, there were some really classy prizes given away at the between-session raffles, and -- most amazingly -- Chris kept us all on schedule.  That's right: virtually every event started and ended exactly when it was supposed to.  That is something of a rarity for events like this, especially for one like OSRCon that is in its very first year of existence.  Chris clearly knows what he's doing, and it showed in the calm, gracious, and efficent way he brought OSRCon off this year. 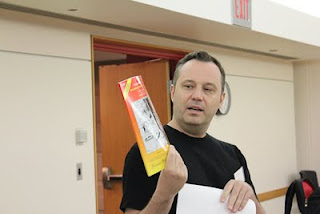 Chris Cunnington, OSRCon's fearless leader.
Deep gratitude is also owed to the Merril Collection of Science Fiction, Speculation, and Fantasy, the sponsors of OSRCon and co-providers (along with the Lillian H. Smith Library) of the fine facility in which the Con was held.

Deserving of a special shout-out is Kris Kobold, the very capable and engaging DM of the two contiguous Expedition to the Barrier Peaks sessions in which I played. The two things I'd like to say about Kris are:

(1) Yes, "Kobold" is indeed his REAL surname. No frikkin' joke. If that doesn't signify that Kris' best destiny lies with fantasy RPG'ing, I don't know what does.

(2) Kris is at the same time one of the most efficient and most playfully humorous DM's I've gamed with. He has a real sense of fun about him that draws players in and distinctly raises the level of engagement -- and, at times, hilarity -- at the table. And he really knows the AD&D rules, so game play at those sessions flowed fluidly and easily.

For me, those two Barrier Peaks sessions flew by really quickly and were quite eventful and action-packed. No dull moments there at all.  In short, I had a complete blast. 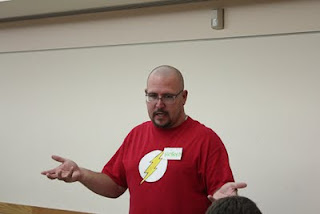 "Dammit! Why won't you guys enter the froghemoth's lair??" 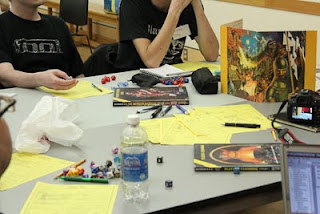 The view from my seat on Day One of Barrier Peaks. 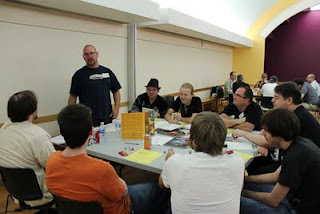 
There is so much more I could say, and indeed regular readers should expect to see more Tales from OSRCon pop up here over the next several days and weeks. For one, I want to post separately about how my own Labyrinth Lord sessions went. (In a nutshell: GREAT!!) Details will follow as soon as I re-gather my wits, calm down a little from the weekend's excitement, and gain some perspective from which to reflect more insightfully upon those sessions.
That said, I want extend a SPECIAL THANK-YOU to all the players who came to my Labyrinth Lord table and faced The Tower of Death over the course of those two days: Rene, Marc, Rob, Theo, JC, Steve, Greg, John, Gary, James, and Garfield.  You were all simply terrific, I had a great time playing with you and couldn't have done it without you!
Lastly, thanks to Marc for the lunches, the great talks, and for lending me a much-needed spare copy of the LL rules during my Saturday session; and to Theo for the KILLER DICE.  Great memories, guys. 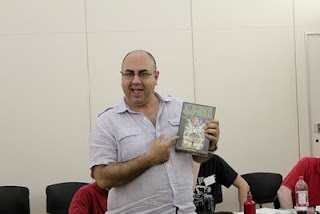 All photos by Garfield Noyahr.