From the kitchen of thoust Spawn of Endra:

I'm not much of an innovator in the Old School blogosphere, but I think I may have finally come up with something original*. I'm not a DM and I've never felt qualified to give a review of anything Old School, until now. I AM a proven Old School cook, so here's a review of a recent recipe for Gaming Grub posted by Mr. Digital Orc a few weeks back -- his Dad's Pepper Dish. I've recently moved to central Pennsylvania and Saturday evening I was bored and hungry, waiting for the Irenic apocalypse:
While looking for a recipe for ajvar I saw that I had bookmarked DO's recipe. I have been greatly impressed by the pickled banana peppers I get on subs around here, and so I'm on board to start working with these vegetables. And maybe Irene was coming inland and this would have be my last home-cooked meal for a while. Who knows?

The recipe is simple: 1/2lb bacon; 3lb red potatoes; 15-20 banana peppers; S&P to taste. That's it. Cook in phases in a covered skillet. Well, I looked at my skillet and could not see all this fitting in there, nor did I have a lid for it. So I went to the next biggest heavy implement: my Dutch Oven. Seriously. It took me a few hours to realize how weirdly appropriate this was. I started in simmering the bacon and then adding in the red potato wedges: 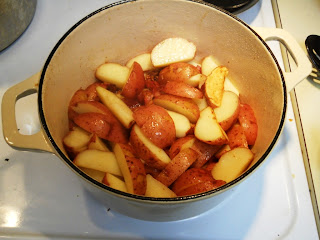 I strirred/tossed this every 5min or so to spread the browning love. While this was going on, I was dealing with the peppers. I used Hungarian wax peppers ... presumably the same thing? But DO's instructions were confusing:


Remove caps and seeds of banana peppers, cut into 2 inch rings, add to skillet, allow to cook for 15-25 minutes until banana peppers cook down.

Being the type that will always play the system as written before house-ruling it, I cut the peppers into 2"-long, er ... tubes? In the end, I don't think this matters, but removing the seeds and membranes (my habit, not strictly in the recipe) from these is a real pain in the ass. But eventually I prevailed: 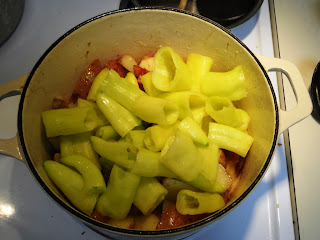 Very pretty. I let it cook away for about 15 minutes and then by that point there was a fair amount of browned bacon/potato residue on the bottom, so I pulled it off the stovetop and finished it in the oven at 350F for ~10 min to avoid a charred blackened mess. By the time I got to the peppers, all the stirring/tossing had pretty much gotten it to a chunky mash consistency. In the end, after adding some black pepper and 1-2 tsp of salt, I had a right mash if there ever was one: 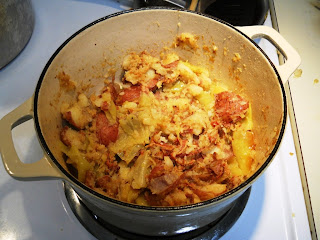 I'll admit, as this thing moved along I had some doubts. The recipe looked like it had some serious gaps, and the fact that it was turning into a hash/mash ... well, maybe that's right but who knows? DO doesn't say how it should look. Then I'm thinking, "If this sucks, what kind of an asshole am I to write a negative review of somebody's sketch of a favorite recipe on a blog about gaming? That's the worst possible Old School blogosphere asshole imaginable!" Indeed, such a creature will appear on the cover of Raggi's new Random Blogospheric Asshole Generator, due out this Fall from Goodman Games.

But all of this worry was for naught. I have no idea if this is the correct outcome (i.e., the hash format), but this dish was DELICIOUS. The bacon of course is going to be nice, but because of the potatoes it doesn't make the dish overly salty (you still need to add salt at the end). The bacon fat makes the potatoes creamy but not heavy, and the juices from the peppers permeate the dish and add a really nice noticeable but mild, clean heat to the dish. The tanginess of the peppers adds a distinct flavor and if you've got good bacon these two things provide all the seasoning you need outside of S&P.

Okay, it's good, but how good? Well, at the end of the night here's what the dutch oven looked like: 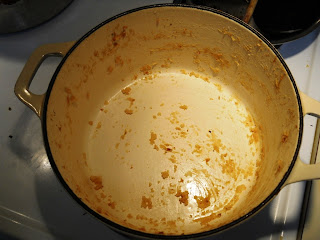 That's right. I ate the whole damn thing all by myself over the course of 4-5 hours, right off the stove top. 3lbs of potatoes, 1/2 lb bacon and 15-20 peppers, down my gullet. Could not stop and didn't want to. Such a simple and sublime dish. Having this on your stove top is a sign of good living. I think if you were to cook this for game night, probably double the recipe.

In Conclusion: Digital Orc's Dad got this dish right and is presumably a genius. It embodies everything I love about rustic one-pot cooking. 4.5** of 5 stars


*   I've been looking at some older posts from Grognardia, The RPG Corner, Jeff's Gameblogs and DNDWPS lately and it's shocking to see how many ideas I think are new have been circulated in the OSR back in fucking 2006 or 2008. Prog rock RPG setting? Yes, it's been done.

** I need to leave open the possibility of something even more awesome than this dish; otherwise, 5 of 5.