Why Wait 'til Name Level to Build a Skateboard, or a Stronghold for that Matter?

From your itinerant Spawn of Endra, now living in PA.

So I'm now living in the mighty state of Pennsylvania, where a singular legacy of democracy and freedom somehow sits comfortably with Kafka-esque liquor laws. I may eventually tell of a few of the highlights of the journey from Oregon, but my sense of humor about that last 4 weeks no longer exists. Don't move, folks. It sucks.

Last night I pulled out my Lab Lord stuff and was trying to figure out what sort of a stronghold, or even just a house that my PC Innominus, the Level 6 Cleric of Endra, could build with the ~6300 gp of loot so far accumulated. I looked over the table of construction costs on p. 127: 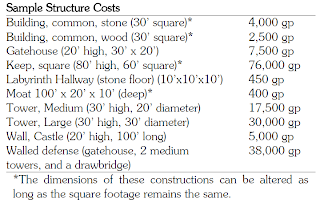 I figured, well, maybe I can just get a 100' of castle wall 20' high, and then I can put a moat around that, and just pitch a tent in the middle for the time being. I started sketching this on a new pad of A5 0.5cm graph paper (Wuh-whoa! I'm suddenly making an LotFP supplement!) and quickly remembered from 9th grade Trig that a circle encloses the largest area of a given circumference. Then I saw how a castle wall is 10 feet thick! Great! I sketched out something that looked like a donut: 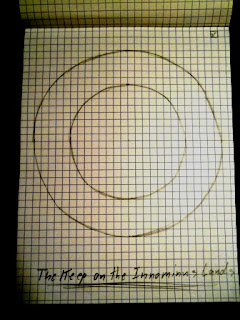 That was mildly amusing, considering there are no gateways or doors ... and I hadn't even put the moat on there ... but then a morbid feeling began to grow and I thought "This is such a stupid thing to do, you should save up your money and do it all at once. What good does a castle wall with no doors do you? You can't do anything with that." Huh, that sounds familiar. And unbidden: a scene from 1984-85 came to me, when I was dead set on buying a single wheel for my skate board, despite the attempts of several people to dissuade me. Compare: 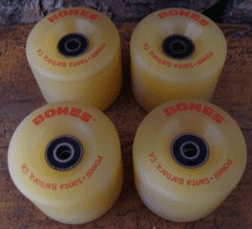 Ring any bells? Useless cylindrical thing? No function on its own? Tower with no door? Right. These are not the exact Bones wheel I was trying to buy, I think it was the Bones III, even bigger and fatter things. The wheel was for my Kamikaze skate board. "Oh!", says my generous reader -- who thinks far too highly of me and over-estimates how rich/cool I must have been in early 80s Fresno -- "you had a Sims Kamikaze! That is so old school, gnar-gnar, etc.!" 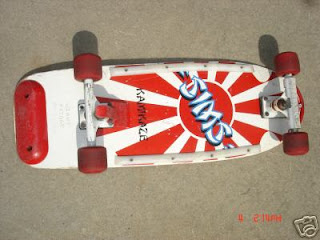 Ah ... no. It was the cheap-o Action Sports Kamikaze that my mom bought at Gemco for me: 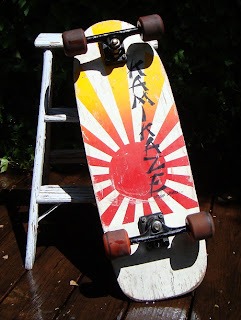 BUT! It was not the NASH 1970s banana board that they still sold at Gemco and was owned by this kid we knew to be white trash from Parlier or Turlock or Coalinga. As long as there was someone else to shit on, then one could maintain his or her dignity. I know I did my part to maintain the dignity of some neighborhood shitbuckets. But I also severely sabotaged their BMX bikes, and paid them back in other ways. Such was life in Fresno.

Anyway, one time I had $8, and my friend Reggie had held up his end of some deal with his parents and so was going to get a new board or something ... maybe just the deck. So I went along to probably Wavelengths, not the one in the mall, the other one off Blackstone (at Griffith? Maybe Telecanter remembers the fair city then?) and was determined to buy some non-cheap stuff for my board that would give me status and cred (for a 10-11 year old). In the event, $8, even then, would not go far in a shop like that. After the obligatory T&C yin-yang stickers, the sex-wax pucks that smelled like coconut oil and served no purpose to anyone in Fresno (but were reputed by my friends to be an aphrodisiac if you ate it ... both for males and females ... for males, at least, I know it doesn't work folks) there's not much to buy.

But I gradually narrowed it down to some Bones III wheels. I think they were at $6 each. I had $8. The guy asked me what I wanted. I said one wheel.

Reggie's mom weighs in. "But you can't do anything with one wheel. Just save your money."

Store guy: "But you'll wear it down before you get the other three, then you'll need to buy four anyway."

Store guy: "Okay. Here it is." Plops it on the counter.

SoE: "Wait this is different. How does it go on my trucks?"

Store guy: "You need bearings to put in 'em. That's a dollar each and you need two."

(These were, I should add, genuine Powell/Peralta bearings, and as much as the price burned me, I was glad to get the good stuff.)

The total price was then $8. Fine. I had my wheel with bearings. It was a hard won victory but a victory nonetheless.

Well, yes, that was the era where I didn't figure taxes (6%) into things. Crap.

I managed to borrow 50 cents from Reggie or his mom, and dealt with the disapproval and being berated not only by her, but by my MOM when she got home from work. I had to explain why I had wasted HER money. She always thought my money was her money back then ... crazy.

SoE: [To his mom]: "Yeah, maybe I'm 10 and I don't have a job, but you GAVE me the money and so it's MY money now."   [Living with this crazy Mutternweltanschauung (as it were) is probably why I stole my first d30 and several Go-Bots that same summer rather than paying for them.]   "Fine, mom, I'm not spending YOUR money, I'm just shoplifting! So these aren't YOUR Go-Bots now and you can't take them away from me!"

My latent mutant power was Jesuit-like argumentation, it turned out. But it was stupid. I bought the Bones III wheel, but I never used it. I remember the receipt sitting there for quite a long time, but I never returned the wheel.


Back to D&D
Anyway, what does this do for me now? I'm not going to build Innominus a stupid fortress like this, because neither Innominus nor I are that stupid nowadays. But I like the idea of building a dwelling and connected dungeon piece-meal, as the builder could afford to do it, say at 3000-15000gp at a time, and see what comes of it. The builder may not be mad, but is single minded, obsessed. Maybe the Winchester Mystery House is a useful model. The builder (s/he) is also not name level, and has to devote a great deal of time to getting loot to support the project. Because s/he is away so much, the construction supervision is often lax in the early stages. At any rate, any available money is put into construction. If there's only 450 gp for the month, all that is built is one 10x10x10' passage of the dungeon.

That's the longer term project. I'll sort out the details in ensuing posts.