The action resumed at dusk on Day 147 of the party's Arandish adventures, with the group standing around the corpse of a recently slain T-Rex atop a rise at the extreme northeastern end of a place I'll call "The Valley of Danger."*

Looking back southward along the length of the valley, the party noticed a tall, flat-topped mesa out in the valley center. This feature was not visible to the group when they passed through the valley itself -- they surmised that they missed it when they veered off the trail to pursue those neo-otyughs to their hidden cave.

Hazel sent her kestrel on a flight over the mesa, and since she can see what her familiar sees, she saw a switchback leading up the mesa's south side, and several huge nests atop the table mountain, one of which currently held a toothed pteranodon. The party decided there was no reason to go back and mess with the mesa.

Night fell. The PCs camped near the corpse of the T-Rex, posting watches. During the night they were visited by a group of three large, amorphous shamblers that approached from the northeast. Guessing that the shamblers were interested in the Rex corpse, the party retreated several yards to the southwest. Indeed, the big things gnawed and feasted on the dead dinosaur, and were soon joined by three more of their kin. This feasting lasted most of the night; about an hour before dawn, the uncannily quiet quasi-humanoids shuffled back the way they came, and were not seen again.

The next day dawned cold, and the Minochians in the group (Fuzz and Yor) knew that the snowy season could commence any day now.** They hurried northeastward toward the frontier town of Fortinbras.

As they traveled, the party members discussed various possible plans for the immediate future, including:

- pursuing the mystery of the origins of the saurian balrogs from Session 35, including possible uses for the obsidian key and teleporter chits*** those demons carried

- buying and exploring the "haunted mine" in Farn Junction

This last plan won out, in part because Yor had previously dispatched his associate Darvey to visit the mine (currently owned by the Frigglestone Bros. of Farn Junction) as a consulting inspector. The party figured with Darvey on the inside, it would be a cinch to convince the Frigglestones to sell them the shut-down mine. 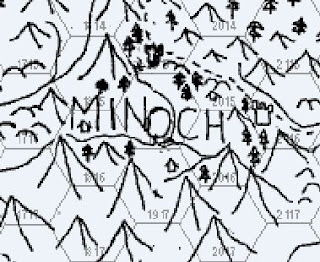 Central Minoch.  The town in hex 2116, to the right of the "H," is Fortinbras.  The larger town of Farn Junction is in hex 1915, above the "O."
Late in that travel day, Day 148 of their Arandish adventures, the party was attacked by a couple of undead yeti, which were swiftly dispatched in part due to a fortuitous critical battle axe strike by Yor. That night the group camped out about a day's travel southwest of Fortinbras, in hex 2016.

The next day began colder than the previous one, and the party could see snow on the higher slopes of the surrounding hills and mountains. Pulling their furry winter garb closer around them, they climbed aboard the War Wagon and made for Fortinbras, which they expected to reach that afternoon.

However, just a few hours outside the Fortinbras town walls, Hazel, who sat in the back of the wagon, saw a fin cutting through the dirt of the road behind them, swiftly gaining on them. She cast speak with animals and attempted to convince the fin's owner -- presumably a landshark -- that there was better prey to be had further up the road, to no avail; the voracious beast kept coming their way.  Hazel raised the alarm just as the fin passed underneath the War Wagon and a terrifying bulette emerged from the earth to attack! 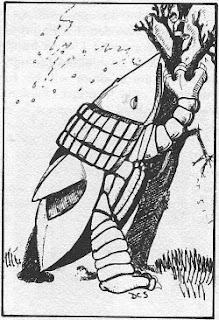 The Bulette, a legendary monster I have literally never used nor encountered in a campaign before.
Yor reined back the horses and stopped the War Wagon, readying his dwarven axe for combat.  Dak drew his weapon and took a stand near the horses, meanwhile ordering his follower Rodney to man the War Wagon's ballista.  Yor, still loosely gripping the reins, leaped to the ground, and he and Dak ganged up on the breaching landshark, taking a couple of nasty claw swipes but evading its deadly bite as they cut it down over the course of four rounds.  Yor finally dispatched the thing by rolling his nightly d30 roll, getting a natural "12" result for the damage, to which he added his significant strength modifier.

The party removed the bulette's fin, claws, and teeth, and resumed their course along the road to Fortinbras, arriving in the familiar town just after nightfall.  They proceeded immediately to their own house, noticing along the way that Prince Arkus' royal guards were posted at nearly every street corner, and were patrolling the streets in groups of two or three.  These guards looked like they had been in town awhile and were getting comfortable with their situation.

After dropping off gear and horses at their house, the party split up: Dak and Yor headed for the King Hargon Inn for some dwarven ale and to boast about their recent exploits, while Hazel dressed in some fine city clothing and made her way to The Crown, an Inn on the northeast side of town catering to the affluent, aristocratic set in Fortinbras.  She sought news and information about the recent activities of the Prince, and decided to utilize her power of ESP to that end.  She cast the spell and surveyed the bustling main room of the upscale Inn.

Most of the assembled minor nobles and rich townies were thinking about the recent disappearance of the middle son of Lord Margoth, an eleven-year-old boy vanished for three days now.  But one nobleman in particular, a tall fellow with white hair wearing a fine black cloak, was thinking other thoughts entirely, mostly reflecting upon what seemed to be memories of things he'd seen. His mental attention oscillated between two key recurring images:

- a young boy tied up in the fetal position in a dark, anonymous cellar

- an older humanoid figure in a concealing brown robe, being hanged from the neck in a wooden shack, doing a "death twitch" dance as it dangles

Furthermore, this white-haired nobleman seemed to take pleasure in dwelling on these images, though he did not show this on his face.

Hazel waited around a couple hours, during which time she used her ESP to pick the name of the white-haired noble -- Count Dooku -- out of the mind of one of the other patrons. When Count Dooku decided to leave The Crown for the night, Hazel followed him out onto the street. He turned east; she followed at a block's distance, keeping to the shadows as much as possible. After a few blocks of tailing Dooku, Hazel noticed that she herself was also being tailed, by a gray-robed figure, possibly human.

Marshaling all her espionage skills, Hazel swiftly ducked down a relatively empty side street, passed her own cloak off onto the back of a stranger headed the same general direction, donned her bear suit, and circled the block to hopefully outflank her own pursuer. She succeeded; the gray robed chap followed her decoy for a couple blocks, and Hazel followed him. Then she ran up behind him, zapped him with her wand of paralyzation, and carried his inert body into a dark alley to frisk him.

She learned that he was a member of a local wizards' guild, since under his robe he wore a telltale brown sash embroidered with the guild's rune. He also carried an ornate dagger in a sheath and 5 gp in a coin pouch. But nothing to concretely identify him.

Dooku himself soon circled back as well, and when Hazel emerged from the alley she saw him, accompanied by two of Prince Arkus' guardsmen in their yellow and crimson liveries, at the far end of the street. Hoping they hadn't seen her yet, she wrapped her paralyzed ex-pursuer in a bolt of fabric she kept in her bag of holding, ducked into a peasant's bar, and sent her kestrel to retrieve Dak and Yor from the King Hargon. They came, and Dooku never found any of them in the scuzzy little serf hangout. Eventually they snuck back to the King Hargon, took a room, and tied up the paralyzed wizard.

HAZEL: "Why were you following me?"

The PCs took turns standing watch over their prisoner, and the night passed.

--
* As I revealed last session report, "The Valley of Danger" is an alias; I cannot yet reveal the true name of this locale.
** Devotees will recall that there was a light dusting of snow on the ground when the group reached the village of Wellspring at the end of Session 38, but the "Valley of Danger" was several degrees warmer than the surrounding area.
*** Warren the Black identified these chits as "Morag's Gate Keys" during Session 36.