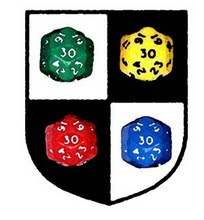 The Rusty Battle Axe recently posted a d30 table for Random Blog Topics.  I accepted the challenge, rolled a 15 on his Table, and got a result of "Lions, Tigers and Bears."  Secretly, I had really been hoping to roll an 18, for a result of "The Best Names for Taverns, Pubs, Inns and Bars," but I felt honor-bound to stick to the roll and started composing some thoughts on Lions, Tigers, and Bears:

I am quite fond of large predatory land mammals, and although I have more gut-level fear of sharks than polar bears, I harbor a healthy respect for large land creatures, and lions, tigers, and bears are all three types I would just as soon never meet in real life.  For that very reason, I think they make excellent low- to mid-level foes for wilderness-adventuring parties in D&D, and Ara's forests, swamps, and mountainous regions are populated with some particularly dangerous varieties.

I then planned to write up stats for a few such creatures -- only to realize I had no good ideas, or at least no new ones.  With big cats, I think I pretty much blew my wad with the Swamp Tiger, and although I'm obsessed with mountain lions right now, the mountain lion already has stats in Labyrinth Lord (p. 67).

I also wanted to do a B/X conversion / slight modification of the polar bears belonging to the Frost Giant Jarl in module G2 -- only to find that, once I looked them up, those bears are statted as Cave Bears, also already described in Labyrinth Lord (p. 64)!

So, at a total loss, I finally decided to do what so many of my great heroes and forebears throughout history and fiction have done: cheat!  I granted myself a bonus of +3 to my d30 roll, which gave me a result of 18, or The Best Names for Taverns, Pubs, Inns and Bars.  Here goes:

A great many of my inn and tavern names follow the formula:

What follows are some brief descriptions of a few well-known (and, I hope, well-named) bars in Ara.

The Impotent Owlbear
The Impotent Owlbear is one of the most popular merc bars in Redvine, in northern Achelon.  Many of the best caravan guards, swords-for-hire, northern monster-hunters, and Achelonian rangers frequent The Impotent Owlbear.  The tavern's name is meant to demean the deadly monster so hated by most of the pub's frequent clientele, and the establishment is well-known for displaying a huge owlbear skull above the front door -- reportedly a remnant from a monster the pub's owner, an ex-monster-hunter named Orgle, killed single-handedly many years ago before he started the pub.

Immensely popular amongst adventurers, merchants, and local nobles alike, The Hairy Ogre in Tradefair (The Western Lands) is named for its proprietor, a hairy yet affable ogre named Bob.  (Some actually believe that Bob is actually half-ogre, half-human -- he is short of stature for an ogre -- but Bob is proud of his ogrish heritage so no one says this aloud.)  The Hairy Ogre's main competition in Tradefair comes from the Dragon's Teeth Inn, and upscale bar catering primarily to rich traders and the more pretentious locals who haven't realized (or don't care) that the food prepared by the chef at Dragon's Teeth is vastly outclassed by Bob's legendary stews and inventive home-baked breads.

Noffellian bars are usually named for Noffellian heroes, kings, and gods.  Tarandis and Noffel are the most popular king names in this context, and in northern Noffel lots of bar and inn names have "Frey" in them somewhere.  There is a famous pub in Jakama called Zapar's Fancy -- with the best seafood in Noffel, some say.  Many Noffellian pubs love to include the words "sword," "iron," and/or "blade" in their names.

Telengardian Inn names tend to be matter-of-fact and serious, e.g., Wayfarer's Haven, The Ironcrown Tavern (both in Ironcrown) and the Silver Dragon Inn (in Hollyn).

In the Free City of Kaladar, there are at least sixteen different pubs and eating establishments with the words "Green Dragon" in their names, but the most famous one is in the Lord Mayor's District, and is called simply The Green Dragon.  (This "Green Dragon" motif is in fact popular throughout south-central Ara; there are a few Green Dragon Inns and Green Dragon taverns in Achelon, and a Green Dragon Traveler's Hostel in Greywood in western Delzar.)  The Greedy Lion in the dangerous North Wall District of Kaladar is known in certain circles as a place to pick up dangerous and not-quite-legal mercenary and courier work.  The single most famous (and expensive) inn in the Free City of Kaladar is the Hotel Kaladarian, formerly the Queen of Achelon's palace back when Achelon ruled Kaladar prior to the Free Kaladarian Decree of New Calendar year 60.

Lastly, despite my better judgment I must mention The Aroused Barracuda in Thieves' Port.  This is probably one of the seediest and most dangerous bars in Ara.  No one enters unarmed, and only one in six patrons (on average) walk out alive.  A tough place catering to those who don't want to be found nor fucked with.