My d30 arrived this weekend! 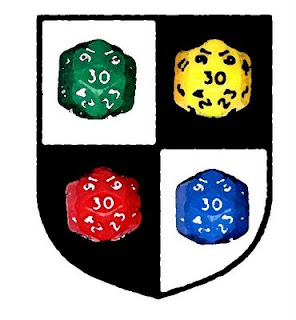 I just got my first-ever d30 in the mail this Saturday.  I had always heard about 30-sided dice when I was coming up in the RPG'ing hobby in the 1980s, but I never actually played in a campaign where anybody had one, nor did I own one myself -- until now!  Now that mine has arrived, I can proudly claim my membership in the Order of the D30, I was able to use it earlier tonight in Mutant Lord Carl's KILLER Mutant Future campaign, and I have been inspired to create a special new d30 table for random tavern encounters in Ara.  Enjoy!

Note: all NPCs are assumed to be human unless otherwise specified.
1:  A competent scout / guide approaches the party offering his/her services.*
2: An eccentric scout / guide approaches the party offering his/her services.**
3: A group of three dwarven miners sits at a table, drinking ale and talking amongst themselves.
4: A solitary young woman with a learned look sits nervously at a table.  She is a 3rd level Magic-User on the run from the Council or Noffellian authorities, and if approached in the right way, might hire the party as bodygards to escort her to the next town.
5:  A drunkard approaches the party and shares a (true) local rumor.
6:  A very erudite journeyman sage shares a (false) local rumor for 1gp.
7:  A young local scoundrel / cutpurse shares a (true) local rumeor for 1gp.
8:  At a nearby table, a 1st Level rodian illusionist is using his change self spell to appear human, allowing him to eavsedrop on another table of humans nearby.
9:  A Noffellian 6th Level fighter, who is an agent of the Noffellian High Guard, enters the tavern, scopes out the main room, and then circles the room, giving various patrons a description of someone the party knows and asking if they know where s/he is.
10: A drunk blacksmith approaches the party looking to start a fight with one of its members.  Armed only with a dagger, the blacksmith fights as a 1st Level fighter.
11:  A minstrel plays a song for the party then demands 1gp.
12:  A group of rowdy Mizarian barbarians is giving the tavern staff a hard time, and will attack anyone else who intercedes or intervenes.
13: A persistant traveling salesman attempts to sell the party some stolen goods for half their list price.
14:  A 5th Level Magic-User approaches any arcane magicians in the party and cautiously sounds them out about their opinions about the Council and the Invisible Hand; he is a recruiter for the latter.
15:  A rodian 2nd-level illusionist uses change self to impersonate someone the party knows, in order to lure one or two party members outside where the rodian and his colleague, a female rodian 3rd-Level rogue, mug them.
16:  Four richly dressed merchants get drunk at a nearby table, and eventually all but one of them leave, and the remaining fellow passes out.  The merchants each have 10-60gp on them.
17:  A man with an eyepatch enters the bar, approaches the characters, mumbles something about being followed, and drops a bag on the PC's table.  He then exits the tavern in a hurry.  Once on the street, he is followed by two assassins, who kill him on the next block.  The bag contains 50gp and an idol.***
18: A well-known local woman adventurer (Ftr - 2) enters tavern, swoons, and falls to floor clutching her neck.  She is dead, having quite recently been sucked dry by a vampire.  She will arise as vampire spawn tomorrow.
19:  A Kaladarian exotic weapons buyer will haggle with any PCs who have ornate or magical weapons, trying to buy their items off them.
20:  The barmaid is actually an assassin (Level 4) hired to kill one of the party members.
21:  A pair of lovers at a nearby table is actually a duo of spies hired to follow the party.
22:  There is an invisible rodian illusionist / rogue (Levels 2 / 2) picking pockets in here.
23:  An insane hill troll attacks the tavern, ripping off the front door and attacking those nearest within.
24:  A local farmer is selling the sexual favors of one of his sheep, 5gp per go-round.
25:  The security chief (Ftr-5) for a merchant caravan passing through town is hiring mercenaries to work as caravan guards.
26:  An agent of an organization hunting / opposing the party or its employers sees the party, then exits the tavern hurriedly to go report to his / her superiors somewhere nearby.
27:  A jealous, hot-tempered local merchant mistakes a party member for his / her spouse's illicit lover and challenges the character to a fight.
28:  A group of five Noffellian soldiers drink and talk boisterously at a nearby table.  Anyone who appears too obviously to be an arcanist will get harassed, even threatened by this group.
29:  A large cloaked figure enters the tavern and heads to the bar, where, after a few heated exchanges with the bartender, he throws back his hood, draws a battle axe, and kills the bartender.  The stranger is a hobgoblin.  After killing the barkeep, he will make for the exit and leave if unopposed.
30: The barkeep takes an instant dislike to the party (or at least some of its members) and refuses the party service.


Endnote: Those interested in 30-sided dice and their lore should also read Jeff Rients' review of some out-of-print Armory d30 books.