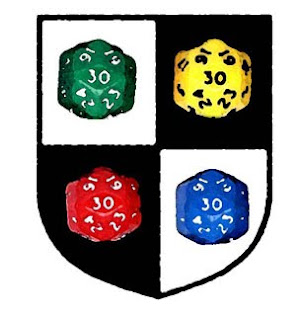 Not only is this a chance a blab some more about my recently-acquired 30-sided die, it represents the resolution of a fun little conundrum I've been facing in the arcane magic department.  You see, there was this spell from Crimson Blades of Ara, my co-homebrewed FRPG system, that I always really loved and wanted to create an analogue for for my upcoming Arandish Labyrinth Lord campaign.  The spell is called Alaxxx's Zib Flobble, and it is a kind of momentary fate-controlling (or at least fate-skewing or fate-randomizing) spell.  Here is the original spell description -- note that CBOA was a skill-based system that operated almost entirely on d% rolls:

Alaxxx’s Zib Flobble (CBOA version)
Range: sight.
Duration: 1 minute.
Invented by the mad Achelonian wizard Alaxxx Leprongo Kulikkx, the Zib Flobble spell allows the magic-user to make all percentile die rolls for the target, choosing the ones and tens die AFTER the rolls are made (deliberately aiding or hindering the target as the caster chooses).  This effect lasts for one minute of game-world time.  Obviously, the caster does not necessarily have any say over whether or not the target will actually attempt any skill, trait or combat rolls within that minute.  He merely gets to manipulate the results once the target has announced an action that requires a d% roll.  Unless the target possesses some special means for detecting magical curses, he/she/it will have no way of knowing that Alaxxx’s Zib Flobble has been cast upon him/her/it.

I was having trouble translating the intended general effect of that spell into LL terms, and that minute-long duration seemed both too complex and too powerful.  Then it struck me that the d30 was the key.  Once I had that, it was a simple step to realizing that I actually need two spells to generate the same range of random effects possible under the old Zib Flobble spell: thus I invented a new companion spell, Alaxxx's Zib Floogle!  Enjoy!

Alaxxx’s Zib Flobble (Magic-User spell)
Level: 3
Range: sight.
Duration: instantaneous.
Invented by the mad Achelonian wizard Alaxxx Leprongo Kulikkx, the Zib Flobble spell allows any character or NPC creature the caster chooses (except himself) to roll the referee’s d30 in lieu of whatever die or dice the situation normally calls for. The choice to roll the d30 must be made before any actual rolling has occurred. The d30 cannot be rolled for generating character statistics or hit points, nor can the Zib Flobble affect the outcome of secret rolls by the referee.  d30 roll substitutions granted by the Zib Flobble spell do NOT count against the d30 roll allotted each player once per session (see forthcoming Arandish Campaign House Rules).  Unless the target possesses some special means for detecting magical curses, he/she/it will have no way of knowing that Alaxxx’s Zib Flobble has been cast upon him/her/it.


Alaxxx’s Zib Floogle (Magic-User spell)
Level: 3
Range: sight.
Duration: instantaneous.
Another of Alaxxx Leprongo Kulikkx’s odd fate-changing spells, the Zib Floogle spell allows the caster to roll 1d30 and subtract the result from any other character’s or NPC’s (but not his own) just-completed roll.  This spell’s effect does NOT extend to any secret rolls made by the referee, and the Zib Floogle spell cannot be used against someone rolling for generation of character statistics or hit points.  Unless the target possesses some special means for detecting magical curses, he/she/it will have no way of knowing that Alaxxx’s Zib Floogle has been cast upon him/her/it.