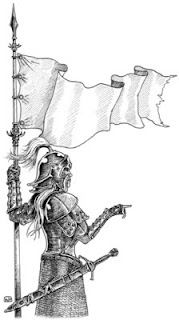 Achelon has seen many decades of restoration and growth since the end of the wizardrous Old War with its eastern neighbor, Telengard.  Due to prosperous trade with its southern neighbors, the kingdom of Noffel and the Free City of Kaladar, Achelon is presently one of the largest and strongest monarchies in Ara.  Almost all trade goods in Ara eventually traverse some part of the Endyn Trade Route, the most heavily traveled of all Arandish roads, most of the north-south length of which is maintained and taxed by the Achelonian Queen.

Matriarchal Rule
Achelon is a matriarchal culture, ruled by a Queen.  This is likely in response to the strongly patriarchal cultures of Noffel and Telengard, from which Achelonian people descend and against which they define themselves.  The southern half of the region now called Achelon was first settled around Old Calendar year 1000 by migrants from Noffel.  It would seem that those who favored matriarchal rule stayed on in this area, while those with a more patriarchal (traditional Noffellian) bent moved on northeastward to the Telegardian high plains.

The castle of the Queen of Achelon is located in Achelonia, in the southern half of the Achelonian realm.  To the present day, this southern region is more politically stable and geographically beautiful than the north, being made up largely of pastoral farmlands, fields of abundant crops, and dense but scattered copses and wooded areas. Southern Achelonians, being from the more agriculturally cultivated and “citified” regions, have every opportunity open to them: they are traders, farmers, merchants, militiamen, magicians, thieves, politicians—you name it.

In northern Achelon, looser government control combined with greater monster-related threats keep the region in upheaval. The Queen's influence is less strong here, especially in the region west of Achelon proper known as the Western Lands.  This northern area -- the Western Lands and Northern Achelon proper -- is heavily wooded, with large evergreen forests housing great and terrible monsters of all descriptions.  While Achelonian troops loyal to the Queen do keep minimal guard in the north, especially of the valuable Trade Route itself, for the most part, local barons have the run of the land.   Thus Northern Achelonians favor heavy projectile and melee weapons like long bows and two-handed swords, weapons that deter the kinds of large monsters that dwell in the region.

The Endyn Trade Route
The Endyn Trade Route is is the major north-south roadway in Achelon and Ara, and is the most-used road in Ara.  It circles the interior of the Arandish continent, connecting the dwarven mines and forges of Gannar to northern Telengardian cities like Freetown and Ironcrown, then running south through Achelon to Riverhold, then eastward to the Free City of Kaladar and the villages and towns of Delzar (e.g., Greywood, Bilnhof).  One of my most frequently used adventure hooks is to have a merchant hire the party to work as caravan guards on a mission along the Endyn Trade Route -- especially in the particularly dangerous stretches of the Route passing through northern Achelon and the Ghardash Wilderness region of Telengard. This hook works nicely if you want to start the campaign in the economic and cultural hub of Ara, the Free City of Kaladar, which sits on the border between Achelon and Delzar but is its own sovereign realm.  The road leading east out of Kaladar into Delzar is officially named the Kaladar-Bilnhof Road, but informally almost everyone considers this road an extension of the Endyn Trade Route and calls it by that name.

In southern Achelon and near the free City of Kaladar, the Endyn Trade Route is well-patrolled, both by Achelonian soldiers as well as Kaladarian Royal Guardsmen, who claim an active jurisdiction of up to fifteen miles out on all sides of the Free City.  Despite this patrolling, brigands and monsters will attack travelers and merchant caravans on the Trade Route in all but the most heavily guarded places (e.g., within sight of the walls of the Free City).  In northern Achelon, one of its most feared stretches, the Endyn Trade Route is kept somewhat free of brigands and monsters by Achelonian soldiers, traveling merchants and their hired caravan guards, and troops working for the northern landholders bordering it.  But this is a much more dangerous area and in the forests just beyond the northern leg of the Trade Route, wild and dangerous beings hold sway.

Legends of Mornlyn
The Spire of Mornlyn, called by many Southern Achelonians The Haunted Spire or Arlon's Spire, is the source of most of Achelon's darkest legends.  Mornlyn marks the site of the prison constructed by Arlon to hold the evil necromancers at the end of the Old War.  Given its noteriety, the Spire of Mornlyn is a frequent adventure destination for fortune- and legend-hunters, and is also a place from which people frequently never return.  It is an evil place.  The Spire itself is thin, pitch black, and approximately 300 feet tall.  It is frequently rumored that no one now living understands its true purpose or power.