Goblins
In Ara, goblins feature as a PC race only -- hats off to James Maliszewski for coming up with that idea.  That's right, you heard correctly, goblins are not used as monsters in Ara.  Use frikkin' orcs instead! 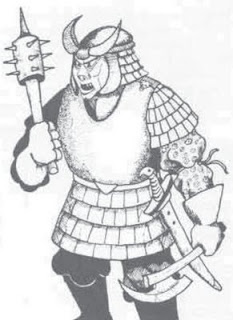 Hobgoblins
Like so many other monsters, Arandish hobgoblins are more powerful and feared than hobgoblins found elsewhere.  In fact, part of the reason for the virulence of Arandish hobgoblins -- and the source of the fearful legends that surround them -- may be the longstanding yet unproven rumors of a fiendish underground race of super-hobgoblins thought to dwell somewhere deep beneath Ara. . .

Arandish hobgoblins live primarily underground, and suffer a –1 penalty to all attack rolls when in full sunlight.  In Ara, hobgoblins are archenemies of dwarves, who they hate above all other humanoids (though humans run a close second).
Arandish hobgoblins seem to prefer large weapons like battle axes, two-handed swords, and heavy flails.  When in the presence of a hobgoblin king -- a 6HD hobgoblin usually accompanied by 1d4 4HD bodyguards -- all hobgoblins have a morale score of 11.  Hobgoblins are sometimes, but not always, encountered in mixed parties that include bugbears (40% chance).