Last week on Open Friday, James at Grognardia asked everybody in the OSR Blogosphere to name the one RPG we had never played before that would we most like to play in the near future. (In true Grognard style, he offered Bonus Points if it was a game published before 1990.)

I chose the one game that has always haunted / intrigued me the most, GDW's Twilight: 2000. 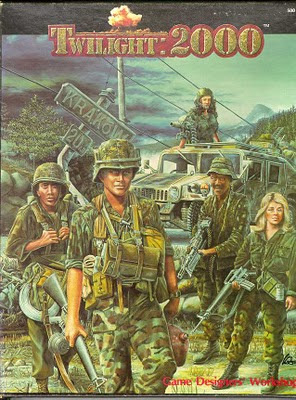 You see, like many of us grognards, I grew up in the 1970s and 1980s; I vividly remember the Reagan years, the concept of "Mutually Assured Destruction (MAD)," and watching The Day After on prime-time TV with my family. So post-apocalyptic futures did not seem so fantastical (or wacky) to me as they might to some; I genuinely feared the possibility of nuclear holocaust during my junior-high and high school years. So much as I loved Gamma World --and much as I totally enjoy playing Mutant Future today -- I guess I always saw the post-apocalypse as a pretty dark and grim place, a la movies like Mad Max 2: The Road Warrior and the highly militaristic RPG Twilight: 2000.

Then, lo and behold, Joe at Greyhawk Grognard called my attention to a pdf sale at Drive-Thru RPG on the Twilight 2013 Bundle!  For a mere $10 I could obtain pdfs of ALL the current Twilight: 2013 products released by 93 Games Studio!!  I could not resist.  Now, many joyous downloads later, I am one step closer to my Open Friday wish coming true. . .

(And while I was scouting Noble Knight for Twilight: 2000 box cover images, I noticed that they have the first edition of the game available for a very reasonable price too. . . . does it never end?)